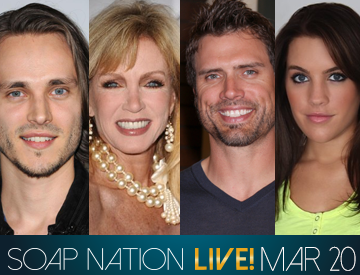 Soap Nation Live with Michael Fairman is back for its second installment of it’s monthly Internet Radio series this Thursday Night, March 20th beginning at 7PMPST/10PMEST!

Joining Michael throughout the 90 minute broadcast will be a stellar line-up of special guests that includes: Knots Landing favorite Donna Mills, who just debuted this past Friday as Madeline Reeves on General Hospital, The Young and the Restless Joshua Morrow (Nick Newman), General Hospital’s Kristen Alderson (Kiki) and Nashville’s, Jonathan Jackson (Avery)!

During the live broadcast listeners will have the opportunity to call-in and pose a question or comment to our guests during their segments.  The call-in line is 877-564-9088   In addition, listen in for your chance to be part of our game show segment, where you can win a very soap-centric prize and much more!  To listen to the live broadcast go to Blog Talk Radio to our Soap Nation Live page and click here!

Soap Nation Live is also part of iHeartRadio, which is a free all-in-one digital radio platform.  You can also listen to the show when its uploaded shortly following the live broadcast that has aired.  And if you want to take the episodes of Soap Nation Live with you on the go, you can download it through the iHeartRadioapp!  In addition, the live broadcast can also be heard live right here at Michael Fairman On-Air On-Soaps, just look for the post shortly before showtime in the “Latest News-Soap Buzz” section.

If you have a comment or question for any of our guests, you can post them in the comment section below and we will try to ask a few of them on the air.  Just tell us your first name, and the city you are from in your post, along with your question or comment.   We hope you will enjoy the show!

Juan Pablo Ditches His Association with THE BACHELOR For Upcoming Nightclub Appearances!

For Donna Mills…have you any scenes on GH with your former ‘Love Is A Many Splendored Thing’ costar Leslie C. who plays Monica? If not id like to see that happened…they should make your character of Madeline and Monica estranged sisters who havent acknowledged each other in over 40 years because Maddie and stolen Monicas boyfriend…Ninas father from her!!! Kind of a nod to your old cbs soap!!!

I’ll just be happy to see Mills complete her two-month contract let alone mix it up with the seldom seen Monica Quartermaine.

Joan Collins and Joan Van Ark (“Guiding Light” and “Young and the Restless”) were unable to complete the terms of their daytime runs.

Im suprised Joan Van Ark couldnt handle it both she and Donna Mills both had soap roles in daytime back in the 60s and early 70s so you’d think they wouldnt have such problems but i guess it might have been different back then for them!!!

Poor Bill Bell would be rolling if he seen what Jill F. Phelps has done to his show and beloved characters. Really making a women grieving for her daughter go through ETC treatment and killing off little children for Halloween. What is she planing for an encore someone trashing up Mrs Chancellor’s remains.

1. Any chance of a GH return during your Nashville summer hiatus?
2. Will we ever get to meet Avery’s family or learn more of his backstory? Do you have a backstory for him in your head?
3. How do you think Avery and Lucky are similar and different?

Don’t expect JJ to talk about any potential return to GH, why would he want to return to a show that was brilliant for most of his tenure and is now mostly a shallow cartoon. JJ would just try to be diplomatic only to bear the brunt of the arrogant and juvenile Ron Carlivati’s Twitter feed shortly thereafter….

Love your other questions though.

Now that your daughter is off to college, how are you handling the “empty nest syndrome” and do you have any other roles coming up in the future. Love to see more of you!!