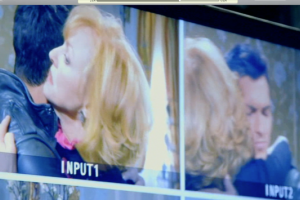 In more heart-tugging videos preparing fans for the return of the beloved soaps, All My Children and One Life to Live, The Online Network today released on the shows iTunes pages, “First Day of School” video clip packages which features the first days that the production of AMC and OLTL began in their new studios in Connecticut.  The two-minute videos are downloadable for free!

In the All My Children video, it is executive producer, Ginger Smith who provides the emotional narration as viewers witness hugs between cast mates including Thorsten Kaye (Zach), Cady McClain (Dixie) Debbi Morgan (Angie), Darnell Williams (Jessie), Jill Larson (Opal) and more.  Smith ends the AMC video “school: video with the line, “I would say just tune in because there are going to be a lot of surprises. This isn’t necessarily going to be your mother’s ‘All My Children!”‘

Prospect Park’s  head honcho, Jeff Kwatinetz is also seen relating to the cast of AMC on their first day, “Thank you, if anyone needs anything…I’ll be around for the next 41-years, I hope.”   The video is set to the tune of  Raphael Lake and Ben Harper’s “Light it Up” and how apropos!

In the One Life to Live, “First Day Of School” video on iTunes, it’s Florencia Lozano who gets the call as the actress to utter the first swear word on the reboot with the mini spoiler, when Tea Delgado reams out Matthew Buchanan (Robert Gorrie) for letting Dani (Kelley Missal) do drugs!

Next, One Life to Live executive producer, Jennifer Pepperman is seeing rallying the on set troops to begin production on OLTL on March 18th when she expressed,  “As I stand here overwhelmed by all the talent, compassion, intelligence in this room. I know we are gonna knock it out of the park. And I’m not talking home run, I’m talking grand slam baby! Let’s go crazy, let’s get nuts.”

The video is set also to the tune of  Raphael Lake and Ben Harper’s “Light it Up”.  The two -minute videos are part of exclusive continued content for the  iTunes page of One Life to Live and All My Children.

Watch both the videos, then let us know, did it bring a tear or two to your eyes? Are you ready for April 29th? What was your favorite moment from the “First Day Of School” videos?  Let us know!

TONIGHT: Dallas Two-Hour Season Finale! Patrick Duffy Says,"One of the best executions of a cliff-hanger in the history of Dallas!"

Australia's Channel Nine Axes Days Of Our Lives After 45 Years!

Everyone new promo released makes me smile. The New OLTL promo with the new EP calling a grand slam and the fans did bring a tear. I am still watching the OLTL preview and getting emotional at the beautiful sets and costumes, the cast I love and excited to Shelter and all that happens there. I have never watched AMC but I am ready and willing now

One Life’s “First Day of School” doesn’t seem to be available yet…at least not in my iTunes Store.

Every time I see these new promos, I get emotional and pumped up at the same time. Jennifer Pepperman “grand slam” comment is on the money because for me, this is a beautiful grand slam that these soaps are back. Of course, the icing on the cake for me is my girl, Tea “F-fantastic:)” Delgado is keeping it realz:). Thank u Agnes Nixon, Prospect Park, show crews, actors, fans, and everyone involved in breathing new life into these shows and last, but certainly not least is thank u Mr. Fairman:-) for all that u do for the soap community to… Read more »

I love Florencia (Tea) as well. I just love how Flo makes you forget she is acting. I only wish I could have seen the clip before it was taken down. I am surprised they didn`t re-edit it and re-post it 🙁

This is wonderful. I’m so excited.

I’ve gotten onto Itunes and the videos are nowhere to be found. I’d love to view them but I can’t. Can someone assist me?

I can’t find the newest video (first day of school) on the oltl page it just has the 3 previous videos. AMC has theirs up I downloaded that one in case they shared it but that is only AMC and I don’t care about that one. Did they take it down for some reason. I really want to see Tea tearing into Mathew

I hate iTunes..
It was the most evasive program I ever had in my PC and I took it out and freed up a huge amount of storage space getting rid of the bandwidth thief..
dumb thing was in my drivers etc too..
And it is a nightmare to navigate,, confusing.
I go to Amazon for my movies, download music etc..
One clean click and the download is done and music mine 🙂

I know some people will be forced to use iTunes to watch the 2 soaps, but HuLu is 100 times better and one click.
I will stay with HuLu:)

So far, I agree with you. Just signed up with iTunes today. The customer service person I spoke with had no information about OLTL or AMC. He didn’t seem to have heard of either and certainly had no information about them being available on iTunes. What he did tell me was episodes of TV shows cost $2-$3 per episode or a bulk rate of $26 per series season. He said we would have to wait until the shows air to learn the actual price of these shows. If this is true, and I’m not sure it is since this guy… Read more »

If you’re looking at more than 8 shows a month, Hulu plus is cheaper

I’ve been re-loading iTunes and checking Hulu and can NOT find this clip!!!

I watched the OL clip earlier,and Tea definitely drops an F Bomb,but when I went to watch again,the clip had been removed from ITunes.

Can someone post a link so we can see it if we don’t have itunes?

It’s not listed on iTunes. Apparently there is rumor it was pulled. I watched the preview video and when it ended the list of videos showed up with the newest one. I had watched it earlier so I’m not sure if that is why it popped back up that way.

Oh, PP pulled the OLTL video because they were careless and might have made a confirmation they wished to avoid. We missed it. I hope someone can post it for us.

I saw the video yesterday morning when it first came out. PP pulled the video a few hours later because in it someone put a scene in a hospital and in the background in a far off doorway was Trevor St John(Victor Lord Jr). I guess his being on OLTL was supposed to be a guarded secret but SOMEONE boobed up big time.

That is fantastic news. I so want Trevor back.

not the real Todd Manning – his twin Victor Lord Jr. The real Todd is played by Roger. But love them both. Since both showed up I like Todd with Blair and Victor with Tea cuz they are really good chemistry together> It goes to show all for actors are great because no matter which combo they are currently in they are all good.