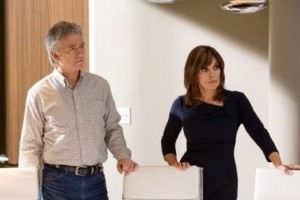 Tonight the question will be answered! Who killed J.R. Ewing? There is a line-up of suspects including: Cliff Barnes, Harris Ryland, Pamela Barnes Ewing, Pamela Rebecca Barnes, or perhaps one of J.R.’s former mistresses and wives who returned for his funeral for a millisecond?  Or, is it someone else on the canvas?  Or, did J.R. take his own life, perhaps knowing he was ill-fated?  The two-hour season two finale of Dallas airs on TNT at 9EST/8CST!

Series star Patrick Duffy spoke to TV Guide relating what he thinks of the big shocker on tonight’s finale: ” I think writing for the last episode of this show is one of the best executions of a cliff-hanger in the history of Dallas.”

Duffy also spoke with Access Hollywood about the possible re-emergence of Pam (Victoria Principal) who many feel is behind J.R’s offing, and how the “Who killed J.R.?” answer will be revealed stating, “Well, what I can hint at is it is so ‘guilty party paying for their deeds.’  It is a remarkable resolution to that, which is the ‘master plan.’ So the end of the show turns out exactly the way (J.R.) planned it in this master plan, but it’s a resolution that I don’t think a single audience member will say, ‘Oh, I knew that was gonna be it!’ Nobody’s is gonna know and everybody’s gonna be surprised as to who shot him.”

In regards to a Principal return, Duffy stated,  “We’ve been dangling that carrot now for two reasons. One… it’s always good to hang an old girlfriend or wife out in front of the hero when he’s happily married. That’s a great thing to do, but also there’s issues with sons and family and being abandoned and all that stuff, and that’s a lot of red meat for (Jesse Metcalfe’s] character. So almost everybody has a reason to be interested in the Pamela character and will she or won’t she, which also then means Victoria (Principal) — will she or won’t she? This is great stuff for the audience and great stuff for us because it’s so typical ‘Dallas,’ isn’t it?

So here we go, who do you think will be revealed as the killer of J.R. Ewing?  Do you think Victoria Principal will be seen in the final moments of tonight’s two hour season finale of TNT’s Dallas? Weigh-in on some of the hottest buzzing questions in soapland!

BREAKING NEWS: FX Canada To Broadcast New Episodes Of All My Children & One Life to Live!

TOLN Releases "First Day Of School" All My Children & One Life to Live Videos on iTunes!

The ultimate in reveals. Dallas hid Larry Hagman away in Mexico for 8 months and he will show up at the end really alive…. Only in Soaps lol.

Like i said in the past I still like to think J.R. staged his own murder knowing he was dieing anyway to frame anyone of his enemies just to get the last laugh! It just sounds like something this slick schemer would do!

if they were to “recast”

does any one – remember Jed Allan, C.C. Capwell… from Santa Barbara?

dang! he fully embodied…. what J.R. did.

I miss that soap more than i do OLTL! I remember Santa Barbara: C.C Capwell, Mason, Kelly, Ted and poor Mary who was done in by the capitol C that fell on her while she was on the roof of the Capwell building. and i always loved Gina played by Linda Gibbony? then Robin Mattson. Now that was a fun well written soap that shouldve never been cancelled. P.S. i doubt theyd bring back J.R. especially as a recast. Plus i remember Jed Allen on Days as Don Craig!

After watching last nights cliffhanger, seems my guess is correct?

If Victoria Principal shows up at the end of tonight’s ep, it will be the best cliffhanger since Bobby appeared in the shower! 😉

Am I alone here? I do not care to see Pam return in the body of Victoria Principal or anyone else. I am finished there. And it seems wrong that Pam would turn evil as she was the one who wanted to live without the Barnes-Ewing feud shading her and Bobby’s life.

Last nite’s episode was very anti-climatic. I understand they had to re-do the 2nd half of the season, in a very short amount of time, to account for Larry Hagman’s death. Still love the show, still gonna watch, but I’m just saying. I’d like to see them re-ignite the John Ross-Christopher feud. John Ross was already in the gutter, gonna be fun to watch Christopher join him.

Oh I’m sure there will be plenty of future feuding.
John Ross following in his daddy’s footsteps – cheating on his wife (the scoundrel).
Elena learning of the Ewing dirty dealing regarding her father’s land.
If in fact it’s true and not some contrived plot by Cliff.
Oh there’s def gonna be some fireworks.
Can’t wait.

Broke my heart to see John Ross cheat on Pamela at the end. They are so good together I don’t want their marriage to be some quickie mistake. I want John Ross to be madly in love with Pamela so this lasts a long time fighting, and loving. Couldn’t wait for the finale and that left me sad.