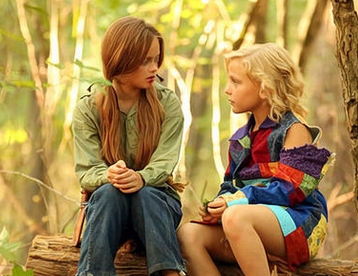 Several soap opera notables are part of the production including: Alyvia Alyn Lind (Faith Newman, The Young and the Restless) who stars as 9-year-old Dolly.

Coat of Many Colors also stars Jennifer Nettles as Parton’s mother, Rick Schroder as her father and Gerald McRaney as her grandfather. The movie was written by former soap actor and writer Pamela K. Long (Guiding Light, One Life to Live, and Santa Barbara) She executive produces with Sam Haskell and Dolly Parton.

Also in the production is none other than Hannah Nordberg, the former Josslyn Jacks of General Hospital.  Nordberg plays a new friend of the young Dolly in the TV pic.

In a review by the Los Angeles Times they the relate on the writing of the special: ” Much of Long’s best writing — again, not surprising, given her background — occurs in the scenes between Parton’s parents as they work out their difficulties and differences, and Schroder and Nettles take their measure nicely.”

So, will you be checking out Alyvia and Hannah in Coat of Many Colors written by former soap scribe, Pam Long? Comment below!

I love seeing soap stars working in different projects! I also LOVED Pam Long’s writing. Her Guiding Light was full of heart, and humour, love, and down home classic storytelling. She would be a good fit for any of the 4 remaining soaps except Bold and Beautiful. The one show that needs writing shake-ups never gets any!!

She might have been good on Guiding Light but she ruined and destroyed my favourite soap Santa Barbara . I pray she never works on daytime soaps ever again ! It ‘s because of her that Santa Barbara got canceled , there were other reasons too .

I can’t wait to see this movie. I have the DVR set up for it.

I think Alyvia is great. I’ll be watching.

Alyvia was great. This kid is going places. Her affectation of a Tennessee accent was so believable. And, her acting not do shabby, either…LOL. Wow!! Impressive!

Loved Hannah Nordberg on GH! Still can’t believe Tbtb recast the role over one appearance!! The new Joss has only appeared once!! I’ll definitely watch because of her!

I abbsolutely hated Pam Long’s writing on Santa Barbara . The whole BJ Walker story which was recycled plot from the rape of Christy Duvall storyline in 1985 ( the Christy one was great and Tricia Cast was brilliant as Christy ) , Cruz divorcing Eden and getting involved with kelly ( a Kelly who by then was atrociously recasted with Eileen Davidson , nothing against Eileen but totally wrong for the Kelly part ) , Ted Capwell recasted with actor Michael Brainard and hooking up and marrying Gina’s daughter Lilly . If Cruz and Eden never returned to the… Read more »

What a wonderful vehicle for two-time Emmy®-winner PAMELA K. LONG!! She will always hold a place in my heart for what she did for GL: not only creating the characters of “Reva”, “Alexandra” and “Harley” (and showcasing three of my favorite actresses Zimmer, McKinsey and Ehlers respectively) but she led GL to dethrone powerhouse (and time-slot competitor) GH for three weeks in the summer of 1984. She also lent her talents to TEX and OLTL, as well as SFT and SB (…which both were cancelled on her watch unfortunately!) Bring her to Genoa City (to reunite her with Phelps) where… Read more »

Pam Long was a great writer for Guiding Light. Can we bring her back and GL too?