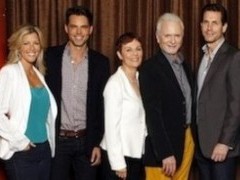 Tonight marks another milestone in the continuing celebration of General Hospital, who this month turned 50 years young!

Emanating from the Paley Center for Media in Beverly Hills, many of your favorite stars and series executive producer, Frank Valentini and head writer, Ron Carlivati will participate in a panel discussion in front of live theatre audience discussing the history, favorite moments, crafting the show, and moving forward with the ABC series.

And for those who want to check it out tonight live from their computers you can watch it on the Paley Center for Media Live Stream here starting at approximately 7:15pm PT/10:15 ET.   You can also follow the action on social media @paleycenter on Twitter and use hashtag #PaleyLiveLA to join the conversation.  Andm if you are on the go tonight you can watch the live stream on the Paley Center app.

Let us know if you will be checking out the event tonight?  What are some of the questions you hope are posed to the GH panel!

All My Children's Cady McClain on Susan Lucci, Poison Pancakes & Dixie and Tad!

Jesse Metcalfe On DALLAS Finale & A Victoria Principal Return: "It's Possibly Going to Happen for Season Three, But Not Season Two!"

Michael, is the event open to the public or was it something you had to purchase tickets to in advance?

I tried to log on to see the live stream and it says you have to purchase tickets. $15 for non members and $10 for members. If you want to purchase, it says tickets sales for the event is closed and check with the box office 🙁

I would mostly like to thank them for a job well done, and keep up the good work to the cast and crew! Then will Kristen be Serena or Kristina, Roger be Steve or a Cassadine, and will Micheal be Jimmy Lee and ELQ heir, or maybe play Jason so they can continue to pair him with Sam?

Michael do you know if they will have this on the Paley site to view in the future? I went on their site and they don’t say? I will be watching for as much as I can tonight. Love the Paley sessions with the shows!

This was an extra act of GH, and so much fun. When the host talked about all the actors who are not around any more, it was really touching how affected every one was. Just remembering Edward and Lila and their love, was so touching. The Paley center should do more of these get togethers from time to time. Many fans would appreciate hearing the actor tell his or her story. Frank and Ron have energized GH with their creativity. Bravo to them!…

Thanks, Michael, for sharing the link. I actually watched the live stream earlier. Very interesting indeed. RC mentioned about populating the Quartermaines and then at the end he said there is a new character in town that is related to one of these people here in the panel. Uhmm, makes me wonder whether he was referring to Roger Howarth being a Quartermaine. Crossing fingers.

I have watched many Paley events and yet of course… this was my favorite… because it was GH!!! Thank you for telling us about this one… Michael! It’s about time GH had one! OLTL, Y&R and Days have all had one or more in the past… along with other soaps no longer with us. The moderator, William Keck, did a great job and appeared to be a fan. What a treat… to see this and learn more about our show and cast and writers and crew!!! The questions were great and the answers/stories were such fun! Especially Jane and Tony’s… Read more »