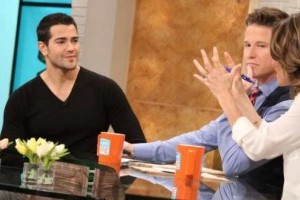 Jesse Metcalfe (Christopher Ewing) visited Access Hollywood Live to discuss the upcoming Dallas season finale next Monday night, what fans can expect when they learn who killed J.R.,  what it was like working with the late Larry Hagman (J.R.) and the question on everyone’s mind, is Victoria Principal returning as Christopher’s mother, Pam for the finale?

Right up front, Metcalfe was asked by Access Hollywood hosts Billy Bush and Kit Hoover, if Pam is back for the finale and he related, “It’s a possibility for Season 3, but, it’s not gonna happen in Season 2!”.   That may be surprising for many to hear, in light of Bush recalling seeing a woman on this weeks episode whose chin bears the resemblance to Victoria Principal’s!

As fans of the show know, Christopher got a call from a bank in Switzerland about a woman believed to be his mother, and he exited the episode on the way to see if the woman in the hat and sunglasses really is her.  “Christopher definitely explores that lead. He takes off to Zurich, Switzerland, to find out if that is in fact his mother,” Jesse said.

As to what is going to go down on the two-hour TNT finale, Jesse revealed, “A lot unfolds as part of J.R.’s master plan. It’s all kind of surrounding his murder, and part of that mystery is possibly finding my mother and getting her shares of Barnes Global so we can possibly take over that company.”

Watch Jesse’s Access Hollywood Live interview after the jump, and let us know if you think Victoria Principal is still going to make an appearance on the finale, or if you do believe Metcalfe? And who do you think killed J.R?  Let us know!

I believe in miracles!

I believe in miracles to, But I don’t want her breaking up Anne and Bobby.

I hope it is the original Pam. Victoria Principle 🙂 I love this show! Revenge is another great great show!

I made guesses b4 from a possible Kristen return to finishing him off to J.R. staging his own death(he was secretly dieing?) to just frame one of his enemies but i really dont want to know at this point. I like the suspense of not knowing, and waiting for seaon 3!

But i still hope for a Pam return no matter who plays her!

I just love this show….Would love to Pamela come back.

Come on Metcalfe, don’t go teasing us die-hard fans with promises you can’t keep. You weren’t even alive when “Dallas” premiered in 1978 so it’s unlikely you know the gravity and importance of Pamela’s presence even if you watched the DVD’s a million times over. As for Victoria Principal herself, she recently stated that she would never return to this version of “Dallas” and that her May, 1987 car crash put an exclamation mark on the end of Pamela Barnes Ewing. If Pam comes back, it will be a re-cast and sadly it will probably be an actress in her… Read more »

Joshua I agree VP was Pam and if you can’t convince her to come out of retirement then leave it alone. Here is a thought send FV/GH/EP to ask her he has a way of pulling them out of mothballs.

As Chandler would say “Can this show be any better”??? Loving Dallas!!!

Great show! Hope she comes back, but I wamt Amne with Bobby

Loving the new DALLAS and can’t wait for tonight’s season finale. Has it been officially announced that DALLAS has been renewed for season three???

Pam didn’t die many years ago from cancer. She’s not going to show up.

Would absolutely love to see Pam (VP) come back! It would serve extremely well with an Anne/Bobby twist as well as another twist with the Barnes & Ewing fued. VP was great in that role and would be difficult to see anyone else in it! Come on Victoria please come back! Though I do like Anne and Bobby together! Can you imagine Cliff turning to Pam to help him gain back control of Barnes Global…..oh the things that can be done with this story line and her return.