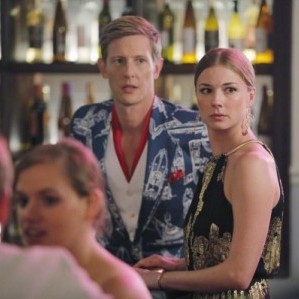 As they have promoted, “Nobody does death like Revenge!”  And tonight on the season four midseason finale of the dangerous soap in the Hamptons, somebody will meet their maker, but who?  It all starts beginning at 10PMET/9CT on ABC.

This season thus far, we have been introduced to some new characters Officer Ben (Brian Hallisay), Agent Taylor (Courtney Ford), and Louise (Elena Satine), could they be ready to exit the canvas?  Or, could it be long running characters such as Daniel (Josh Bowman), or the now treacherous Margaux (Karine Vanasse)?  Then there is Charlotte (Christa B. Allen), who has already supposedly “died” on the canvas before, so to have it be her again might just be an “Ah, O.K. then” moment.

Then there are the characters who impact are felt more widely!  Could it be the end for Jack Porter (Nick Wechsler) … or Nolan Ross (Gabriel Mann)?  It would be hard to imagine and out of the question that Victoria (Madeleine Stowe), Emily (Emily VanCamp) or David (James Tupper) would be axed because they are this season’s epicenter of the show.

We do know that ABC has teased that in tonight’s episode entitled, “Atonement”, look for Emily and dad David to team up … but who might they be targeting?  Watch a promo for tonight’s episode after the jump, which takes you through the harrowing moment last season when Emily found her beloved Aiden (Barry Sloane) murdered and other assorted deaths! Following that, a clip from tonight’s episode to get you to ponder.  Then weigh-in with your prediction! Which character will die before the show takes a  holiday break?

James Franco's "Forbidden Love" Teases His Soapy Past In This Preview For Tonight's SATURDAY NIGHT LIVE!

hmmm who will die?
It won’t be Emily .. She is the star and if she was killed Revenge would end..
Not Nolan, he is a stay til the end..
I do not know who will die, mostly who will not die ..

I hate the direction this took tonight with who they killed off. (Not saying who it was since the West Coast hasn’t seen it yet…I know this show doesn’t get many responses but just in case.) What I will say is I was completely flattened by it…sat crying my eyes out…and by killing off this character the show has lost some of its appeal for me. One of my favorite characters…not happy.

So now I can add to my thoughts above. NOOOOOOOOOOOOO!!!!!!!!!!!!!! Bring back Daniel!!!!!!!!!!!!!!! lol. Loved this guy! He was the epitome of the good guy caught up in everyone else’s evil. Yes, when we first met him he came with a “rich kid with an attitude” history…but essentially he was this good guy with dreams of becoming a writer. We learn that he wanted to do the right thing and stand up for his ex girlfriend in court. He loved Emily/Amanda in good faith and with a passion, oblivious to her duplicity. He was a great brother. All that…and he’s… Read more »

Sadly, it was not Margaux…….

Hi Shay. Thought this would be an interesting tidbit but you may know this already. Our mutual “love” Dan Stevens plays Sir Lancelot in Night at the Museum 3. He looks great! (long hair, verrry cute!) Quite the departure from Abbey but he has a comedic past in his repertoire. Ben Stiller’s hilarious so I’ll probably check the film out…

Hello, rebecca1!!! Our lamented, lost Matthew (aka, Dan Stevens….) has been featured in quite a few films since his most unwelcome departure from the “Abbey”…none of the roles has really proved to be a breakout for him like “Downton” was, but he is certainly not hurting for work. I still miss him with Mary…they were so perfect for one another, but Michelle Dockery has managed to get past his absence, so I guess we shall have to, as well!!!! By the way, the child actor they have cast as “Mini-Matthew” for Season Five (I mean, “George,”) is an absolute angel….the… Read more »

Hey Shay…still haven’t caught up with Abbey…need to contact my local PBS to find out when I can catch them. They have been doing some sort of recap show…synopsis…which I haven’t watched because it will ruin it for me. Haven’t seen Stevens in anything since but I will try to catch this…either in the theatre or when it come to InDemand. Probably very funny and as said he looks too fine, lol, in his long hair. Have to catch up with “Forever” too. Looks like it’ll be a binge weekend if its a rain day! Sigh…I really will miss Daniel… Read more »

Makes perfect sense, rebecca1!!!!….I totally miss AJ and have seen SK as B&B’s Deacon one or twice since his departure from GH, but it truly is not the same. The characters are SO different that there is simply no comparison….I myself tend to enjoy the more upper class, aristo types of roles, so watching Sean play a bottom-feeding snake provides no enjoyment for me, despite the fact he does it VERY well!!! I feel the same about Dan Stevens…..of course, I wish him the best of luck in future endeavors, but for me he was Matthew, and that is really… Read more »

I knew too..
James Tupper wanted to leave Revenge but he stayed on for another season, so ya it had to be Danial ..
We see him again at sometime on some show.. hey! maybe with Kelly/Britt lol

James Tupper is the actor who plays David. Josh Bowman played Daniel…and he clarified that the article stating he wanted to leave was not correct.

Kelly would fit nicely into Revenge! Not sure in what capacity but I could see her on that show…wouldn’t mind seeing Josh on GH!