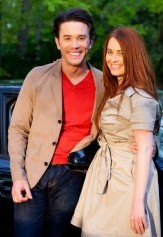 So what happens when a charming, suicidal druggie must obey his rehab-clinic’s demand to lead a seniors men’s group or face incarceration and lose the love of his psychiatrist’s daughter?  That is the promise of the  romantic comedy… in recovery, Excuse Me For Living,  featuring many of your favorite stars of daytime television!  Heading the list in the leading role is  Two-time Daytime Emmy winner, Tom Pelphrey (Ex-Jonathan, GL) and his romantic co-star One Life to Live’s Melissa Archer (Ex-Natalie, OLTL)!

In addition to Pelphrey and Archer, One Life to Live’s David Gregory(Ex-Ford) and Tonja Walker (Ex-Alex) also appear, as well as As the World Turns Ewa Da Cruz  (Ex-Vienna)!   The film will premiere tonight in selected cities in theatres in the U.S!  So if you are living or in proximity to the following cities:  Encino, Long Island, New York City, San Diego, San Francisco, Scottsdale, Charlotte, Dallas, Denver, Houston, Seattle or Tampa, check out Excuse Me For Living Tonight. Click here for more information on selected theatres and times of the screening!

Watch the trailer for Excuse Me For Living after the jump (we have posted it once before) to get you in the mood to turn out and support the work of some wonderful performers that we miss from our daytime television screens!

Jerry Douglas Set For A Return To The Young and the Restless!

This looks good! I love Tom Phelprey and I liked Melissa on OLTL. I hope to see this movie. Tom should be a big star like a lot of the Guiding Light alumns like Hayden P. and Matthew Bomer.

Oh and Blake I agree with you comment about Tom being a big star, but you also forgot one of the biggest stars from GL Kevin Bacon.

This looks really good! Can’t wait to see it. Love Melissa Archer and she has a wonderful sense of humor. Remember that we saw some of it with her & Michael Easton on OLTL. Hope she heads to GH now and gets her man back!!!!!

Looks like a fun movie!
I really like cast too with the exception of Melissa Archer , the movie would be much better for me with her absence..
I’ll check it out ‘on demand’ ..

if you can’t say something nice, don’t say it at all 🙂 Melissa rocked this movie.

agreed ! evveryone should remember what Thumper’s mother told him.

Yes Melissa Archer sure did!! She and Tom were my favorite parts of the movie.

Saw the movie and it was so much fun and boy did Melissa Archer rock it!! Whew! If you thought she was gorgeous before you should see her in this movie. Such a great actress and Tom too, whoever had the idea to put my two favorite soap actors together was a genious. These two are going to be big!