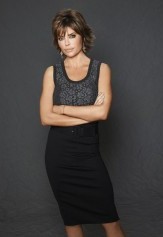 Lisa Rinna who announced her plans to depart Days of our Lives some time ago, even though she just returned this past March, already has lined up her first gig post-Salem!  Turns out Rinna will be appearing on the Donal Trump celebrity reality competition series, Celebrity Apprentice.  But like this season’s Dancing with the Stars, this latest edition of Celebrity Apprentice will feature past contestants in the All-Stars version.

Rinna is confirmed to return to the boardroom series, along with the other members of the All-Star cast revealed on The Today Show including:  Bret Michaels, Gary Busey, Dennis Rodman, Marilu Henner, La Toya Jackson, Dee Snyder, Omarosa, Penn Jillette, Stephen Baldwin, Lil Jon, Trace Adkins, Brande Roderick, and Claudia Jordan.  Past winners: Piers Morgan, Joan Rivers, John Rich and Arsenio Hall will be appearing in advisory roles assisting Trump in the boardroom!   Filming for the All-Stars edition begins next week and will premiere in March of next year!

Meanwhile, Rinna tweeted about her final tape day on Tuesday at DAYS stating  “It was my last day on Days of Our Lives – tomorrow I start a new gig. Off we go!”  Rinna is expected to be seen on screen as Billie Reed through mid-January!

I do like the Billie character just not Lisa Rinna playing her.
Sorry, but I don’t believe she is that good of an actress!
Krista Allen was the best that played Billie

When I watched DOOL and she came on Robert Kelker Kelly was playing the role of Bo and she had good chemistry with him not so much with Peter Reckell I think it is another one of those deals where they bring an actress back and sometimes they just don’t click anymore.

I love Lisa as Billie…missed most of the faux-Billie’s who came along after but what I did see, none the the other Billie’s had the natural “Lisa Rinna spark.” Like everyone else who returned over the past year, she too was embarrassingly under-utilized. She would’ve been great paired with Jack as a confidant during his troubles with PTSD/Jennifer woes.

LR is leaving? Was she ever there? Her character was in like a handful of scenes since she has come back that I sincerely doubt most people would even notice she is gone.

I now prefer Julie Pinson as Billie.. I liked Lisa more way back in the day. I thought she played Billie so much better then. Her latest return was a big disappointment.

They did not use Lisa Rinna much at all and I don’t see any development in her individual storyline at either. I think they were all concentrating on bringing Eileen Davidson back and giving her a fantastic front-burner storyline instead. Perhaps bringing in Julie Pinson as “Billie” again would have made the difference. Actually, I don’t think it was necessary to bring the character of “Billie” back at all.

They should’ve paired her with Dan instead of having Dicole, but now she is useless

The return was a big disappointment because the writers didn’t give her a story. I was glad to see her back, but Billie didn’t do anything. They totally dropped the story of having Billie spying on the DiMeras and then when Kate lost Countess W, where was Billie to go? Days totally fumbled her return so not surprised she’s gone. Look forward to seeing her on CA. Hope she does well. Glad Star Jones didn’t return.