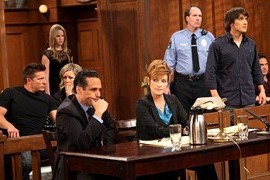 What a week it was to honor the best and brightest on daytime on the web.  Earlier in the week the On-Air On-Soaps Podcast presented it’s latest edition, which doled out the top thirteen categories in the TV Guide Canada Soap Opera Spirit Awards.  And yesterday, TV Guide Canada posted the entire list of winners here.

During the podcast presentation on hand for the ceremonies were Suds Report’s Nelson Branco, and a star-studded list of call-in guest who delivered their acceptances speeches and entertaining interviews including: Venice’s Crystal Chappell, whose stellar web soap won Outstanding Soap Opera, and she for Outstanding Head Writer, Y&R’s Michael Muhney who took home the Lead Actor prize, GH’s Lexi Ainsworth who was awarded the Younger Actress Award, ATWT’s Eric Sheffer-Stevens and Y&R’s Tricia Cast, who took home the Actor and Actress in a Recurring or Guest Star Role kudos, respectively.

As well, MIA Daytime Emmy contender, One Life to Live’s, Florencia Lozano won for her performance as Tea in the Outstanding Lead Actress Category. Venice also nabbed some more honors for Hillary B. Smith and Nadia Bjorlin winning for Outstanding Supporting Actress and Outstanding Female Actor in a New Role or Recast.

Make sure to check out the complete list of SOS Award winners at TV Guide Canada, and listen down to the podcast co-hosted by Nadia Bjorlin, Carolyn Hennesy, and On-Air On-Soaps, Michael Fairman.

"The Bay" shooting Spin-off Prequel to debut this summer!