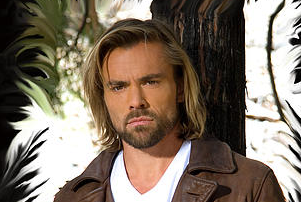 As the highly-anticipated online series Winterthorne is set to have its online debut this Thursday, August 27th, over the next few days leading up to it,  On-Air On-Soaps will be bringing you some red carpet video interviews with the cast taped at the Winterthorne premiere and screening held just over a week ago.

John-Paul Lavoisier is having quite the resurgence in his soap opera career! Beloved for his portrayal of Rex Balsom for almost a decade on One Life to Live, his fans have been clamoring to see him on their daytime screens again, and now they will have the opportunity to do so – in two different shows and formats!  Up first, John-Paul makes his debut in Winterthorne in the role of Hugh Cambridge, and that is followed by his contract role on Days of our Lives as the new Phillip Kiriakis!

When discussing with Lavoisier the exciting casting news that he is the new Phillip Kiriakis of Salem, and what it feels like to be part of that iconic clan, JP Responded:  “You know, it’s funny.  On One Life I started out as sort of a kid and grew up.  Now being a Kiriakis and being at DAYS, I feel like an official grown-up.  I wear suits every single day and I am corporate.  Working with John Aniston (Victor), I’m like this business man.  I’m doing man stuff, posing in my suit! (Laughs)  I’ve got like computers and paperwork and talking about Taiwan negotiations and all kinds of stuff.   So, it’s different.  One of my favorite movies of all-time is Glengarry Glen Ross, and it’s finally come to use.  I get to use that knowledge and demeanor and bring that to this project, and so it’s good.”

As to what to look forward to in those outdoorsy scenes that feature Lavoisier’s character of Hugh and Martha Madison’s Miranda Winterthorne in the Winterthorne promos,  JP teased: “I probably shouldn’t say why because it will ruin it, but these are my Winterthorne scars! (shows hand).  I just legitimately got this on set and you will see why.  I absolutely had fun being in Winterthorne, because for me I got the chance to be in the woods in real life.  It feels really real.  It felt like I was on vacation, instead of being in a studio.”

Watch the video interview with John-Paul after the jump.  Then let us know if are you excited to see him as Hugh in Winterthorne and as the new Phillip on DAYS?  Share your thoughts in the comment section below.

(Rex was Clint’s son via that no good Echo DiSavoy.) You are so right. JP and Melissa worked so well together on OLTL. It would have been great to reunite them. Too bad TPTB didn’t think of that.

JPL & MA had great chemistry on OLTL. Loved them with Roxy.

I like JP & glad he’s on Days… but personally will miss JKJ as Phillip. I’m now waiting to see if they recast Stephanie w/ Patch back.

I hope they write the character in such a way that does not detract from JPL ‘s natural charisma and comic abilities. We have already seen Chad go from being a laid back fun loving kid, to a buttoned up, intense, suit wearing mogul. The thing about JKJ’s first stint as teenage Phillip, and why it worked so well, was that he was NOTHING like his parents, and had a very easy going vibe. His return several years ago fell majorly flat because the writers had no idea who Phillip was, or who they wanted him to be, and the… Read more »

I would prefer to see Jay Kenneth Johnson in the role of Phillip. Not excited about this casting of Phillip. But wish JPL well.

Word to the wise: If you really don’t want to know the truth about how viewers feel about actors being cast in a particular role, then don’t ask the question. The truth may not be what the actor wants to hear. Not every viewer is excited about every actor. I saw JPL in the soap reality show that was on a few years ago. (It also featured Galen Gering, Nadia Bjorlin, et. al.) JPL shared his love of New York City and disdain for LA. So wondering how long this participation on Days will last. He may leave the role… Read more »

Thank goodness we don’t have to rely on you for casting the show..Lord knows who’d end up playing who. But at least you’d be excited about it…LOL

The question I answered was, “Are you excited about JPL being cast as Philip on Days?” My answer was and is, NO! I was not asked to cast the role. If I had been asked, my first choice would have been Jay Kenneth Johnson, the actor who originated the character of Philip. With Days bringing back actors who originated characters on the show, I find it odd that the “original Philip” was not asked to reprise the role. I could understand if Jay was not available that the show would look for another actor. Usually in that case they make… Read more »

Can’t wait to se both shows ,he is so talented and we wish him good luck .

Thanks for the interview. Welcome to DOOL JPL! I know you’ll fit right in.

Great interview Michael. Haven’t seen the character in a while. Will be interesting to see how he figures into the upcoming 50th celebration!!