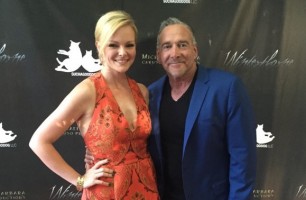 As the highly-anticipated online series Winterthorne is set to have its online debut this Thursday, August 27th, over the next few days leading up to it,  On-Air On-Soaps will be bringing you some red carpet video interviews with the cast taped at the Winterthorne premiere and screening held just over a week ago!

First up is the series lead and star Martha Madison, who plays the central figure Miranda Winterthorne.  Throughout the episodes, you will get the opportunity to see Madison like you have never seen her before!

During our red carpet chitchat on her role in Winterthorne and what viewers can expect, Madison revealed: “It’s a really multi-layered character.  You are going to see a critical ten-year span of Miranda’s life through this show.  You get to see so many different Miranda’s and as an actor, that is a dream come true.  I’m sort of playing these ten different characters, and the climax of that is sort of this incredibly powerful strong woman who has figured out how to maintain control of her empire! Who wouldn’t want to play that?  The candy company provides a very colorful backdrop to the story.  But it’s not about candy.  It’s about power struggle within a family and within a business.  And it’s a world where the women rule the world.”

As for her return as Belle on Days of our Lives come this November, Martha shared her enthusiasm: “I am really excited about that.  I have been away from DAYS for seven years.  So it’s been totally cool, and weird, and awesome to be back.  Again, Belle has really changed.  She has grown into a very mature woman and completely in control of her life … ish!” (Laughs)

Watch Martha’s video interview from the Winterthorne premiere after the jump! Then let us know if you will be checking out the series debut this Thursday, and if you are looking forward to Martha’s return as Belle on DAYS!

Y&R's Justin Hartley Chats On Playing The Black Sheep Of The Newman Clan!

Hope the stories match the excitement of the returns: Off topic…where is Shay, Timmm, CeeCee, James, Jaybird, and Rebecca…havent read their comments in some time???

So looking forward to Martha’s return as #Belle. Love her & Belle. Loved Kirsten back in the day as well, but Martha is more mature to play Belle as a mom to Claire. Super excited to see her in Winterthorne! Yay!!!

August 27th is the big day. I’ll be watching Winterthorne! And I’ll be waiting with anticipation for Martha’s return as Belle on DAYS in three months!!