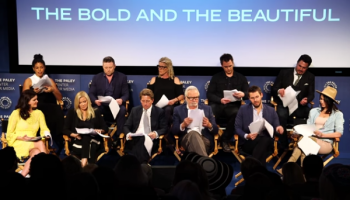 On November 3rd, cast members of The Bold and the Beautiful along with executive producer and head writer, Brad Bell took part in a panel celebrating the series as part of the CBS Daytime 30 years at #1 exhibit at the Paley Center for Media in Beverly Hills, California.

B&B was created by the late Bill Bell and his wife Lee Phillip Bell, and debuted in March of 1987.  Lee was in attendance as well and received a standing ovation from those associated with the series and the audience.

The Daytime Emmy Award winning-series continues to be the most watched show around the world.

After the jump, watch the script reading which has just been made available by CBS Daytime for the first time, and the spontaneous and hilarious moments that ensued between the cast.  Then let us know what was your favorite moment from it in the comment section below!

B&B Releases New Music CD Of Songs From The Show!

I enjoyed this. Having been a Capitol fan I stay tuned in for B&B and have been along for the ride ever since. And I was surprised in a good way this week – the episodes seem to be moving multiple stories forward without heavily concentrating on just one. Liking it!

I love The Bold and the Beautiful! My favorite soap by far. Thank-you guys for all the hard work and hours you put in. Love each of you! !

Not a B&B fan but loved this so, so much!

Where is Thorsten Kaye isn’t he a major player?

Loved it…It was so neat to see all these actors/actresses take part in this along with Brad Bell…Loving the show at the time…Brad, if you read this, I actually sent a letter to you asking you to hired Jaime Lyn Bauer to be with John McCook…Yes, I am enjoying the Eric/Quinn story line but maybe JLB can come on in at a later time to shake things up. Maybe she will be back on Y&R one of these days since Sally and Kay are back.

I miss the old characters from 4 years ago. The show is not as good as was then when Stephane., Eric, original Ridge, Thorn, Taylor, Brooke, Donna, Marcus, Dayzee, Thomas (Adam Gregory), Steffy, Hope, Liam, Amber, and other recurring characters made it more of a show about family. Grant it, I haven’t watch the show consistently in a while. When I do watch it I can’t even watch the entire show. Too many unhappy people. I always hated the way they broke up Thomas and Dayzee. To me theyvcould have been a powerful couple that could have added some stability… Read more »

I still watch, but like you said, its not the same. I forgot all about the pairing of Thomas and Dayzee. Thomas is still around. He and young Caroline are the proud parents of a baby boy named Douglas, (in honor of Stephanie). Caroline was married briefly to Ridge until it was found out that Thomas and not Ridge was the father of Douglas. Although they are not a couple, Thomas and Caroline are now co-parenting baby Douglas. I loved Marcus and Dayzee as a couple. If I am remembering correctly, Marcus is Donna’s son with Bill Spencer’s lawyer. I… Read more »

Why hasn’t Stephy realized that she is getting 2nds after Liam was with the witch that she hates so much. Does Stephy think about Liam and her mother-in law in the bed to- gether? that would make a good story line!