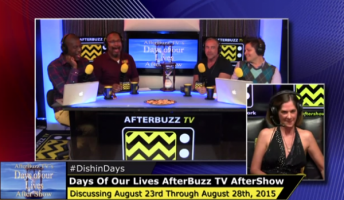 On Sunday night, Days of our Lives star Kassie DePaiva (Eve Donovan) and On-Air On-Soaps Michael Fairman were the special guests on the latest edition of the Days of our Lives weekly recap series, Dishin DAYS on AfterBuzz TV.

Kassie and Michael joined hosts: Tony Moore, James Lott Jr., and Mark J. Freeman for an hour-plus romp on the shenanigans and on-goings in the town of Salem for the week of August 24th through August 28th.

Storylines discussed included: Aiden/Rafe/Hope, Chad/Ben/Abigail, Jen/Eve/JJ/Paige/Kyle, plus the new writing regime of Josh Griffith and Dena Higley, and the changes already seen on-screen during the first 8 episodes under their tenure, and more.

Time was also spent on dishing: Caroline’s nightmare about Bo and the upcoming return of Peter Reckell, who the panel thought was going to be the second murder victim revealed next week on September 9th, what will happen when Patch and Kayla’s awkward reunion plays itself out, and much more.

Watch the replay of the latest edition of Dishin DAYS with Kassie and Michael after the jump! Then weigh-in on the current stories as discussed by the group on the show! And, who you think will be the next murder victim after watching the broadcast?  Do you agree with our pick?  Comment below!

It’s all across the internet that the next killing is Tuesday, September 8th!

Thank you so much for posting this show. It was so much fun. I loved it. Michael: Thank you for your comments concerning One Life to Live. I watched the old CBS soaps with my mother when I was a child. When OLTL came along, it touched something in me from the very first episode. I remained a loyal viewer throughout the network run and the online version. The characters were wonderful and the actors were outstanding. No matter what was given to them, they gave it their all. I will never get over the loss of this wonderful program.

I like Kassie DePavia in the role of Eve. One of my concerns about the murders in Salem was that Eve would be killed off. I don’t believe she will be and I am so glad for that! I don’t like the idea of Aiden being a bad guy. I hope he is just working to put the finger on Clyde. Giving him the benefit of the doubt regarding the money he anticipates getting. Also think Days should be careful with the character of Aiden. Don’t know if Peter Reckell is committed to the show. If Peter is not, Hope… Read more »

Enjoying the discussion by the panel. Just wish they wouldn’t talk over each other. Want to hear what everyone has to say.

I enjoyed the Chad-Serena scenes. Should have made them a couple and not have killed Serena! Chloe would have been a good murder victim in the exact same scenes as Serena-getting drunk in Club TBD and turning up dead in the bushes. The story would have worked just as well, and we wouldn’t have to be bothered with Chloe again!

I enjoy Brady’s attitude towards Theresa. She deserves it. She has not changed. She brought this on herself. The best part about the character of Theresa is her relationship with Eve. That relationship makes her tolerable! Otherwise she may as well be a murder victim!

Hi, Gmbenet. I don’t know….I feel differently. I love Theresa. She is one of the best characters on the soap. She is multi-dimensional and plays the catty, bad girl to the hilt. Brady is a sanctimonious brat with a chip on his shoulder who does not know which way is up. I do not buy his self-proclaimed lord of morality. He should be a little more accepting and forgiving considering the fact that he used and abused Theresa as much as she did him. They went through an ordeal together. Who died and crowned him a martyr? The debacle with… Read more »

The one thing I do agree with you on is that Jen Lilley is a wonderful actress who plays the bad girl well. The problem with that for me is that the writers have shown far too little of her that affords liking. So far the only thing to like about her is her relationship with Eve. If a character is ALL bad like Xander and there is nothing there to like it soon wears on you. There is no reason to want to have the character around. Relative to Brady, there is nothing to sympathize with Theresa for. Except… Read more »

I imagine Theresa will survive an attack by the strangler which will change her attitude.

If Paige is the next murder victim, I feel very sorry for Eve! JJ will have a hard time getting over it! That will be rough!

I so hope Paige isn’t the next victim. I can’t imagine she will be because the set up looks like Chad is supposed to be the number one suspect. Chad has nothing to do with Paige. I think Ben will be next. I’m not happy about that. I like the Ben character and think he could have a long term future with the show if he gets away from his snake father, Clyde.

I’m thinking Paige will eventually die because of her association with the drug dealer.

I think Ben may be the killer! His motive is for get rid of Chad by framing him. Days has admitted that there are twists and turns to this story. I think the character of Ben has been revised to make him a bad guy and the wrong guy for Abigail. So I think he will end up being the serial killer! Such a waste of space good character!