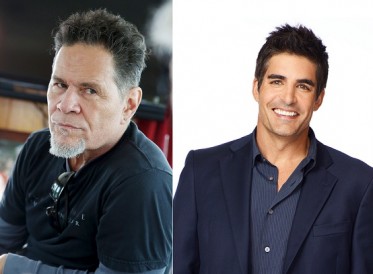 On Tuesday night, On-Air On-Soaps Michael Fairman hosted the latest DAYS Hangout with very special guests: A Martinez, who will soon be arriving in Salem in the new role of Eduardo, the father of the Hernandez clan, and his  on-screen son, Galen Gering (Rafe).

The other member of the Hernandez family, Camila Banus, (Gabi), who was scheduled to be a part of the live event unfortunately had fallen under the weather shortly before broadcast time, and was unable to participate.  We will reschedule another DAYS Hangout with her in the near future, since she is set to return on-screen on the September 17th episode of the NBC sudser.

Joining A, Galen, and Michael for the live hangout were DAYS fans from literally around the globe, and across the United States who had the opportunity to pose some questions to the actors including:  Ian Charles Stewart from Auckland, New Zealand, Carolyn Topol from Connecticut, Dottie Di Liddo and Noell Reed Jr. from Virginia, James Ruff from Alabama, and Lisa Nelsen Kemper from California.

The DAYS Hangout marked the first time A Martinez had spoken publicly about his new role as Eduardo.  Daytime fans remember him most for for his Daytime Emmy-winning as iconic role as Cruz Castillo on Santa Barbara.  Below are a just a few of the teases and intriguing tidbits offered up by the Days of our Lives stars during the live broadcast.

When discussing how he was contacted about the role on DAYS, A related:  “Josh Griffith (co head-writer DAYS), because he worked on Santa Barbara, I think imagined me in this role and so he called.  When someone calls you and you know their work as a writer, and you respect them it’s easy to say, “Yes”.  Josh told me about the role: ‘Trust me this is in your wheelhouse.”’

Galen Gering revealed there is some major conflict ahead with the arrival of Eduardo on the scene:  “Between the three of us our characters have distinctly different memories of our childhood and a different point of view coming in.  So what she (Gabi) wants, what I (Rafe) want, and what he (Eduardo) wants are not necessarily meshing, and that makes for good storytelling.”

When asked who their love interests will be on the show, especially since it appears Rafe has a major crush on Hope (Kristian Alfonso), but there are clearly two other men in his way right now, Hope’s relationship with Aiden (Daniel Cosgrove), and the impending return of Bo (Peter Reckell), Gering teased about some other women in Rafe’s orbit in Salem: “There is a potential for some ‘suitresses”‘ (Laughs).  A added:  “My character has been involved in some character lives in a very provocative level.”

As for what other cast members he has had a chance to work with, Martinez hinted with: “I’ve been friends with Drake Hogestyn (John) for 35 years, and now I am able to do scenes with him, and am involved in a storyline that he has been invested in most of the time he has been here, and it’s pretty cool.  I’ve has some great scenes with Kassie DePaiva (Eve) and Lauren Koslow (Kate), too.”

A also shared this about Eduardo’s character disposition:  “I like the fact that he has a good deal of mystery to him.  He is extremely wounded and has built a psychology that is really complicated, and not particularly well-founded.  So I think there is tremendous flexibility inside the character to play all kinds of things. It’s almost like within the same show, it’s like putting a mask off and putting another mask on. ”

Below checkout the  video replay of the DAYS Hangout with A Martinez and Galen Gering! Let us know … what was your favorite moment in it?  What did you think about the bits of information teased for what’s to come with Eduardo and Rafe and the Hernandez family?  Comment below!

TODAY: Finola Hughes Returns To General Hospital! What Do You Hope Is In Store For Anna Devane?

I am elated that A Martinez will be having scenes with my all time favorite actor, Drake Hogestyn! I hope so much that this means the new writers are opening up John’s past! I would love for it to come out that John and Eduardo are brothers, which makes John Rafe’s uncle!

1. he just takes my breath away…. Galen Gering – “Rafe’alicious”

Sounds promising especially the bit about A being involved in a long standing John story. This should be mysterious and adventurous.

I agree, Allen. This will be interesting, compounded with the fact that I love Martinez…he truly is one of a kind.
What is really nagging my brain is the fact that we saw Bo’s sprawled body on some cold floor/ground, obviously hurt…..and, no one is very talking about THAT !!!!
Furthermore, John Black really gets to me, in a bad way. Those facial expressions remind me of Jughead, the cartoon. ..I do not like this character. I know I have committed a mortal sin and I shall be excommunicated. I also know he’s a fan fave….please don’t hate me….LOL

Correction….meant to simply write…no one is even talking about THAT. Sorry.

Well you just did! I love that Bo has been kidnapped and being held in captivity!!! I’m sure these stories will all tie in at some point. A Martinez is a legend and i expect him to bring alot to the table. John is beloved but he has had a few moments that were less than stellar so….

So much awesome talent on DAYS from its storied past and the daytime genre in general. Wow! I pray there are strong and compelling plot lines and this is not all just a series of anniversary stunt castings.

Galen, knocks it out of the park! We fans love you is much more important!! Thank you Michael I love your interviews!