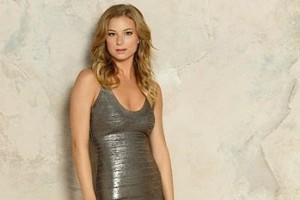 Revenge premiered its third season on Sunday night, and there was plenty of action that happened off-camera as there was on-camera for the characters in this re-anchored ABC primetime drama series.

Here is what was revealed in-story:  Charlotte (Christa B. Allen)  lost her and Declan’s baby, and  it was never stated how, but it was clarified in a new interview with TV Line by showrunner Sunil Nayar that it was from a miscarriage.

Elsewhere, Jack (Nick Wechsler) had gone away out of town for months after the revelation that Emily (Emily VanCamp) was the real Amanda Clarke.  After Amanda learns Jack just got back to town, she goes and visits him at his bar.  While there, Jack admits he understands her motive to get back at the people that took away her father, because of his own relationship with his young son  When the two goes in for a kiss, Jack eventually pushes Amanda away and tells her she has till end of the summer to seek her revenge on the Graysons, and then get out of town, or, he will blow the whistle on who she really is, and he wants nothing more to do with her.

As for Conrad (Henry Czerny)passing out during his speech, and his diagnosis of Huntington’s Disease which forced him to resign as governor, we learn the whole thing was set up by Emily (AKA Amanda)!   She drugged Conrad!  Sunil Nayar also told TV Line about this story decision, “Part of it was we didn’t want to trap Conrad in Albany all season. But we also wanted to set up a storyline where we see how wonderful Emily is at her takedowns. He didn’t just get taken out of the governorship — he believes he has [Huntington’s] disease. This was a bit of a nod to the pilot where she did the same thing to Conrad, but we took it a step further and made sure it had psychological and physical ramifications that will cause him to examine who he is and who he wants to be. So, in tandem with bringing him back to the Hamptons, where we certainly wanted him, we wanted to make sure that we embarked on a storyline that allowed us to get to know this man a little better that we have.”

Justin Hartley’s debuted as Patrick.  After arriving at the Hamptons after spending several months hanging out with his mother, Victoria (Madeleine Stowe), Charlotte threatens him.   Next thing you know, Patrick is packing his bags and says goodbye to his mother again.  Victoria is clearly upset!  But clearly he is coming back.   But what is the real story there?

Ashley Madekwe (Ashley)exit was precipitated by first a blackmail attempt on Emily, only Emily turned the tables on her and “teamed” up with Victoria, and they had Ashley board a plane and get out of dodge!

Finally, at the end of the episode it was Barry Sloane as Aiden who showed up on Victoria Grayson’s doorstep willing and able to work with her to bring down Emily! Now, as to if Aiden’s true intentions are to double cross Victoria to help Emily, Sunil Nayar told TV Line:  “He will state at the beginning of Episode 2 exactly what his opinions are about Emily, and you will see what he’s planning to do.”

So when you look at all that happened on last’s night episode, and the fact that the opening scene was Emily getting shot in her wedding dress, already several leading candidates come to mind who might want her dead!

What did you think of the season premiere of Revenge? Any early favorites on who you think shot Emily? Was there any moment that shocked you in the episode? Weigh-in!

Corbin Bleu Blog's On Tonight's DWTS … Dancing The Quickstep is No Easy Task!

The Stafford Project Episode 5! Michelle Trys To Figure Out … What Does It Mean When A Guy Texts You Colored Hearts?

It was bland and boring except for one particular scene; SHIRTLESS PATRICK! Hopefully the next epi will bring some excitement, if not, I’m done.

Well done as usual!! I love the way they set up the plotlines on this show and make it so you can’t wait for the next episode!!

Hoping Emily being shot doesn’t mean the demise of Emily Van Camp from the series. She is the essential ingredient in the Revenge!

Loved it! Felt more like season 1 than season 2! It was good!

It certainly set some things in motion for season three. Can’t wait to see what unfolds!

Was a promising start to getting back to the true heart of “Revenge” ala Season One….LOVED Nolan….glad to see Mr. Ross once again consorting as chief in cahoots with Ems, they are THE team, aren’t they? Also enjoyed Victoria and her boy, “Patrick,”….that’s going to be some pair, something tells me….as in the apple didn’t fall far from the tree! As for his so far yet clueless sister, Charlotte, about the only thing to be said is that those “Bangs From Hell” really suit her!!! Definitely a step up in her style stakes! Other than those few takeaway observations, not… Read more »

I am pleased. Seems last season’s road did set up problems that would have derailed REVENGE, i.e. Governor Conrad in Albany. The drama that closed season 2 seemed to rattle everyone enough to allow some new beginnings and refresh neglected relationships and tones. Hooray for the end of The Initiative and Carrion. Those espionage plot devices were confusing and took away from the humanity and relationships of REVENGE. I know ratings were down fro the season premiere and I hop REVENGErs who tuned out late last season will return. Things are looking up in the Hamptons!

Still confusing and entirely too rushed in the plot development. I can’t get over how Charlotte didn’t bat an eye when Patrick told her that he’s her brother.

It was different… but good. Love that Emily/Amanda is still so close to Nolan and I hope that will not change. Based on what she said when being shot it could be him…truly hope not!!! I think who shot her is either Daniel or Aiden. Looks to be a great seaon… truly glad the initiative looks to be gone. Her revenge against the Graysons should be enough to carry the season. Please let Nolan be by her side the whole season and not turn on her.