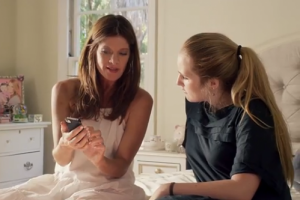 In the latest installment of the hit web series, The Stafford Project, the character of “Michelle” (Michelle Stafford) receives a text from a guy she has been dating on occasion.   The text contains a series of colored hearts in rows.

After receiving the text, Michelle is told by her friend Paige,”That’s weird”.   Then, Michelle starts to ask different people what they interpret the hearts to mean, where Michelle believes it is a very romantic overture from a real man.

As she questions people about the significance and meaning of the text, this only become more hilarious! But the topper, and the scene that was the funniest to us, was when Michelle asked the 17-year-old babysitter who was watching her daughter what she thinks the Pink and Blue hearts mean.   It’s priceless!

What we loved about this episode, in a series that has been exceptional thus far, is that it was all Michelle Stafford who is so adept finding the ridiculousness of life and making it very human and funny on-screen.

Watch The Stafford Project episode #5 below, appropriately titled, “It’s Just a Heart”.   Then, let us know what you thought of it in the comment section below!

READ MORE
FRIDAY ON Y&R: Paul and Christine's Honeymoon Circa 1996
Related Topics:Michelle StaffordStafford ProjectThe Young and the Restless
Up Next

What Did You Think Of The Season Three Premiere Of REVENGE?

GENERAL HOSPITAL: Luke He Comes Face To Face With Helena … Or So He Thinks!

I’m glad I can see Michelle on the internet…
I miss her on Y&R,,
Y&R has become lackluster, a big yawn, and now even more so without Phyllis/Michelle ..

Very cute!!! She is very comedically talented. Miss seeing her on Y&R!

Loved it…Michele is a riot. Great comedic timing and love her facial expression. How funny was the hanuman with his analysis on the situation. He had it spot on with Michele she is one fine lady. I can’t wait for the next episode. HBO give this lady a series.

just watched all 5 episodes….LOVE IT!!! you are awesome Michelle….miss you on Y&R