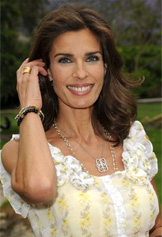 Days of our Lives stars Kristian Alfonso and James Scott will be appearing on this Thursday’s Macy Thanksgiving Day Parade in New York City.   Make sure to catch the Salemites on NBC Turkey Day morning.

Now what about your soap viewing habits during the holiday?  On-Air On-Soaps has got you covered there.  Here is a rundown:

Over at ABC Daytime. All My Children, One Life to Live and General Hospital will be airing encore episodes Thanksgiving Day to include: Amanda and Liza giving birth, Blair falling out a window, and James Franco’s GH debut.

On CBS Daytime both As the World Turns and The Bold and the Beautiful are pre-empted Thurday and Friday, but The Young and the Restless will air encore episodes both days.

And at the peacock network, NBC, Days of our Lives is pre-empted on Thursday, but a brand new episode will air on Friday.

Hope you and yours have a wonderful holiday from On-Air On-Soaps!