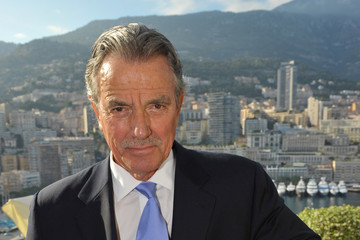 To say that The Young and the Restless, Eric Braeden is one busy man is an understatement.  While continuing to film his role as Victor Newman on the CBS sudser, he has also been busy promoting his new memoir, “I’ll Be Damned”, which was released in February.

Now comes word from Braeden himself that he is off to Atlanta filming a role in his son, Christian Gudegast’s new motion picture.

In a series of tweets on Saturday, Eric related: “Am on way to ATLANTA to be in my son’s film called Den of Thieves, starring Gerard Butler, 50 cent, O’Shea Jackson, etc!  My son will direct!”  He went on to clarify his role in the film will be a cameo, answering a fan via Twitter: “As I said, just a cameo!”

While in Atlanta, Braeden will also have a book signing on Wednesday.  He let his fans in the area know via a tweet that said: “Wednesday March 8, from 7-9pm, at BARNES&NOBLE inALPHARETTA, GA! Hope to see you there! Have a nice day, everyone!”

So, intrigued at Braeden and son’s new film Den of Thieves? Comment below!

He is a busy man and seems he is enjoying himself. Good for him!

Victor your a very fine actor .and I happened to marry a man who looks just like you .wow love you dearly .please come to St John’s Newfoundland Canada .we are big fans of the y r.lol isabel

You Eric are a beloved actor and man that I have followed since your tenure on Y&R. Continue to do what you love and your fans will continue to follow you on your adventures.

what is den o thieves

I am assuming that due to its title, Den Of Thieves is a movie/ euphemism for bad guys/ people, james.
The term is equivalent to ” a snake pit”, “lion’s lair”…etc.
It is so evident what a good dad Eric is…true family man involved in his son’s endevors.

Funny. The current filming location of “Den of Thieves” is roughly a 5-minute drive from my house. I knew that Gerard Butler was the star and Braeden’s son was the director. I’d actually thought about going by to see if, from a distance, I could actually see anything being filmed (but haven’t done so, yet). I wonder if the scenes with Braeden will be filmed in this same location (the building is an old, bus station that presently is “dressed” up to look like a donut shop)?? I wouldn’t mind chatting with Braeden. I would never impose on him but… Read more »

What a lovely surprise to see Victor Newman in a very small cameo at the end of Den of Thieves…I googled to discover why!