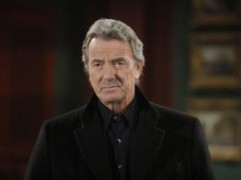 The Young and the Restless’, mustache, Victor Newman is at it again, getting payback and stirring up problems for most of Genoa City! First after Diane tried to destroy her hubby he discarded the gal by throwing her out of an ambulance where she landed bruised and battered on the street! Now comes word he is about to set up his nemesis Billy Abbott, who Victor clearly loathes, by getting a Genoa City Hooker involved in his plot!

But it is the man behind Victor Newman, who makes him one of soaps’ all-time most memorable and legendary characters, and we are speaking of Eric Braeden.  The daytime veteran spoke with TV Guide to address ambulance throwing, his thoughts on the recent Daytime Emmy and its voting system, and playing the bad guy!  Here are a few excerpts!

Braeden on fan pushback after his alter-ego threw Diane out of an ambulance: “I completely understand how viewers would be upset by [the ambulance scene] and under no circumstances would I personally condone any kind of physical violence against women. My, God, no! I would never allow that. But Victor just doesn’t give a s–t. And he doesn’t take any s–t. That is the whole point of the character. He’s the villain! He’s defensive and always self-protective. He’s not here to win a popularity contest.”

Braeden on why he was not at the Daytime Emmys last month in Las Vegas: “Under no circumstances would I have been there. I think it’s a joke. It’s a farce. And it has been that way for a lot of years. They make it more ridiculous every year. I don’t watch it because they [pre-]nominate from within each show now — some genius came up with that nonsense a few years ago — and it has turned the system into a popularity contest. I’m very glad Heather Tom won. And Bradley Bell. They are decent people in this business. And, of course, Maria Bell, who has done a very good job. But I don’t think about the Emmys. You are the one who brought it up. I just ignore it and so do two or three other people at Y&R.”

Braeden on how certain men are portrayed on television as a whole: “I am appalled at the image of so many of the men in daytime and prime time — from dramas and sitcoms to commercials — who are asked to play the schmuck. How many times do we see the father berated and made fun of by the wife, the mother-in-law, the children? It is obnoxious! We are witnessing the veritable de-balling of the American male on television. Men are becoming benign idiots and that is a trend I have always bucked with Victor. And I always will.”

So soapers, do you think Victor Newman has gone to far? Or, are you enjoying his machinations and payback to those who he does not like, or have wronged him in Genoa City? Let us know!

Gone too far — waiting and hoping Adam swings right back at him.

I am actually rooting for Victor, I think Adam went way to far since he has been here. Who in there right mind would have feelings for someone who made them believe their baby is dead. I dont agree with all Victor does but I do think it is justified

Well at times he does go to far. His comments about the Emmys were right on he is absolutely right!! I still think it would be a kick if Sam was Adams fraternal twin stolen at birth how would he deal with an honorable guy someone who is truly his beloved Hope’s son. Are you listening MAB?

For goodness sake. Bring Victor down a peg or two. Let someone else win. He is now messing in the lives of Victoria an Billie. How many marriages will Victoria need. Get away from daddy girl in a hurry.