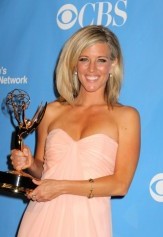 Last night at the 38th Annual Daytime Emmy Awards, the winners in the Daytime Drama categories and various other daytime programming categories were escorted from the stage through the press room, where they were greeted by photographers and journalists from across the globe. In addition, many of the soap star presenters also took some time and posed for some photos and chatted with the press corp.

On-Air On-Soaps put together a photo gallery of some backstage winning moments.  Who was not thrilled for GH’s Laura Wright’s first Lead Actress Emmy? Or, Jonathan Jackson’s win for this sensational performance as Lucky, in the scenes where he confronted Liz and Nik about their affair? In addition, B&B’s Scott Clifton finally shed his Susan Lucci-esque curse winning Younger Actor, and a surprised Heather Tom won for Supporting Actress from the same series!

The Bell family had a huge night! Brad Bell and The Bold and the Beautiful won their third Daytime Emmy in a row with their victory in Sin City for Drama Series and tied with Y&R for Directing Team. Brad’s sister-in-law, Y&R’s Maria Arena Bell, took home her first Emmy ever, for Y&R’s victory as Outstanding Writing Team.

After the jump view our Winners/Presenters gallery!

Remember to view the complete Winners/Press Room photos, make sure to hit the NEXT GROUP button next to the + sign, or just let it play as a slideshow.

So, who are you most happy about winning the gold last night? Let us know!

Laura Wright was the best part of the entire show! so deserving!

..Too bad they didn’t announce the lead actor category earlier. I guess they knew with those results, people would be switching channels real fast. It was terrible..not even clips from the hard work the actors were nominated for..a real slap in the face

James was robbed of the Emmy last night to MP, a guy who wasn’t even expected to be in the running as a serious winner. The whole show sucked and I should have known that once again NBC DOOL would be snubbed and the other soaps pimped. And what was with the two Emmy tie thing? Did they think if one winner won, they could piss off someone else? Doesn’t matter…in my eyes James WAS the winner not only this year, but the last. He deserved it on the merit he is the best daytime saop actor and makes gold… Read more »

Good for her. Thought she got a bad deal from AMC. Finally she was able to do something with her hair. HA HA

Phyliss from Young & The Restless should have won instead of Laura 🙁

James indeed had the best reel. But I’m not surprised. The Emmys are all about politics. Hopefully next year he will be up for it again
, I watched all the clips and he deserved the win!!!! That really sucks James really did deserve it doesn’t these people understand that it takes real talent to turn crappy writing into gold like James has done

I’m a lapsed GH fan and while I didn’t appreciate the scene JJ won for I do think he is a good actor–he cries too much–sorry.
I love Y&R my fav soap and I really loved all their wins and they should have won best show but B&B is okay also.
My favorite win of the night Michael Park for Jack on ATWT!!!!

Woohoo!!! Still so happy Laura Wright won!!! That is the best kind of a win when someone is so talented and has worked for 20 years without a win. So happy! Congratulations Laura!!!

Laura Wright is a great and talented actress. She really deserved to win an Emmy last night.

Laura Wright won didn’t see that one coming. I would like to know what the actors picked for their second tapes.

Remember when no one thought that couldn’t be played by anyone other than Sarah Brown. now Sarah, Tamara and Laura have emmys!!!!!!!! Tamara should have won in 2004 she was robbed!!

i ment to say CARLY

! am thrilled for Laura Wright and Jonathan Jackson. It was very cute and wonderful when Jonathan brought his two children on stage with him. I wonder what they were experiencing with Dad. I did not like the show because I felt I was at some fundraisers. What was that all about. This award show should have been about entertainment, and seeing stars, etc. But to ask for money on an award show is a no-no to me. Granted the charities all were deserving, but then have a show of their own. I think the fans were disappointed. There is… Read more »

Very happy to see Laura Wright and Jonathan Jackson win. I was also happy for Scott Clifton. Sorry that Lexi Ainsworth did not win, especially since her scenes were riveting, but I am sure she will have lots of sensational storylines to come. Very disappointed in the broadcast overall though, as it seemed more like a live advertisement for Las Vegas, as opposed to a celebration of daytime television. What happened to the days where we (the fans) were able to see snippets of the clips the stars entered, when their names were read during the nominations, as well as… Read more »

go spencers, congrats to laura and jonathan of GH , the biggest dissappointment was that awful chick from amc winning in the young actress category, what the hell did she win for?

James deserved to win, hopefully he would get this Emmy soon.

Next time they can held a marathon for all those fund raise projects they was showing all night. They should have focus only on the soaps. Glad that LW won the Emmy and I agree that JS should have won an emmy.

Woohoo!!! Congratulations Laura! Love being able to watch the win… thanks Michael!

OMG been watching for years and this was the Worst daytime Emmys show. Just one big informercial!!!! Laura Wright and Jonathan Jackson the Best!!!! Didn’t even see Clips!!! Very disappointed!!!!

38th Annual daytime emmys awards were over all rush and somewhat boring. Bold and beautiful winning drama series was no shocker, michael park winning again left a sour taste in mouth, laura wright win for lead actress was awesome!, heather tom win was a shocker as well over many talented ladies(I love her anyway), johnthan jackson win I saw coming but I wish. Doug davidsion would have won, brittany allen beating lexi and emily was a huge slap in the face and scott cliftion win ov er chad duell and even days chamdler was a shocker, not really, days is… Read more »