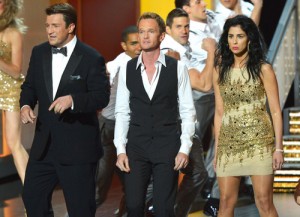 Last night on the 65th Annual Primetime Emmy Awards on CBS, host Neil Patrick Harris gave the show some pizazz with some humorous bits including a spoof on Neil having EHD – Excessive Hosting Disorder, or the production number in the middle of the show when he danced in a soul train line with Castle’s Nathan Fillion and comedian Sarah Silverman.

However, the rest of the show remained plenty lackluster, but through it all 26 awards were dolled out honoring the best in primetime comedy, drama, television movie and mini-series, and Variety and Reality programming.

The uber-popular Breaking Bad now in its final season, finally won the Outstanding Drama Series category after four losses.   Anna Gunn also finally won her first Emmy for the series, in the Supporting Actress Drama Series category.  In comedy, Modern Family became the first comedy to win four times in a row since Frasier had a five-peat in the 90’s.   Here is a complete list of winners below!

Lead Actor in a Drama Series:  Jeff Daniels, The Newsroom

TV Movie/Miniseries: Behind the Candelabra

Actor in a TV Movie/Miniseries:  Michael Douglas, Behind the Candelabra

Directing for a TV Movie, Miniseries or Dramatic Special: Steven Soderbergh, Behind the Candelabra

Writing for a TV Movie, Miniseries or Dramatic Special: Abi Morgan, The Hour

Writing for a Variety Series:  The Colbert Report

I was disappointed that American Horror Story (which had more nominations than any other show) didn’t get the recognition it deserved! Sarah Paulson, Jessica Lange and Zachary Quinto (whose AHS costar James Cromwell took the award) all should have been unbeatable. Also Vera Farmiga was flat out robbed! She IS Norma Bates on Bates Motel!!!! That’s my rant. Thanks!

NICE. ditto! Norma and Norman Bates ROCK! I posted long ago.. that this was THE show to watch… “Bates Motel” – A&E…. look for season 2. AHS… quality stuff… and Jessica Lange will always be my favorite actress… FX – American Horror Story…. Look for season 3. another THE big show ie: people… look for Sundance channel…. “Rectify”…. the bomb…. SO GOOD. THE show three…. it was a lackluster night…. staid and without hooray for hollywood…. I’ll never forget Mr. Soprano himself… and excellent film actor “James Gandolfini”. Mr. Bear Supreme…. Sexy he personified – equated – realed… for me…… Read more »

“Pay no mind to me if this is not your thing….” LOL….that is what I find to be so refreshing about you, Patrick….you just do your own thing and ALLOW the rest of us the freedom to do likewise….. whether we agree or disagree, no matter!!! ; )

it was Wonderful to see Anna Stuart…. ie: Donna Love Hudson – Another World… and she was on AMC as Greenlea’s Mother

LOL… that was so funny and a treat…

Patrick, I agree word for word for word! You are straight up gangsta! Counting the days til AHS:Coven! Unfortunately we still have a bit of a wait for Bates season 2 but it will be worth it!

WINNER: “American Horror Story: Coven” (FX) This just in: People love witches. The third incarnation of FX’s horror anthology, “Coven,” premiered to series-high ratings this week (5.5 million total viewers, a 44 percent improvement on last season’s “Asylum”) and topped all of its broadcast competition among adults under 35. Once all the numbers are in, “Coven’s” premiere is expected to be the most-watched broadcast in FX history. Just another cable success story in the vein of “The Walking Dead” and “Breaking Bad” to keep network executives up at night. @Matthew! so…. stoked…. if you will…. for Jessica Lange along with… Read more »

Thank you so much for sharing that with me Patrick! Who cares what that Emmy panel says, it’s the fans that matter most! That’s awesome news!

You cant pay me to watch the Emmy or any award shows as I disagree with how they award the winners in all award shows or even how they even do the nominating process.

I was very glad to see Bobby Cannavale win for Boardwalk Empire. He was absolutely tremendous as Gyp Rosetti last season. One of the scariest, creepiest characters on TV in a long time. A very well deserved honor!

It’s horrid that they had that “edgy comedienne” sara silverman at emmys. She’s used blackface while tweeting abt “minstrel cramps” and she has uttered Asian american slurs from her “comedy routines” and she has even advocated that comedians should be able to say whatever during their comedic acts. Yet all she did was scream abt the ageist jokes directed at her on weirdo franco’s roast. Would emmys have a comedian be there if he/she used homophobic slurs? Of course not but sara silverman is at emmys bec bashing Asian americans w/ racial epithets is “edgy comedy” for tolerant and enlightened… Read more »

It’s pathetic that diahann carrol and 1 other African american actress and kerry washington are the only African american lead actresses on any tv drama ever! Racist hollywood loves to scream abt homophobia and gay issues yet seldom gives lead roles for dramas to actors of color. Not racially diverse emmys demonstrate that hollywood still refuses to give better roles to racial minorities while the best roles are reserved for white actors only. They must be patting themselves on the back w/ kerry washington and little nods to racial minority actors that fill “diversity quota”. All winners of major awards… Read more »

Whatta ya know….we FINALLY agree on something, bc!….you’re right about how HWood bashes conservatives and GOPers for the very things that they themselves are guilty of doing! Thank you for noticing and calling out the hypocrites….MOST won’t even admit it, even if they do actually notice this fact.

It’s great that grey’s anatomy’s ellen pompeo spoke abt the horrid lack of racial diversity among emmy nominees and emmy show dancers and roles for actors of color. But she’s only white actor to speak abt this pressing topic. White actors can’t stop talking abt gay bullying bec it gets them press. But practically all white actors are dead silent when topic of lack of roles for actors of color and hollywood’s racism are being discussed. How puzzling!