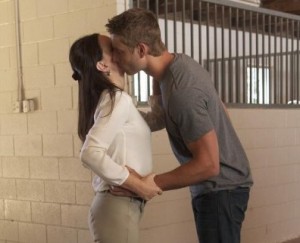 The third season of ABC’s hit primetime soap opera in the Hamptons, Revenge begins this Sunday at 9EST/8CST on ABC! And the series new boss, Sunil Nayar tells TV Guide its sort of a back to basics season after the confusing conundrum many of the characters and the audience at home found themselves lost in during season two!

Nayar relates:  “Last season was very much about destiny, but it got pulled into so many different worlds and got so big and spectacular. So our goal this year is to really take a breath, slow it down and catch up with our characters where they are from where the season ended. We’re bringing everything back to the world of the Hamptons, and we really embrace the lush romance and the intrigue that is the Hamptons.”

The showrunner also shared some Intel on several key relationships that piqued our interest!  First and foremost, Victoria Grayson (Madeleine Stowe) and long-lost son, Patrick played by Justin Hartley.  People who have seen key scenes think their relationship might be kind of “creepy”.  Nayar says:  “I think what maybe makes it feel a little bit creepy is that you’ve never seen Victoria this open and happy with anybody and it creates an intimacy that is almost disconcerting. There’s a vulnerability that brings with it a greater intimacy than we’ve ever seen because she trusts him and he trusts her.”

And as for Jack (Nick Wechsler) and Amanda, er Emily (Emily Van Camp), and her jaw-dropper at the end of season two (admitting to Jack that she is the real Amanda), Nayar says on Jack’s processing of this revelation:  “His goal is to understand who this girl is that has lied for him for two years.  So even though there is an anger, there’s also an undercurrent of his connection to her and memories of who she used to be. He has to reconcile who Emily is going to be in his life, but he also feels the need to move on and find himself a happiness that he feels he deserves.”

Make sure to check out the rest of what Sunil had to say about what to expect in season three!  So now tell us, what do you hope goes on in the relationship between momma bear, Victoria and wayward son, Patrick?  Do you want Jack and Amanda to work their way to each other and through all the lies and deceptions?  Share your thoughts below!

Michelle Stafford Reveals All My Children's Thorsten Kaye To Be Next Guest Star In The Stafford Project!

First off- Sunil is very handsome sexy, I like looking at him lol ..
I have been waiting for Revenge to return since its last episode..
Sunday exciting!!

I really lost a lot of interest in this show last season. Most of it was horrible. I cannot stand Jack and I do not want to see Emily wasted on him. The two actors have zero chemistry.

To me the zinger in this show would be Emily truly falling for the man she has been using to achieve her revenge. Daniel and Emily are so hot and look beautiful.

Hope the stories are better at least this season. Looking forward to how Justin Hartley does on the show.