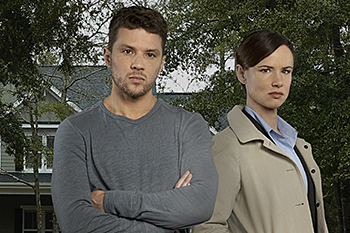 This afternoon is the ABC Upfront presentation in New York City, and prior to the official announcements the network has released their primetime fall programming schedule.

It features new series from former One Life to Live star and now film star, Ryan Phillipe called Secrets and Lies and Barry Sloane, who was just killed-off of Revenge, where he now will star in the new drama, The Whispers.  Returning in their same timeslots next season are Revenge and Nashville which both got renewal pick-ups!

The press release relates: ABC continues its commitment to world-class storytelling and new creative voices with the announcement of its 2014-15 slate of programming, including the addition of 12 new series. Paul Lee, president, ABC Entertainment Group, will unveil the network’s new lineup to the advertising and media communities this afternoon at Lincoln Center’s Avery Fisher Hall.

“Our schedule reflects a judicious mix of boldness and stability,” said Lee. “ABC is finishing the season with momentum — we now have building blocks on every night of the week, and we’re using them to launch our new series. This season we set out to develop passion projects from world-class storytellers and showcase the faces and voices of America. Both plans unleashed a wave of creativity and we’re extremely excited about the new slate.”

Returning this season are “America’s Funniest Home Videos,” “The Bachelor,” “Castle,” “Dancing with the Stars,” “The Goldbergs,” “The Great Christmas Light Fight,” “Grey’s Anatomy,” “Last Man Standing,” “Marvel’s Agents of S.H.I.E.L.D.,” “The Middle,” “Modern Family,” “Nashville,” “Once Upon a Time,” “Resurrection,” “Revenge,” “Scandal,” “Shark Tank,” “The Taste” and “20/20.”  “Marvel’s Agent Carter” and “Galavant” will serve as bridge programming between the fall finales and winter premieres of “Marvel’s Agents of S.H.I.E.L.D.” and “Once Upon a Time,” respectively.  Fall premiere dates will be announced at a later time. Please note shows picked up but not listed on the schedule will debut later in the 2014-15 season.

More about the Phillipe and Sloane new dramas below:

Ben Garner (Ryan Phillippe) is about to go from Good Samaritan to murder suspect, after he discovers the body of his neighbor’s young son in the woods. As Detective Andrea Cornell (Juliette Lewis) digs for the truth, the secrets and lies of this town come to the surface and no one is above suspicion. Ben’s family’s life will be turned upside down as he sets out on a complicated journey to prove his innocence in this thriller mystery from Barbie Kligman (“Private Practice”) based on the original Australian series of the same name. “Secrets and Lies” stars Ryan Phillippe as Ben, KaDee Strickland as Christy, Natalie Martinez as Jess, Clifton Collins, Jr. as Dave, Indiana Evans as Natalie, Belle Shouse as Abby and Juliette Lewis as Detective Cornell.  “Secrets and Lies” was written by Barbie Kligman. Executive producers are Barbie Kligman, Aaron Kaplan, Tracey Robertson and Nathan Mayfield. “Secrets and Lies” was directed by Charles McDougall, executive-produced by Kapital Entertainment with Hoodlum Entertainment and produced by ABC Studios.

Aliens have invaded Earth by using our most unlikely resource to achieve world domination—our children. As the kids unwittingly help these unseen enemies, the clock counts down in this suspenseful race to save humanity.  “The Whispers” stars Lily Rabe as Claire Bennigan, Barry Sloane as Wes Lawrence, Milo Ventimiglia as John Doe/Drew Bennigan, Derek Webster as Jessup Rollins, Brianna Brown  as Lena Lawrence, Catalina Denis as Dr. Maria Benavidez, Kylie Rogers as Minx Lawrence and Kyle Harrison Breitkopf as Henry.  “The Whispers” was written and co-executive-produced by Soo Hugh, with Amblin TV co-producing.  Executive producers are Steven Spielberg, Justin Falvey, Darryl Frank and Dawn Olmstead. “The Whispers” was directed by Mark Romanek and produced by ABC Studios.

ABC’s fall primetime schedule is as follows (all times listed are Eastern); new shows are in bold:

So are you looking forward to the Ryan Phillipe and Barry Sloane dramas? The return of Revenge and Nashville? What do you think of the fall schedule from ABC?  Let us know

The Blake Berris Interview – Days of our Lives

DANG IT…i liked Neighbors and its not coming back…yet The Bachloer is…tv continues to go down the toilet!!!

Why do they continue to roll out all these new, uninspired TV shows when the reality of the matter is that we will all be reading about their cancellations one year from now.

I haven’t watched the Bachelor since the 3rd season. It’s ridiculous. It’s sad that these reality shows garner as much attention as they do. A bunch of non-talent people selling themselves for their 15 minutes of fame. I have watched Grey’s Anatomy since the 2nd season. Won’t be the same without Sandra Oh. I absolutely love Scandal! I watch Revenge and Nashville, too.

I did watch the bachelorette once but only because the son of one of my former high school teachers appeared on it…tv was so much better in the 60s and 70s…most of these reality shows are partly scripted…no way real!!!

I do think it’s interesting that Marvel’s Agents Of Shield was moved an hour later and will no longer be competing directly against NCIS and now it’ll be between 2 new shows.

They cancelled Suburgatory? Damn, I loved that show. And Super Fun Night? ABC, you stink!

I love Barry Sloane and am unhappy that he’s gone from REVENGE. Not sure if his new series will fly; hope so. Would hate to think he got tossed from a successful show where he had a sizable presence if his new one’s a flop.

All in all good lineup!

I am disappointed that Suburgatory isn’t coming back. That was a quirky comedy!

looking forward to secrets & lies – been a fan of ryan phillippe since he was on oltl years ago……………..

How could they cancel Trophy Wife and renew The Goldbergs and The Bachelor?

How on earth can Resurrection be on for another season? I stopped watching it. Very poorly done.

Thanks for bringing back Nashville, Revenge , Scandall, and Dancing With The Stars. The Bachelor and Bachelorette needs to end.

As long as my shows “scandal, Nashville, Grey Anatomy, don’t get canceled , well then I’m perfectly happy.Because will revolve y whole life just to catch the show and don’t care about the time

Please move General Hospital back to 1pm. Best sitcoms, the Goldbergs and Trophy Wives. Don’t think Blackish is going to hit the right notes. ABC used to own Sunday nights but now I’m all CBS on Sunday night. ABC rules Thursday nights. Thanks