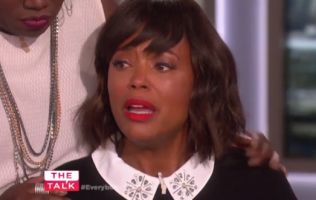 She’s that good, she’s that in-demand, and she has dreams to be a major director behind-the-scenes, because of all of this and more, in a heartfelt and emotional moment on Thursday’s episode of the CBS afternoon talker, The Talk, Aisha Tyler announced her departure from the series at the end of its current season.

Tyler, who has been with the The Talk since 2011 said that she had become too busy with her many other projects to continue co-hosting the daily show five days a week, citing. “I just realized I had to let something go,” as she said it tearfully.

In addition to co-hosting The Talk, Tyler has been upped this season to series regular on  CBS’ Criminal Minds, continues to host the improv show, Whose Line Is It Anyway,  and voices over a character on the animated series, Archer.  She has also begun directing and her first feature Axis received critical-praise and awards. Aisha added that she plans to return to The Talk for guest-host stints and to promote her projects.

Immediately following her on-screen announcement The Talk official twitter feed posted, “Don’t cry because it’s over, smile because it happened. Lots of happy tears as we wish Aisha Tyler the best possible future!”

Watch Aisha’s bittersweet moment after the jump where she tells the viewers at home, and in the studio audience with Julie Chen, Sharon Osbourne, Sara Gilbert and Sheryl Underwood surrounding her, that she is departing the series.  Then let us know your thoughts on The Talk panel without Aisha?  What did you think of her goodbye announcement? Comment below.

Kirsten Storms Back To Work At General Hospital!

Gilles Marini To The Bold and the Beautiful For Summer Guest Star Story Arc!

And I am as emotional that Sheryl Underwood is staying! UGGG!

Good for her for realizing she is overextended with all her jobs.
I will miss her on The Talk; she is smart,fair& very articulate.

I’m not home to watch daytime tv.. If i were home I would not watch it..
I have on occasion clicked through when home with whatever and my gawd was it horrible LOL

do tell– just what is the purpose of the Talk?
why would people want to listen to 5? loud women bitching about whatever LOL.

And why would adult people dress up like Halloween to jump up and down and yell to win a prize ahaaa.

Anyways, if they all left the Talk I’d be cool with it ..
( not like I’d be tuning in anyways)

dress up like halloween – when does that happen on the talk????
i have only watched when they have soap stars on but i have never seen anyone is costumes………………….

You may be mixing up The Talk with The View because your description is perfect for the latter. The women on The Talk are wonderful examples of how women can be together and not bitch, backbite and make women look bad. Sounds like you are a whole lotta fun to be around.

You must have confuse this with The View.

I completely agree with you. Julie Chen acts like she is above everybody. In my opinion, the only reason she has the job is because her husband is a bigwig at the network. She is always talking down to and condisending people as if they know nothing. Like her would is law. I remember reading an article saying that if one of the main hosts deceided to leave, Carnie Wilson would be made the first offer for a permanent position. The only time I watch the show is when they have a person or a segment that I want to… Read more »

Carnie Wilson is a great idea for a replacement.

It is awful and the advertisements is even worse. If you watch any of the CBS shows On-Demand, the ads for the show are shown “ad” nauseum. Not too long ago they had the “Dance Moms” host as a co-host. I thought, “isn’t this woman a criminal?”

Goes to show- I do not watch daytime TV lol confused it all up..
The one Goldie is on (the View?) is just women talking over each other squeaking loud and louder, I saw no purpose to the show – Annoying is what it is..

The Halloween custom was Making a Deal.. they look like dumbarses jumping up and down to win a prize dressed up like crazy wahzus on a monday morning.. LOL

JUST CANT LISTEN TO THIS SHOW…DID FOR AWHILE AND IT WAS THE SAME OLD FIVE WOMEN LOVING THEMSELVES!

These gal pal talk shows are based on chemistry so whether or not the show will suffer from her leaving will depend on who replaces her and if anyone else leaves. The View survived the first couple changes on the panel, but over time, that show became a shadow of what it was— and as cute as a button Kelly and Ryan are– the show was never the same after Regis left. I hoping come fall the Talk will spare us weeks of auditioning co hosts in order to have the big reveal in November sweeps— just chose one of… Read more »

Get a grip lady.Who cares?This shallow,vain woman hyperventilating while bragging about all her great success seems rather self-indulgent.No?And how big of her to announce that she’ll return to promote her other projects.Seem rather narcissistic to me-I’m sure many would disagree with,of course.

After watching Vanessa Williams on the show yesterday, I would love to see her as a new addition. Class and sass!

Ditto.
So emotional, maybe she was pushed out?

who cares?!
bring back guiding light or as the world turns as a half hour show like b n b and air it internationally to make it profitable…there s enough useless talk shows and not enough soaps!

we can only dream I still miss another world

Guiding Light and Another World coming back would be great, even if they are half an hour like you stated.

Aisha Tyler is amazing! I recall her year on THE GHOST WHISPERER and fell in love with her then. She elevates everything she does. Not a big THE TALK viewer but when I see the show, I gravitate to her. Proud of her accomplishments,and to make roads in the industry as a director is admirable.