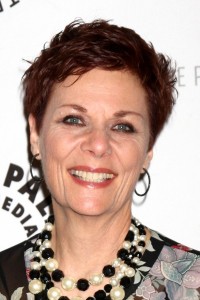 Today in honor of the series 51st anniversary, TV Guide Magazine’s Michael Logan has a fantastic interview served up with the one and only Jane Elliot (Tracy Quartermaine) of General Hospital!

Their chat runs the gamut from Tracy and Luke’s  (Anthony Geary) relationship, how Tracy has changed since the Gloria Monty (former GH executive producer) dark days of her character to the more humorous side of her at times in 2014,  and how she feels that is becoming the late Charita Bauer (Bert Bauer) of GL’s counterpart in Port Charles! In addition, Jane reveals more about her hair coloring relationship with DAYS Deidre Hall (Marlena), plus some tidbits on Elvis, and we learn what her favorite current television show is … Revenge!   Here are just a few delicious excerpts below!

Jane on Tracy and Luke’s relationship: “With Luke, she’s actually showing signs of true love and understanding — qualities that are new to Tracy. Plus, Luke has fallen head over heels in love with her and that just doesn’t happen. Nobody falls for Tracy! And there’s nobody else left in her life. Her family is decimated. Well, Monica is still around but she’s annoying. With Luke, Tracy also gets Dante and Lulu and the baby. She wants family. She wants to belong.”

Jane on how Tracy has changed since her early days in Port Charles and has more humor to her:  “That’s because (then executive producer) Gloria Monty was humorless. She was all about the drama — the melodrama — and so everything had to be very, very arch and dark. She was extremely specific about what she wanted and you played it her way, not your way. It wasn’t until later, when I worked with Hugo Napier (Larry) and Gerald Anthony (Marco_), that Tracy started lightening up. Loved those actors! You know, it’s so interesting to now be the oldest actor under contract at my show. How the hell did that happen?”

Jane on the evolution to how Tracy was the original brat child of Edward Quartermaine to who the character is now:  “And I am now the Charita Bauer of GH! And, by the way, Charita was and remains my all-time favorite actor on any of the soap operas I’ve worked on, because she had such grace and humility. Every day at Guiding Light was like her first day on the job. She was so filled with gratitude for the work and she had such kindness and generosity toward everyone. She was the first to learn your name, the first to welcome you.”

What do you think of Jane Elliot’s comments on Tracy and Luke, and the evolution of Tracy?  Comment below!

Hunter Tylo Returning To The Bold and the Beautiful For May Sweeps!

I absolutely adore Jane Elliot as Tracy Angelica Quartermaine! Ms. Elliot is an amazing, charasmatic, and comedic actress-brings her A-game to each and every scene! I literally laugh out loud when she is battling with AJ, Monica, Luke. I also liked her friendship with Connie. Was nice to see Tracy have a friend in town.

Is Luke Luke, Jerry Jacks, Bill Eckart, Victor Cassidine, Victor Jerome, The Balkin…or Suzanne, or Valentin Cassidine played by Vincent Izzary? I remember Jane in Change Of Habit with Elvis…the Gloria Monty years was GHs best…hope Tracy is with the show til if and when it goes off the air!!!

Love Tracy and would like to see a lot more of her onscreen.

Tracy is a cornerstone of GH ..
A great woman and actress!!

Jane Elliot is the actor who keeps me watching General Hospital. She plays Tracy so well and brings humor, depth and surprising wisdom to the role.

On a personal note, I love that she is comfortable in her own skin and shows the world how utterly great and sexy an actress can look without becoming a surgical/botoxed mockery. She is simply fabulous!

Jane Elliott is phenomenal and I adore her and whenever she is on she lights up the screen! She always brings her A game and she makes everyone else’s game better too! Can’t wait to see what happens with her and faux Luke! Love that Ned is coming back and wish she could have Dillion back too! The interview looks great! Thanks for sharing this Michael!!!

Loved her comment and remembrance of the wonderful Charita Bauer. Jane’s tenure on GL (the Doug Marland years) was the best in the show’s history! Carrie, Ross, Justin, Nola, Quinton, Henry, Vanessa, Gracie, Mrs Renfield, Helena Manzini — never was a better cast of characters assembled on a soap! (Unfortunately, GL would turn into “The Reva Show” less than two years later.)

Certainly, she’s one of the top 2 or 3 characters and actresses on GH. Her scenes are always ones that make me sit up and pay attention to GH, after my attention wanders to anything else while “watching” Sonny, Carly, or Franco scenes. I love it when Tracy and Monica do battle, and also when they’re protective of each other when the Quartermaines are under fire.

I think Tracy is a great, iconic character because aside from being “Port Charles Royalty” as a Quartermaine, she’s lost none of her “bite” and savvy but has emerged a better-rounded woman than in years past with a developed humility and grace, something that was missing in her younger years. Jane, you have always been one of my top five fave actresses on daytime and please continue to play the heck out of this great character.

jane rocks, she’s simply one of the best actresses around period.

Jane Elliot’s appearances on GH are always a gift. She seems like such a fearless performer and makes interesting choices in the way she plays her lines. When Tracy points her finger, you know something important is happening! The idea that “acting is reacting” might be a joke, but it is true and JE excels at it– the wide eyes, the pursed lips, the hand on the hip as Tracy impatiently waits for someone else to stop talking. JE truly inhabits her character.

I always enjoyed Tracy’s acerbic wit and snappy rejoinders until AJ became the constant butt of her nasty comments. I could understand them at the beginning of SK’s return stint on GH when they were waging war (and trading snipes) over control of ELQ, but once the Franco/Kiki and relish debacles were under the bridge, she definitely should have had a more conciliatory tone with her nephew, particularly when his battle with alcohol once again reared its ugly head. By that time, she had nothing left to prove, yet all she ever did was take every opportunity to be harsh… Read more »