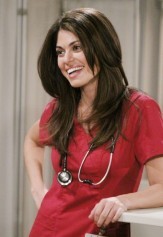 In a new interview out today from TV Guide, the on-screen brother/sister act of All My Children’s Jordi Vilasuso and Lindsay Hartley, (Griffin and Cara Castillo) opened up about the about-face in their storylines once ABC announced that they canceled the 41-year-old ABC Daytime legacy soap opera.

As fans are witnessing now, some very strange changes have been made on the canvas regarding Cara and Griff! First, Cara fell into bed with David Hayward! And somehow Griffin has just disappeared thanks to of all people, Zach Slater, who is acting kind of weird himself!

Here are a few excerpts from the piece about these actors trying to get their footing when they have been thrown curve ball after curve ball!

Lindsay and Jordi speak to how once the cancellation was handed down of there were conversations about what that meant for their characters.

Hartley: “Yeah, as you know Cara had gotten involved with [Jake’s brother] Tad. They were going to try and incorporate me having feelings for Tad in a different way than I did for Jake. That was going to be another love triangle, or rather, an obstacle to keep Jake and Cara from being together too soon. The episode where Jake and Cara kissed, they were actually supposed to sleep together, but when the show got canceled the writers turned it into a kiss so it would be easier to make future adjustments. They switched me to Tad altogether when Dixie was coming back. They said to me that Tad and Dixie are the supercouple. I wasn’t aware of David though! I thought that Tad going back to Dixie was the end of my story, and that Cara would just go back to Doctors Without Borders. I don’t think the producers knew at the time either that I was going to have this relationship with David. I figure they would have told me.”

Vilasuso: ” At first, I was weird about it. I had a kind of blasé attitude about it. That was probably a defensive thing. I guess when it really hit me I did get upset about the whole thing because there was nothing I could say or do about it. We had discussions with [executive producer Julie Hanan Carruthers] about what we were going to do to wrap Griffin up, and I think they’ve done what they can do. They have so many people coming back, and they want to fulfill so much of what they believe the fan base really wants … But I think it’s become a little diluted in terms of what the real arc of Cara and Griffin should be.”

Lindsay and Jordi if after seeing the final scripts, do they think longtime fans of the show will be satisfied.

Hartley: “We hope so. That’s what they’ve been trying to accomplish. Hopefully that will be what happens.”

Vilasuso: “I hope so too, but it’s out of our control at the end of the day. I think it’s hard to wrap up 42 years in 40 minutes. Susan Lucci threw a lunch yesterday and she talked about how she did a interview for some Internet radio show and after she agreed to do it, the guy had 500,000 people write in, excited she was going to be on. I think the fans are part of the reason we’re staying alive. I think a great number of them are going to come along.”

AMC Creator, Agnes Nixon reveals a big cliffhanger ahead as show moves to the web!

Sorry but I am not interested in reading or listening to these two whining about what has happen to them. They are newbies and really have no history with AMC. I care more about the people that have been on the show for many years and all the people that work behind the scenes. They are all losing their jobs too. Many of these people moved out to California thinking that the show was going to be saved and they would have a job for many years to come. These two need to get over themselves.

LOL….true and funny. In my opinion, that’s been the problem with AMC…..too much focus on these stupid newbies or people that should be supporting cast members, and not enough time given to the Veterans of the show. I mean, think about the cast members that they have right now…..with the exception of a handful of actors, the majority of the people are newbies or younger actors who should not be anchoring this show.

It was important for them to step aside so that the show could honor the characters the fans have cared about for years. The characters that SHOULD have been anchoring this show all along, not just at the broadcast end. If Frons and Sweeney hadn’t tried to reinvent the wheel with AMC, and hadn’t dumped both veteran performers and legacy characters, there is a good chance the show would still be broadcast. And in that case, these two would still have jobs. And from what I’ve heard, they’re both going with PP online deal, so what do they have to… Read more »

OMG!!!! I have been thinking that about Gordi for the longest. I’m glad I’m not the only one that noticed that.

For heaven’s sake at least spell his name correcty (Jordi) if you’re going to refer to him! He’s the most gorgeous hunk that’s ever been on that show – some people are bored sick w/the same old annoying actors! My women’s club is nuts over him! What is this hatred thing? Why do you hate this actor? He knows how to convey emotion with his voice instead of coming across stiff and robotic like some of your so-called legacy characters.

oh please, the guy can’t act his way out of a paper bag….and frankly, I don’t care how you spell his name. Bring back Josh Duhamel and kick this guy to the curb!!

Um Lindsay did not move out to LA for AMC shes been on soaps for the past 10+ years, yeah maybe not with AMC but shes been involved with soaps for a while and is a talented actress.

I’m not saying she’s not talented, but I don’t think she should be featured so heavily, especially during the last days of AMC on network television. This is a 41 year old institution and she’s only been a part of AMC for less than a year.

I don’t think Lindsey Hartley has any reason to complain. She’s getting more airtime than anybody including Alicia. Am I the only one thinking that they are trying to make her the star of the show. As for Griffin, I don’t like the character or the actor at all and I am not a Zendall fan.

Who cares what you like – in the grand scheme of things it won’t make one whit of difference. Maybe you’re just threatened by a man that attractive.

I am actually appreciative of the interview the two of them gave. I have greatly enjoyed their presence on AMC and was a little concerned about what would become of Griffin with the return of Zach & Cara with that surprise tryst with David. Given the comments, I am in the proud minority happy with the performances both have given, which have been touching, nuanced, and spectacular. I hope that the AMC powers that be keep both on hand for the online transition because Amanda/Jake/Cara is a triangle which would benefit from the Broderick touch, and I suspect there is… Read more »

Thank you for this posting. Very well said. I too have enjoyed Griffin and Cara Costillo on AMC. I’m missing Griffin not being on this past week. Hopefully they are offered contracts with PP and stay on with AMC to the Internet or Cable. Very sad that one of my favorite Soaps is ending on TV.