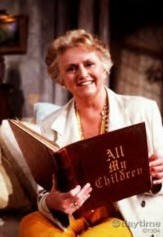 What unbelievable timing, and with such a heavy heart tonight, On-Air On-Soaps has learned of the passing of All My Children’s original heroine, and lead actress, Mary Fickett!  For over 26 years, Fickett played the role of beloved Nurse Ruth Martin.  Mary made a brief and final return to the series in 2000.  The role has since been played by Lee Meriwether.

At the height of the Vietnam War in the show’s 1972-73 season, Fickett delivered a touching monologue expressing her character’s doubts about the war and fears about her drafted son. Ruth’s speech resonated with millions of viewers across America with the same doubts and fears. It also won Fickett an Emmy in 1973, the first ever awarded to a performer in a daytime drama. With Ruth and her doctor husband as the drama’s tent-pole characters, All My Children became the top-rated daytime TV drama in 1978. Ray MacDonnell played the role of Dr. Joe Martin, Fickett’s TV husband.

Fickett “never really acted,” MacDonnell said in 2008. “She was just a wonderful human being and a delight to work with. She was very bright and always cheerful and inspired natural emotions in me and her fellow actors.”

According to Fredericksburg.com, “Mary Fickett, a New York actress whose career spanned 50 years of radio, television, stage and movies, died Thursday at her home in Callao, Virginia in Northumberland County. She was 83.”

All My Children is said to now be planning to dedicate the upcoming September 21st episode to Mary, two days before the show ends its network television run. What irony that as AMC winds down its incredible journey and legacy on daytime, that its original star passed away Thursday night before its conclusion.

On-Air On-Soaps thoughts and prayers are with Mary’s family, friends and longtime colleagues.

Now watch a vintage clip from AMC when Ruth and Joe deal with discovering the death of Grandma Kate Martin and much more.

There was an article a few years ago, she was bedridden and living with her daughter. Someone asked for happy birthday wishes be sent to her and they would bring them to her daughter. I sent/posted mine. I hope she did receive them all ultimately.

This is something else that she passed away near the time her show is going dark. RIP Mary Fickett.

Very sad news…she has been missed on AMC for years (no offense to Lee Meriweather). I’m sure Fran Heflin gave her a big hug from all of us…

I am so sorry but it seems all most karma that she has left this earth.I watched faithfully and just adored her.Thanks for letting us know an angle has gone to the angels.Wonderful actress so real being a nurse and her family so important to her.

omg!! she was just awesome in the role of ruth martin – my heart & prayers definitely go out to her family & loved ones……..

What a gift she gave us for almost 30 years. She was an incredibly important part of AMC for me from the very first day. I don’t know why, but for some reason, that actress and that character always had a great appeal for me. In Chicago, where I’d moved from Iowa in 1972, I actually got to meet her. A friend who worked at a department store, Carson Pierie Scott, called me at the bank I was working at to tell me that RUTH MARTIN was on her floor!! I got permission for an early lunch and ran right… Read more »

Actress Mary Fickett, who twice appeared on ‘The Edge of Night,’ and was married to Edge long-time director Allen Fristoe, has died in Fredericksburg, Va., at the age of 83. Mary Fickett’s passing now makes four of the most recently cancelled shows have suffered losses in their professional families. Days before the final airring of GL, Tom O’Rourke, aka Dr. Justin Marler, died. O’Rourke’s passing was ironic, as his character was the biological father of Phillip Spaulding, and days before GL’s final episode, the man who had raised Phillip, Alan Spaulding, died (played by Ron Raines). As we all know,… Read more »

Rest in peace, Mary. We love you & Ruth very much!

Oh what sad news….Rip Mary and God speed.
Your good works on AMC will never be forgotten.

Sad news….as with Helen Wagner (ATWT) she didn’t make it until the end (of her show’s run).

I always liked Ruth my deepest condolences to her family.

Mary was as All My Children is, part of our family. She seemed like a sweet, genuine person. My deepest sympathy to your family Mary. May God grant them peace. Thank you for being a part of our lives for 30 years!

I am so sorry to read this. I grew up with this wonderful woman , watching her daily. She was like family. Rest In Peace Mary. We love you always!