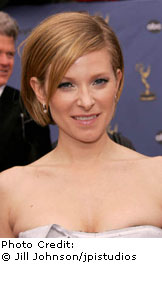 Cady McClain (Rosanna, ATWT) talks with Soapcentral’s Dan Kroll, in an explosive interview about her departure fro Oakdale, her time as Dixie on AMC, and the state of soaps.  This candid one-on-one feature has some must-read qoutes from Emmy winner McClain.  Here are just a few excerpts. First, McClain’s thoughts on AMC’s disregard for character history:

“Now it feels like they’re throwing out all that history throwing all the books out the window. My opinion is if you’re gonna throw the book out the window wipe the slate clean, call it something else, start over with all new actors, and just do that. Because the reason that daytime is so successful and so long-lasting is because of that history. There have been people who have been able to pass down information about this character who played this role that meant this to the show. Clearly different actors can play that same character. So no one actor can make or break a show. I don’t think so. I do think that if All My Children lost Susan Lucci, that might be an exception to the rule, but maybe not — you never know. Actors know that we’re always expendable. We’re wallpaper. Nobody’s too big to be fired. It’s just not the way it is.”

Then McClain offers her thoughts on what soaps need to do in terms of storytelling to garner more of an audience and to move the genre forward:

“I think there are a lot of other issues that can be dealt with in an interesting and unique way, and people would tune in for that. The Luke and Noah story is freaking huge. And now they have a gay story one One Life to Live. It’s about time. I still wonder, though, where are all the Black people? There are no Chinese people. There are no Jews. Whye aren’t they represented? Not everybody’s a Protestant– not that there’s anything wrong with it. The United States is made up of a lot of other kinds of people. Again, I think it’s condescending to have your token Asian person or token African-American person. Families interacting, dealing with each other. The melting pot. Everybody has the same dream. White trash and the rich. Culture clashes. That’s the stuff that makes up daytime tv and the stuff daytime can do better than primetime.”