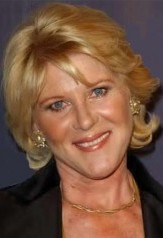 The Bold and the Beautiful’s, Alley Mills is front and center on the upcoming January 30th and 31st episodes of the CBS sudser. That is when Pam Douglas gets caught by big sister, Stephanie ( Susan Flannery) for stealing all the designs at Forrester Creations and giving them to the rival fashion house! In addition, Mills had the opportunity to do some heavy duty flirting on-screen with Jack Wagner’s Nick Marone!

Now, in a new interview with TV Guide, Mills previews the fallout when her betrayal is revealed and how it was making out with soap leading man, Wagner.  Here are a few excerpts!

Alley on what will happen to Pam after she is found out:  “This could take her to a very dark place. It never occurred to her that she’d get caught. She doesn’t have anybody left in her life. No friends. No men. This is bad. The shocking thing is that Stephanie doesn’t blow when she finds out Pam’s the thief. She’s disappointed and really hurt, and for someone as fragile as Pam that’s devastating. [Laughs] At least Stephanie doesn’t throw Pam off a balcony. She’s been known to handle problems that way!”

Alley on Pam being used by Nick as a reward for her theft:  “Nobody was using anybody there. The great thing about Pam is that she knows exactly what Nick’s all about. Their flirtation was a lark. She was just having fun. And he actually had fun with her! He wasn’t rolling his eyes and going, “Ugh! I have to kiss Pam.” He actually liked it. Pam is a hoot to hang out with, so it wasn’t like the worst thing that ever happened to him. And what made the whole thing work on-screen is that Jack Wagner wasn’t rolling his eyes because he had to kiss me. He had fun, too! And Pam likes Jackie because Jackie doesn’t treat Pam like an idiot, which is what everyone at Forrester does. She’s kind of a joke over there  .It’s terrible that I can relate to this. [Laughs] I guess I’m that desperate sometimes! Hey, if you had a crush on someone and you knew it could never work out, the two of you might still have a fling anyway if you provided some sort of service to the other person — like if you wrote about them in TV Guide.”

Are you looking forward to the upcoming episodes featuring Pam? Let us know!

Kristen Alderson tweets she has signed a 3-year deal with General Hospital!

Sneak Peek: Susan Lucci returns for an all-new episode of Hot in Cleveland!

I love Pam! Bring on the lemon bars!

I love Pam too. I was hoping Nick would really fall for her. I hate the way they made Stephen walk out on her!

Pam is great, I adore Alley Mills and did so long before she ever set foot on the bb set. It’s nice to see her get some storyline for a change. It’s annoying however the way that Stephen had to have abandoned her just so that Patrick Duffy could go back to Dallas was annoying and the way she blamed Stephanie was half baked.