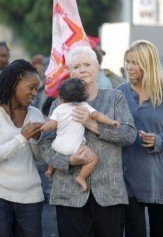 Brad Bell has been on fire for the last three soap seasons, winning two Daytime Emmy consecutively for Outstanding Drama Series, and in episodes that aired last week, and now two more being heavily promoted as must-see B&B and daytime TV, Bell looks to be headed for another banner Emmy year.  As Susan Flannery’s, Stephanie Forrester battles with stage four cancer escalates, so does the show’s focus on the homeless of Los Angeles and the real life struggles of this part of society left behind and sometimes frowned upon.

Brad Bell hopes with these upcoming very personal episodes from Skid Row and the Union Rescue Mission on October 28th and 29th starring Flannery and the homeless, that people will get a real sense of this slice of life.   Here are a few excepts from his new interview out today with TV Guide!

Bell on Susan Flannery going basically unscripted into these poignant episodes: “Susan said, “I don’t have much of a script here.” And I said, “That’s because there isn’t much of a script. You and I are going to take a skeleton crew and go downtown — I’ll be right there with you — and we’re going to ask questions and put the camera on the homeless to find out who they are. We are going to give them a voice.” And Susan was a natural. She was Oprah in a minute! And that turned out to be the day the temperature in downtown L.A. hit 113 degrees! These episodes are half B&B, half reality. For the October 28 show, we went to Gladys Park, in the heart of Skid Row, and talked with many of the people there. Most of them have been in prison, addicted to drugs, but are on the road to recovery — at least we hope. Then on October 29 we go inside the Union Rescue Mission and meet some of the homeless families. The mission has taken them in, feeding them, giving them a room. This is unlike anything we’ve ever seen on our show and that’s hard to do after 23 years on the air.”

Bell on what is the true prognosis of Stephanie Forrester’s battle with cancer: “She’s going to be in a precarious spot for quite some time. At least until we renegotiate Susan’s contract. Stephanie’s attitude is, if she dies, she dies. But while she’s living she’s going to try to make the world a better place. She does not want those sad looks, she does not want to hear that tone in people’s voices, she doesn’t want people reaching out and helping her — she doesn’t want any of that. Because, even with cancer, she’ll flatten anyone who tries! There will also be some interesting stuff with Taylor [Hunter Tylo]. Stephanie has now bonded with Brooke [Katherine Kelly Lang], having shared something so intimate and incredible with this journey of the cancer, and Stephanie has said that she loves Brooke. Taylor has always perceived herself as Stephanie’s best friend. Will that last? Could Taylor be left behind as Brooke becomes even closer to Stephanie? There are some interesting possibilities there. But some things will never change, like that recent scene where Brooke said, “I love you, Stephanie.” And Stephanie said, “You’re still a slut from the Valley.” What a supercouple I have with those two”

Soap Stars On What's Cookin' On Their Shows & In Their Kitchens!