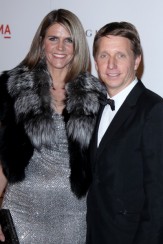 It was day and evening that soap opera power couple Brad and Colleen Bell, the head honcho of The Bold and the Beautiful and his wife, the Director of Special Projects, hosted Hollywood elite and very special guests who paid up to $ 35,800 for a dinner and the opportunity to see and meet President Barack Obama and First Lady, Michelle Obama.

The fundraisers were held yesterday the the Bell’s beautiful Holmby Hills, California Estate, which often is used as the fictional home of Brooke Logan on the CBS soap!   Before President Obama spoke to the crowd, the just crowned five-time Grammy winners, The Foo Fighters, performed on the grounds for $ 250.00 a piece ticket  with a 4-song set including“Learn to Fly,” “Hero,” “Walk,” and “Everlong”.  What followed were short speeches by actors Rashida Jones and Jack Black.  Next, Colleen Bell introduced Obama saying, “He reminds us that change doesn’t come easy or fast.”  Obama then walked on stage to applause.

According to the HuffingtonPost.com report “Obama spoke in front of a crowd of 1,000 Angelenos on the lawn of soap opera producer Bradley Bell and his wife Colleen, with familiar faces in the VIP section included actors Mila Kunis, Don Cheadle and Paul Reiser and celebrity chef Wolfgang Puck.  After the concert and speeches were over, Obama was led inside the Bell home for a $35,800/plate fundraising dinner. Guests at this more intimate event included actors George Clooney and Jim Belushi.

Days of our Lives star, Sarah Brown (Madison) who appeared a few years ago on B&B posted on her Facebook page, “Had a great night at the Obama fundraiser tonight. It was an inspiring evening! I got to see some of my friends from B&B and had the opportunity to meet two of my favorite artists Herbie Hancock and Don Cheadle! The Foo Fighters, Jack Black, and Colleen Bell opened for the President. Got some great pictures. XO”

So do you wish you were at the events yesterday?  Are you glad to see soap opera movers and shakers participating in such an important time in our country? Let us know!

Darnell Williams reveals more on his new role on Y&R as Sarge!

Y&R's Michael Muhney on speaking out against online bullying & fighting back for what you believe in!

I love B&B! Glad to the upswing in the ratings in recent months. B&B is my “guilty pleasure” soap. Kudos to the Bells.