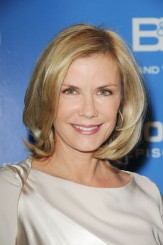 Earlier this week, On-Air On-Soaps caught up with Katherine Kelly Lang (Brooke) on the set of The Bold and the Beautiful’s 6000th episode celebration.  During the festivities, the series unveiled its brand new blue logo, and its new opening title sequence. And as the stars milled about the soundstage after the several presentations for their many accomplishments, we caught up with Katherine, one of the series four original stars, for a “quickie” interview to find out her thoughts on myriad of subjects.

From Brooke and Thomas’s relationship, the status of Brooke and Ridge, her feelings on working with Susan Flannery (Stephanie) in tackling the social issues of the day, which have now become a staple of the Daytime Emmy Award winning drama, Katherine was her fun, effervescent, and honest self.  Here are her comments below!

KATHERINE: Yes, and the new opening was beautiful, but it went by too fast, though.  I wanted to see more of it, so just keep it going! (Laughs)

So you were in front of a green screen that made it look as if you and the others in the cast were at a fashion show?

KATHERINE: Yes, and we had to pretend we were watching models and reacting, but not moving too much.  I am saying to the director, “Is this weird?  Does this look right?  I don’t know what I am doing!” (Laughs) But it looked and came off great, and very pretty!

KATHERINE: Can you believe it?  I have to believe it’s just a tease for the audience.  I mean, really, what can they do there?  I think they wanted to create more family problems with Taylor and Brooke and the fighting that happens within that triangle.  I was a little concerned because there is no way that Brooke could get caught up in that, because that would really be bad.  I don’t think she would be redeemable after that.  The only thing that would make sense is if he fell for me over the fact of the son wanting to take over his father’s life.  That could be interesting if they delved into that some more.  I am not sure what they are doing with it, and if it’s really going somewhere.

How is Adam to work with?

KATHERINE: Adam is great, young and fun, and very innocent!  They give me all the young cute guys and it’s hard work. (Laughs)

How do you feel about the Ridge and Brooke relationship at this point?

KATHERINE: I like what they are doing with Ridge and Brooke right now.  They give us stuff to do, and it’s not peachy keen all the time.  Certain things come up and we have to deal with them. Their love is stronger than letting every little silly thing that comes up break them apart.  I don’t think they will be breaking up anytime soon, but who knows? (Laughs)

I was talking to Jack Wagner and we were both saying, “I think Nick and Brooke are sexy together!”  What do you think?

KATHERINE: Yes, I thought they always were.  Jack is kind of nitty gritty with his character and very raw.  It’s interesting and something different.

When you look back at 6,000 episodes of B&B, what stands out for you playing Brooke?

KATHERINE: I really loved some of the beginning things; the first four years when Brooke was with Ridge, but Stephanie was really after her to get away from Ridge and out of the house, and the bad fights we had.  I loved those earlier scenes with that dynamic going on.

You have had the opportunity to work with Susan Flannery in such big social issue storylines over the last few months, such as the plight of the homeless, and the lung cancer story.  What are your thoughts about being an integral part to their success?

KATHERINE: I am just so pleased we can do these stories and get the word out on whatever issues there are, and help raise awareness and put it out there.  We have this platform of millions of people watching around the world, so let’s do something that is not just entertainment, but let’s do something else once in awhile.  We need to bring a voice to issues that need it.   I think we are trying to help in more ways than just having a simple storyline…. with the lung cancer story.  I feel we also really helped with the homeless a lot, and the rape storyline, when people did not know who to call or needed help.  Our show was able to disseminate that information for viewers.  You don’t realize how many people are out there watching and connecting to that, and want to help.  You see from our vantage point what we do reaches a lot of people, and that makes a difference.

When you found out that Stephanie was going to rely on Brooke for help through her cancel ordeal, what did you think of that twist between these bitter rivals?

KATHERINE: I thought it was great, and a great way to change our relationship and do something different.  It was especially rewarding having the opportunity to work with Susan Flannery like that.  It was amazing, and to be given the opportunity to tell that story, I was thrilled.

See OLTL's Kim Zimmer in Off-Broadway play, "Love, Loss, and What I Wore"!

Jennifer Aniston on "The View", "I Just met Viki from OLTL & almost passed out!"

I have never been a fan of KKL since I started watching this show and Brad Bell trying to make Brooke into a saint has not change my mind. The so called friendship between Brooke and Stephanie is so fake. For Brad Bell to claim that he cares for the homeless is bull. He pass by these people for years without doing nothing, but now trying to get another Emmy, he throw them in the mix. Marcus treated Steffy like a Lady, but she had to have the creep Rick. Now they hook up Marcus with Amber mess, and kick… Read more »

There’s a sweetness about Brooke that came across even when Brooke was doing really naughty things.i want to know what she has so I can buy some.She’s slept with father, son, brother, daughters’ husband. other daughters boyfriend, and many more guys than most.I just hope Thomas won’t be the next in line, that , even for Brooke, would be crossing the line! I like KKL and love the way she looks.She’s so pretty without being plastic unlike Hunter Tylo who at one point in time was one of the most beautiful women on TV.not anymore, what she did to her… Read more »