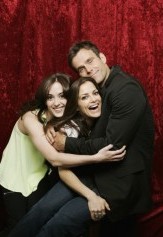 In a brand new interview posted today with Michael Fairman for Advocate.com, the new Bianca Montgomery, Christina Bennett Lind discusses taking on this key role on All My Children.  As daytime television, prepares to lose its other major gay soap characters come fall, (with the loss of the gay romance from As the World Turns), it makes Christina’s new acting assignment all the more interesting.   Find out what she has to say about any jitters on taking over the role from Daytime Emmy winner, Eden Riegel, And, what she would like to see addressed to the LGBT community and viewing audience through Bianca.   Christina also reveals that her screen-test was with (the pictured), Cameron Mathison (Ryan) and Rebecca Budig (Greenlee), who are fast becoming Christina’s best buds on the set   Here are a few excerpts:

Christina on gay issue she would like to see addressed as Bianca: “I think they have done an amazing job at All My Children of presenting a gay story long before it was the somewhat “norm” … the first gay on-screen kiss, a marriage, and things that the gay community in America are fighting for, their civil rights and equality. It seems Pine Valley is cool with Bianca. But what I am a little curious to see is some sort of real-life conflict arrive and see that some people in her small town do not accept her sexuality. In a sense, that is pretty relevant and controversial and true. Because Pine Valley is the exception, it’s a beautiful utopia right now. I wouldn’t mind attacking those issues that are happening in small towns right now.”

Christina on feeling pressure taking over the role of Bianca: “In the beginning, I did feel a little bit of pressure when I was auditioning for the role. I did look at some of Eden’s footage online to prep for it. She, for obvious reasons, was so beautiful, real, and honest in her portrayal of Bianca. Ultimately, what it came down to for me was not trying to mimic her. Part of me feels very strongly that Eden created a character that was so well-written, detailed, and complicated, and the element of being gay was part of who she was, but it did not define her. I sort of wanted to take that and breathe my own life into it and do something else by using myself rather than using someone else’s interpretation. I understand these emotions and all humans do, of wanting to support your family and be equal and be in love. Ultimately, I said, “I can feel the pressure, but I am going to let it go.” The role is so full and rich that I thought, Well, now I am just going to throw myself into it.”

"Venice" fan gathering with the cast set for July 1oth!

Poor Lind. TVGC’s branco is already critiquing her for the comments she made abt Bianca’s sexuality not defining her. He’s draping himself in a rainbow flag yet again and being all “activist” ish, yet his bias is so obvious. He’ll critique Lind for saying that abt Bianca, but he’ll never bash B&B for no LGBTQ characters ever. He’ll never critique Valentini for axing OLTL’s kish. But he called ABC the “homophobic network” recently in his column, yet AMC is bringing Bianca back thru Lind! And so what if Lind does not feel like Bianca’s sexuality defines her? Lind is portraying… Read more »

I am glad that AMC is going forward with Bianca and her storyline. They have to keep the gay stories in the forefront and the fans have to keep supporting them, otherwise, they will disappear without anyone caring. I hope the new Bianca will make her memorable once again and the writer’s will be up to the challenge……..

I would like to bianca takle that kind of issue, because whe Binks came the only who was opposed to was Erica, I would like to see some really come to town and challange the Kane women on this issue JUST FOR SOAP ENTERTAINMENt, I love Bianca, she is amazing Charater and has been through so much and had been survivor