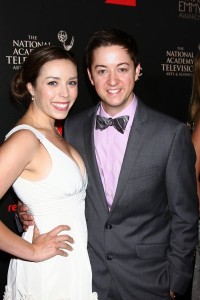 What a week it has been for former General Hospital star, Bradford Anderson! First on Thursday, he receives a Daytime Emmy nomination again for Outstanding Supporting Actor in a Drama Series for his work as Damian Spinelli!  Then on Friday, his wife Kiera gives birth to the couple’s second child and it’s another beautiful little girl!

On-Air On-Soaps couldn’t have called Anderson at the most inopportune time to wish him congrats on his Emmy nomination, as when we did he informed us his wife just gave birth a short time ago and he was at the hospital with the family.  We offered our congratulations to Mr. Anderson on the spot!

Next, in one of the sweetest honors we have seen Bradford tweeted: “A big week for sure. Today we welcomed our 2nd daughter, Finola Leo Anderson. Juna is thrilled. @vinoyogimama was the MVP. Obviously.  Thanks for the good wishes all! And Finola is a family name, not to mention the name of one of the coolest gals we know. So, perfect!”

Later, Kiera tweeted when asked by a followers on Twitter the reason the couple chose the name “Finola” added this sentiment: “It’s a family name, but we agreed that our daughter couldn’t have a more graceful woman to look up to than @finolahughes“

Congratulations are in order for the newest addition to the Anderson home! So what do you think about Bradford and Kiera naming their daughter “Finola”? Share your thoughts below!

Who Could Have Shot Nick Fallon? Watch This Week's Promo From Days of our Lives!

REVENGE Begins Its Roll-Out Of Next Week's Season Finale! The Fate Of A Major Character Will Be Key!

Congrats to Bradford and his wife on the birth of their second daughter.Plus even though Finola is a family name i still think it’s a nice nod to Finola Hughes.Also Bradford is probably happy about been nominated again for an Emmy but i’m sure the birth of his daughter means more to him.

Finola, how perfect, I agree it’s a perfect name !

OMG, so cute. And just seeing BA’s utterly joyful face reminded me of why I miss Spinelli SO MUCH on GH. The man brought true joy to his work, and gave joy to those who watched. Truly missed on GH by this viewer.

I miss him too…i cant stand Levi and hope he is working for faux Luke and the one who caused the Patrina car accident and will be found out and sent away for good!!!

wow. his wife is beautiful. Love that name finola…..its different. did he take it because of his co star on the show?
perfect little family. congrats to both of u !!

Congratulations to a superb actor and fellow New Hampshireite! Blessings to your wonderful family Mr. A.!!!