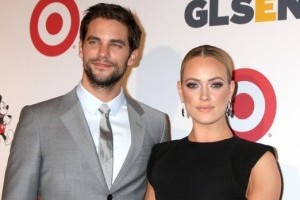 Over the weekend, the stars came out for Los Angeles GLSEN Respect Awards for 2013!  The  annual gala, held this year at the Beverly Hills Hotel, is to recognize the exceptional efforts of individual and corporate leaders who have made a significant difference to ensure schools are safe for lesbian, gay, bisexual and transgender (LGBT) students and their allies.

Pretty Little Liars and Days of our Lives star, Brant Daugherty attended with his Dancing with the Stars partner, Peta Murgatroyd.   Also in attendance were: Jim Parsons and Mayim Bialik of the Big Bang Theory, Linda Bloodworth-Thomason, creator of  Designing Women, and executive producer of the new hit documentary, Bridegroom, Dan Bucatinsky from Scandal; Lily Tomlin, openly gay NBA player Jason Collins, and out country & western singer, Steve Grand, among many others!

The event was sponsored by The Walt Disney Company,  Wells Fargo, and Target!  In addition, as we previously mentioned, GLSEN is continuing to holds its online auction with some pretty incredible items up for bids, one of which is a walk-on role on ABC’s General Hospital given to the organization by GH executive producer Frank Valentini.  You have till  October 30th to place your bid!  As of today, the highest bid is at $3,0000!  Go to Charity Buzz here to place a bid, and help an important organization for our youth today!

The Gay, Lesbian & Straight Education Network (GLSEN), is the leading national education organization focused on ensuring safe schools for all students. Established in 1990, GLSEN envisions a world in which every child learns to respect and accept all people, regardless of sexual orientation or gender identity/expression. GLSEN seeks to develop school climates where difference is valued for the positive contribution it makes to creating a more vibrant and diverse community. For information on GLSEN’s research, educational resources, public policy advocacy, student organizing programs and educator training initiatives.

Will Polan Be The True Supercouple of REVENGE? And … Who's Zoomin' Who?

Why is “Dancing With the Stars” always discussed on here. I doubt primetime TV blogs give much attention to daytime soaps.