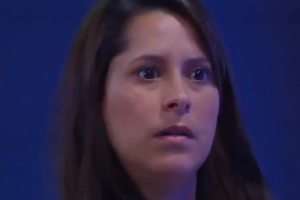 That’ some headline, eh?  Well, it was another, BAM, BAM, BAM, Friday cliffhanger over at General Hospital leaving us breathless for what will happen next!

In a stunning sequence in the last few minutes of the episode, as each of these key scenes were inter-cut and juxtaposed against each other, Nikolas (Tyler Christopher) stumbled upon Robin (Kimberly McCullough) in the lab on Cassadine Island!  The shock on Robin’s face gave us true hope that she finally may get out of captivity! Does the Prince save her?  Meanwhile, just as Robin sees a friendly and familiar face, Patrick (Jason Thompson), after watching the DVD from Robin that she left him a long time ago, urging him to move on with his life, find a woman to love, and be a family again, says to Sabrina (Teresa Castillo), “Marry me!”

And while all that was playing out, Britt (Kelly Thiebaud) finally comes face to face with her psycho father, Faison (Anders Hove) who has baby Ben with him!  Britt had just knocked out her mother, Dr. Obrecht (Kathleen Gati), before finding Faison with her son!  What will happen when the father/daughter showdown begins?

However, the best performance of the entire episode has to go to Kathleen Gati!  For in scenes where she wants to seduce Faison (since she is fixated, obsessed, and longs for the man), he trashes her advances.  In fact, he asks her to wear the “Anna” mask if she truly will do anything for him!  In tears and devastated by his humiliating request, Liesl hauls off and slaps Faison  … damn hard might we add!   She then threatens him that she is now the one with the most power and storms out!   This cannot be good for what could be in store for the real Anna Devane (Finola Hughes)!

We have to give kudos to General Hospital executive producer Frank Valentini, and head writer Ron Carlivati, for having so many characters on Cassadine Island, or about to descend on Cassadine Island (as will be the case with Robert and Anna).  It reminds us of the good old days of classic GH, where everyone got mixed up in the big mystery … somehow!