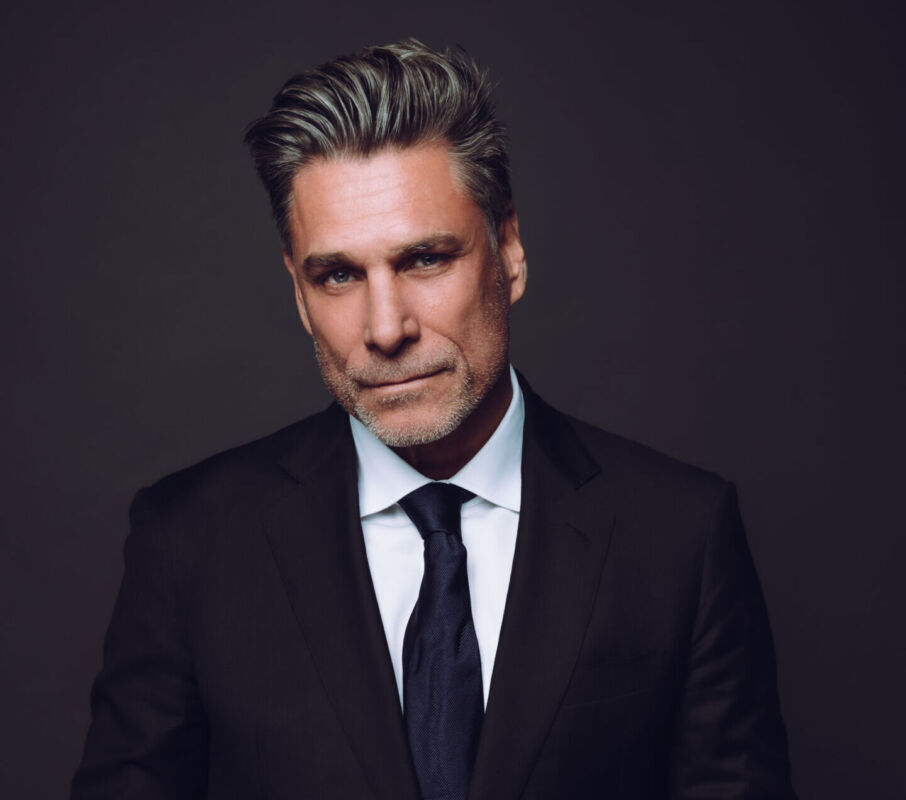 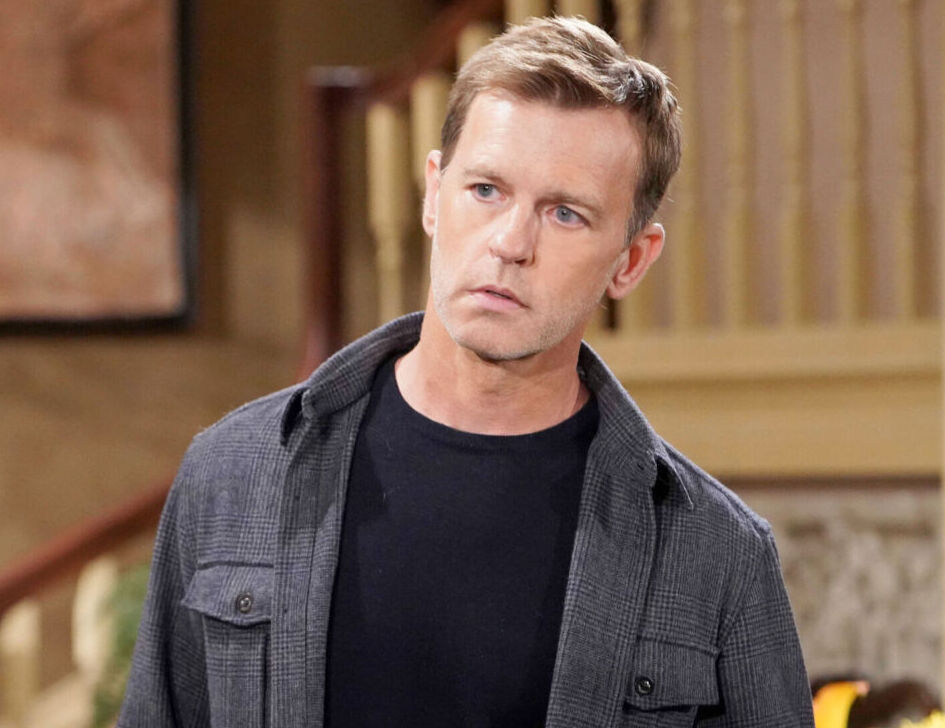 The Young and the Restless has scored a major get by nabbing Trevor St. John to join the cast of the top-rated soap opera, and just in time for the daytime drama’s 50th anniversary season.

If you caught today’s episode, it was revealed that St. John is indeed playing Tucker McCall, the son of the Grand Dame of Genoa City, Katherine Chancellor (the late Jeanne Cooper). The role of Tucker was last played by Days of our Lives’ Stephen Nichols (Steve ‘Patch’ Johnson) from 2010-2013.  Now with Tucker back in town look for fireworks, relationships renewed, new conspirators, and some major plot twists and shifty business maneuvers including his mysterious relationship with Diane Jenkins (Susan Walters). Let’s not forget, Tucker has a past with Ashley Abbott (Eileen Davidson), as well.

Daytime audiences know it has been a decade since Trevor appeared on the network soaps following his memorable performances and star-turn as Todd Manning/Victor Lord Jr. on One Life to Live.  St. John actually debuted in Llanview back in 2003 as “Walker Laurence”, and closed out the ABC version of One Life appearing in the final scene in 2012; when it was revealed that Victor Lord Jr. was very much alive and was being held captive by Allison Perkins.

Later in 2013, Trevor appeared for a short-run on Prospect Park’s reboot of the series.  Since that time, the talented actors has appeared in numerous films and TV series including the CW’s Roswell, New Mexico and Containment.

Michael Fairman TV connected with St. John to get his thoughts on: his new digs in Genoa City, what he thinks of his new role and co-stars thus far, and much more.  Here’s what TSJ had to say below. 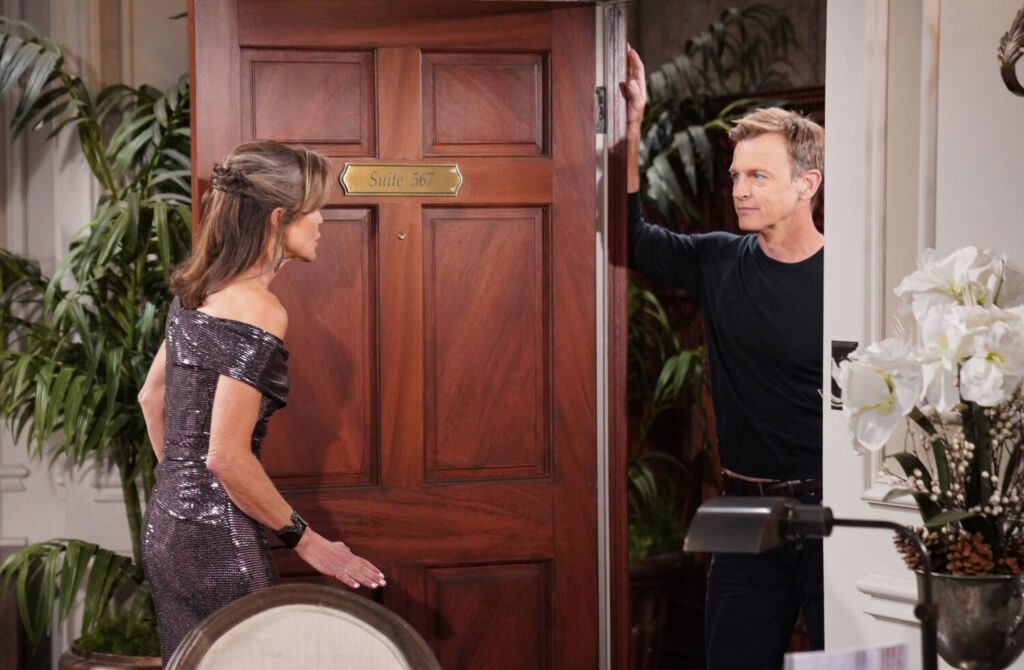 It has now been officially confirmed and revealed on Monday’s airshow, that you are indeed playing Tucker McCall. When Y&R approached you about the role, what did they tell you about the character? Did you do any Google, or You Tube research to connect the dots to any of his past relationships?

TREVOR: The only info they gave me was a broad overview of the relationships Tucker has with the other characters and their history. I didn’t do any research on my own. I’m learning on the job!

How do you view Tucker at this juncture, and from what you’ve been given to play so far in the scripts?

TREVOR: You know, it’s strange, I prefer to never draw any conclusion about a character – my view of him – because the second I do, I’ve limited him/myself, if that makes any sense. I never want to put any unnecessary limits on myself. 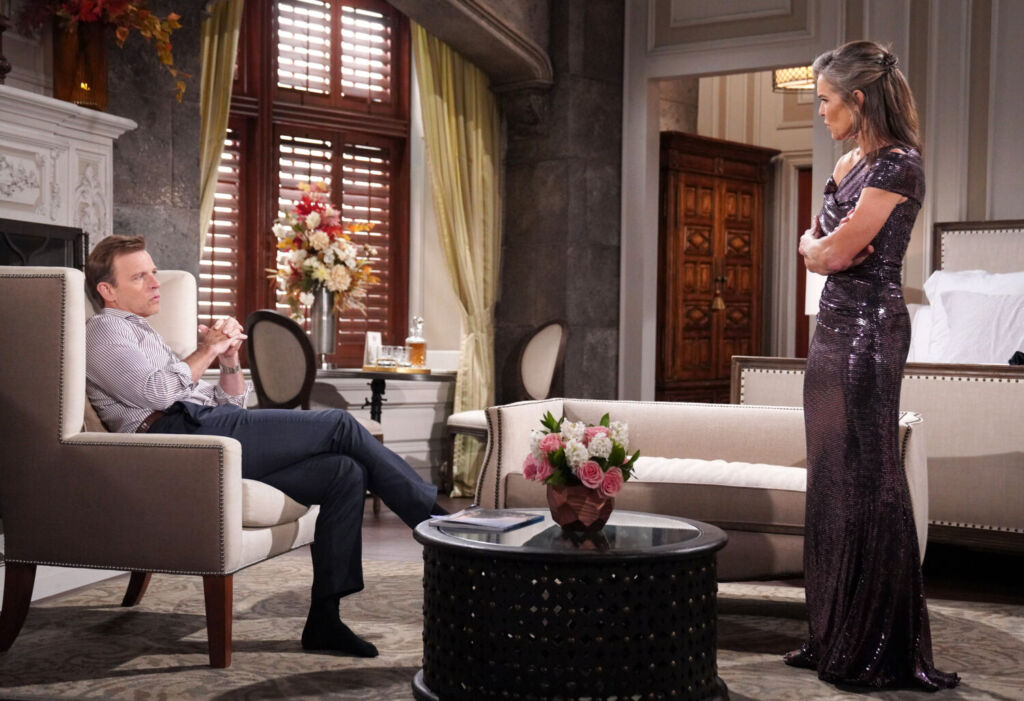 What has it been like for you working with the likes of: Eileen Davidson (Ashley), Susan Walters (Diane) and Bryton James (Devon? Had you crossed paths with any of them previously in your career?

TREVOR: I had not crossed paths with any of them prior to this point. However, I’m enjoying working with each one immensely. Not only are they open and talented actors, they’re good people. 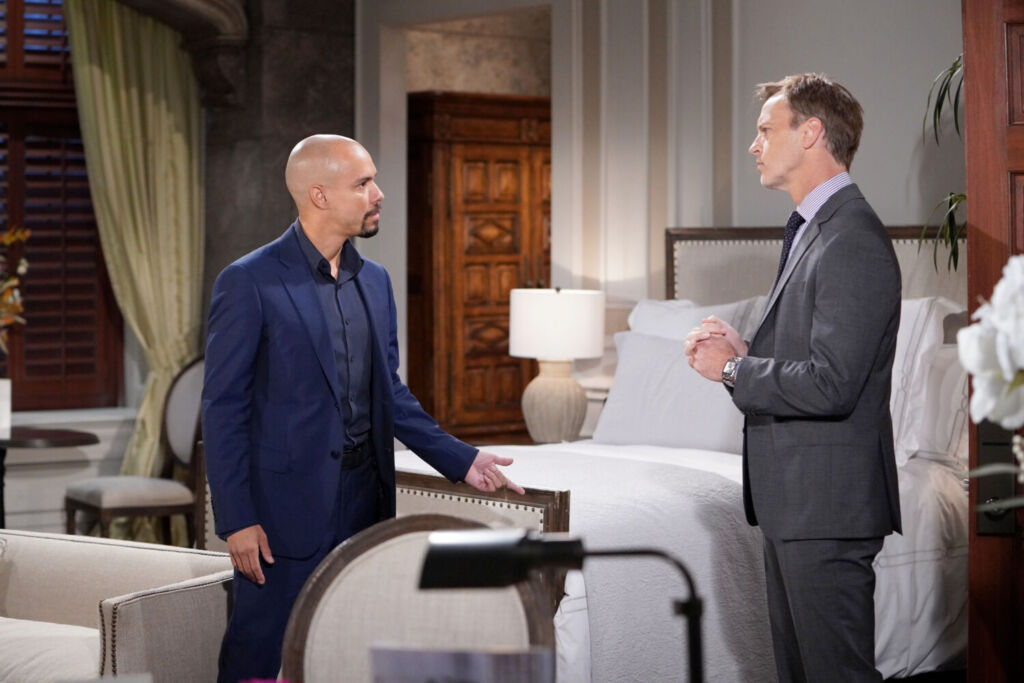 Do you think Tucker will have a difficult time reconnecting with his son, Devon?

TREVOR: Since Tucker has been away from Genoa City, it’s safe to say he has a lot of ground to cover when it comes to re-establishing relationships, most importantly with his son, Devon.  We will also see Tucker form some new alliances as well.

How was it meeting and working with Y&R icon Eric Braeden (Victor) for the first time?

TREVOR: Eric was great. He’s strikes me as a man who knows exactly who he is and has no qualms about it. That’s the kind of person I like to be around – totally genuine and authentically themselves. I hope we get to work together often. 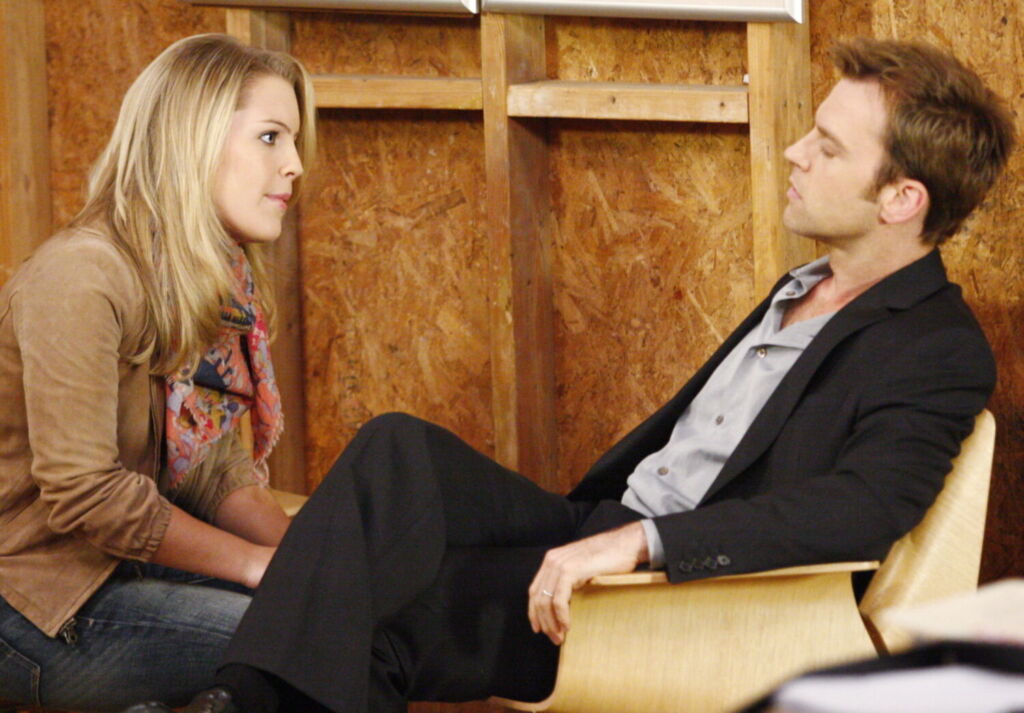 You knew Y&R head writer and Co-EP Josh Griffith from previously working with him.  Did that factor in to your decision to take the part of Tucker and come to Y&R?

TREVOR: Yes, I remember liking Josh as a person and his writing, so that gave me confidence I’d be in good hands on Y&R. 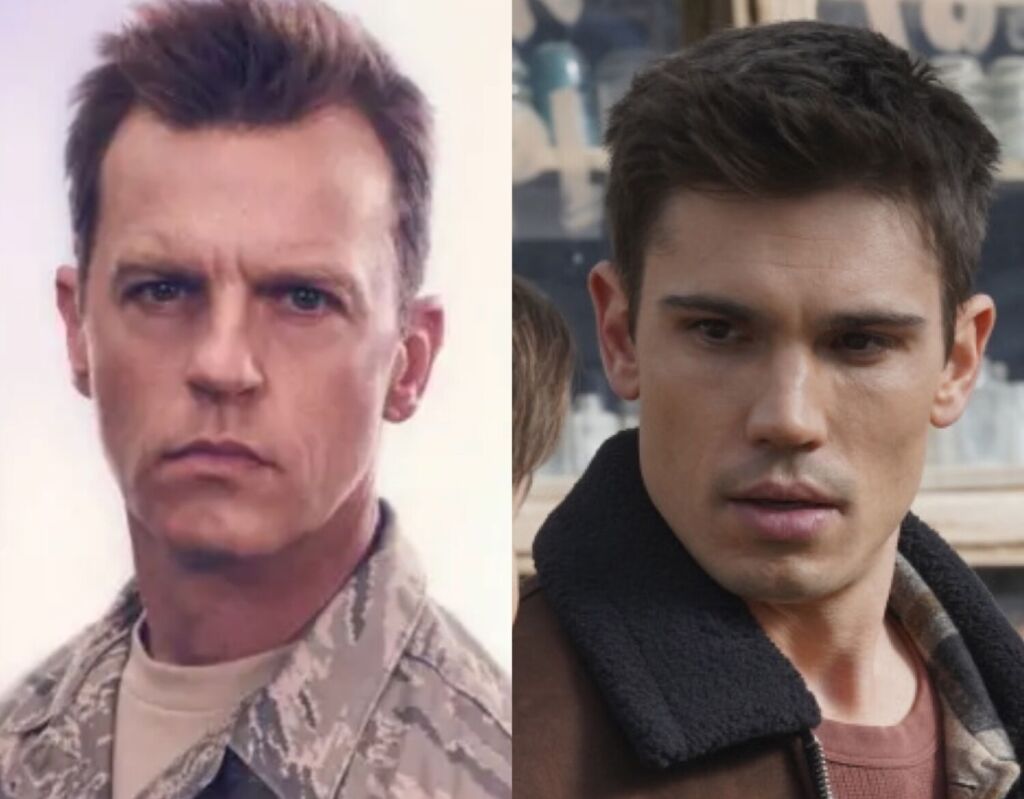 You have appeared in numerous primetime series including Roswell, New Mexico and Containment, plus motion picture roles in The Grief of Others, In the Family, and more.  Do you have a favorite part that you wish you could sink your teeth into again?

TREVOR: I’d love to take another crack at Leo from CONTAINMENT. He was a deeply flawed, confused character, so wouldn’t have to act at all. I could just be myself!

B&B’s Tanner Novlan (Finn) killed your character Jesse Manes in Roswell, New Mexico. Since B&B is across the hall from Y&R, have you yet to run into your ‘killer”?

TREVOR: I have not run into Tanner. Except for that he murdered me, he seemed like a decent chap. 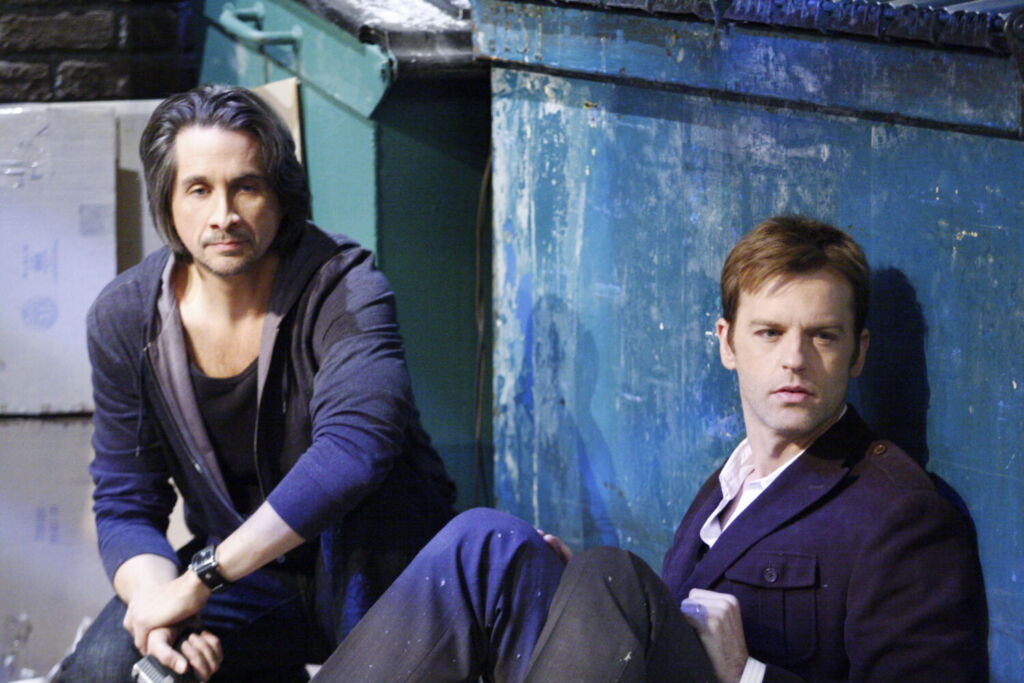 Did your good friend, Michael Easton (ex-OLTL, now GH) offer his thoughts on your return to daytime and Y&R? What does he think about your new role at the show?

TREVOR: Michael told me what he had heard about Y&R – that EPs Tony (Morina) and Josh had created a supportive, positive atmosphere and gathered a terrific cast, director roster, writing staff, and crew that fostered creativity. It turns out what he had heard was spot on. It’s a great group of people, top to bottom. I’m fortunate to be a part of it.

Do you and Michael watch each other’s work?

TREVOR: No, we don’t watch each other’s work. I don’t even watch my own work. 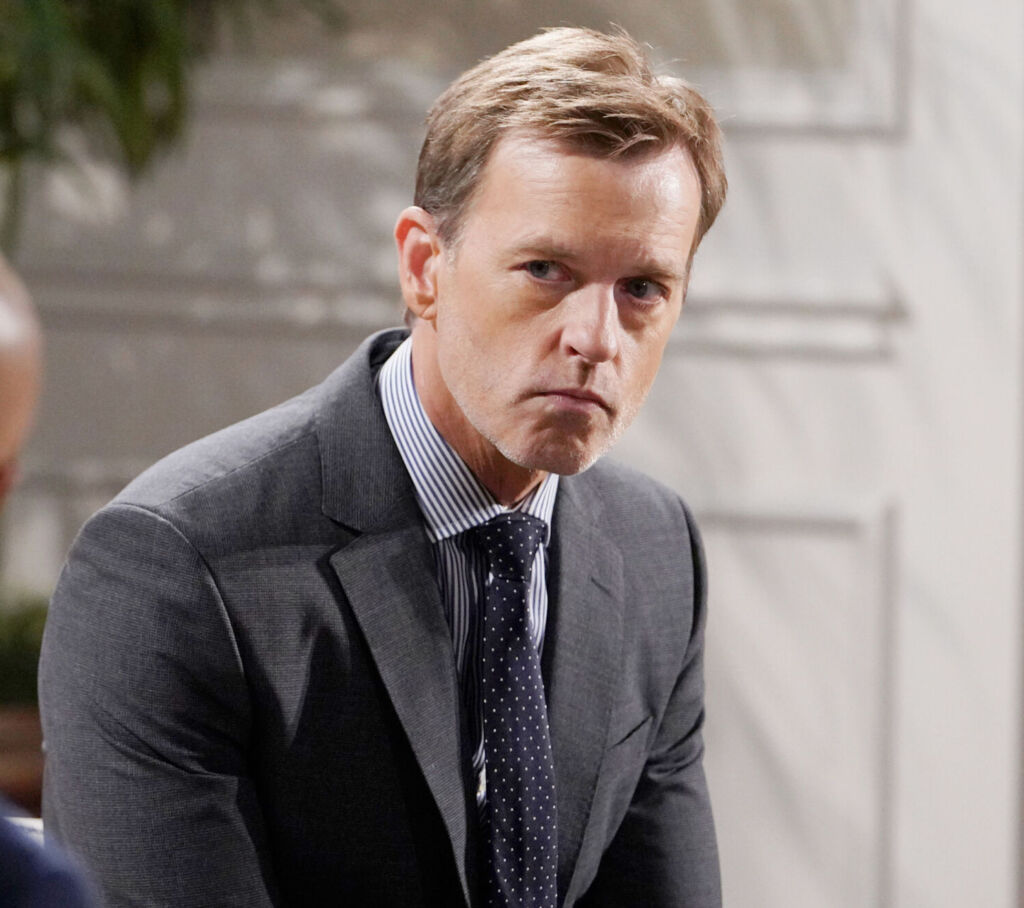 Finally, what could you preview that Y&R viewers should expect, or look forward to from Tucker in the weeks ahead?

TREVOR:  In general, I think you’d better strap in.

So, looking forward to seeing Trevor ‘s take on the role of Tucker McCall? What do you see Tucker becoming romantically involved with? Share your thoughts and first impressions of Trevor on Y&R in the comment section below. 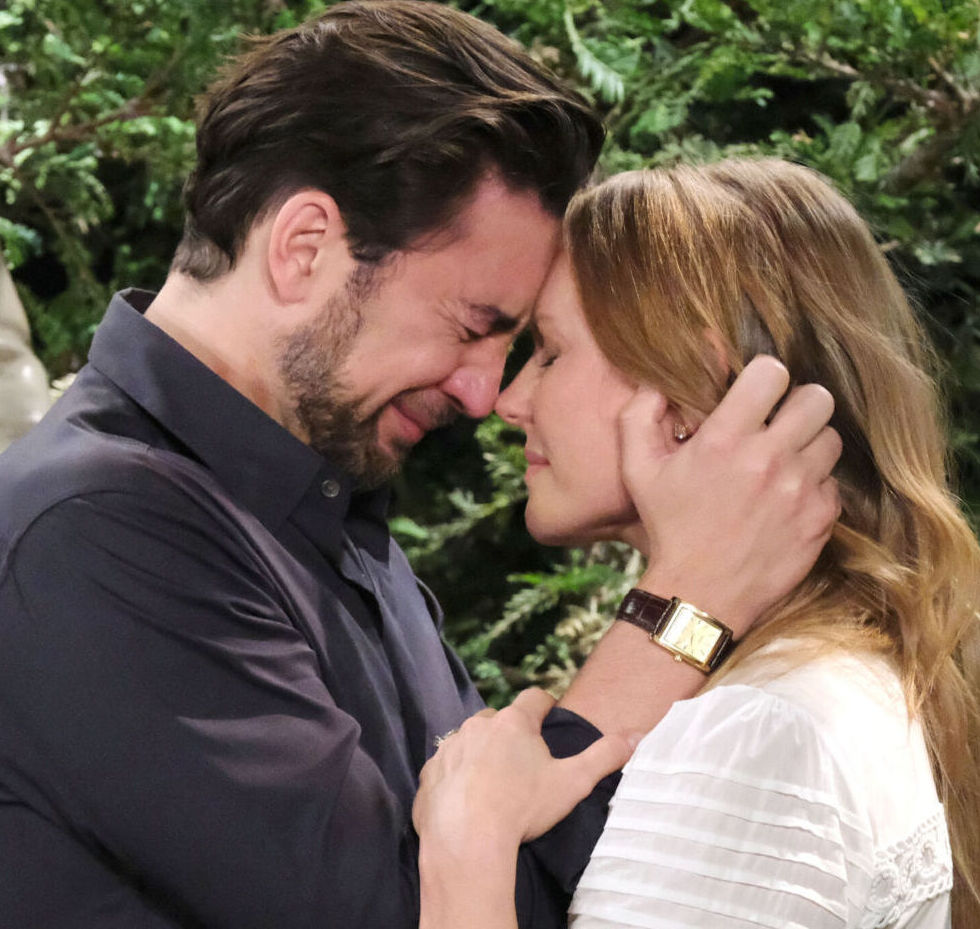 Let’s just start this by saying if you missed last Thursday’s episode of Days of our Lives on Peacock, you missed beautifully touching and effective performances by both Billy Flynn (Chad DiMera) and Marci Miller (ex-Abigail).

Leading up to it, Chad had a gut-wrenching week.  He figured out that Clyde (James Read) was the culprit that murdered his wife and later confronted him.  That led to key scenes where Chad confronts Clyde at Abigail’s gravesite and wants to hear all the gory details of how Clyde stabbed his wife, and then learned how the criminal covered his tracks, went after Sonny (Zach Tinker) and stabbed him, and framed Leo (Greg Rikaart) for the crimes. 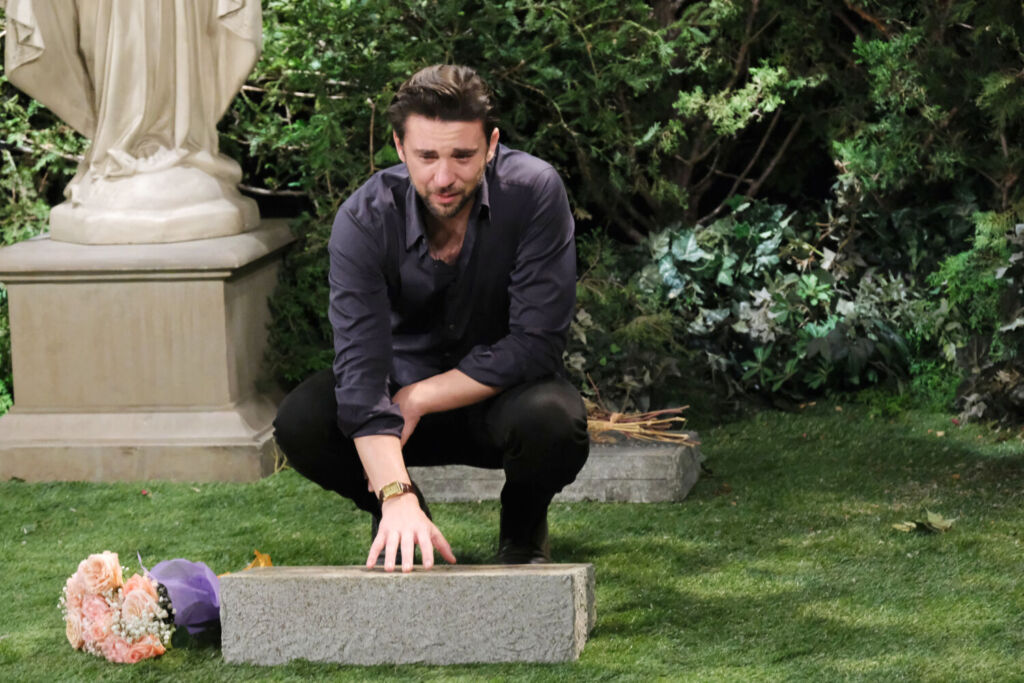 Throughout the reveal, Billy Flynn played all of Chad’s pain and horror, while holding a gun at Clyde baiting him on – problem was Clyde is so despicable he had no problem telling Chad the grisly truth.  During a struggle for the gun with Chad, it is EJ (Dan Feuerriegel) who saves the day and shoots Clyde.  The two brothers bond over their shared disdain for Clyde.

Later at the Salem PD, EJ apologizes to Chad for bringing Clyde into their lives and for what happened to Abigail.  Chad takes it in but does not explode, rather appreciates his brother for saving his life. 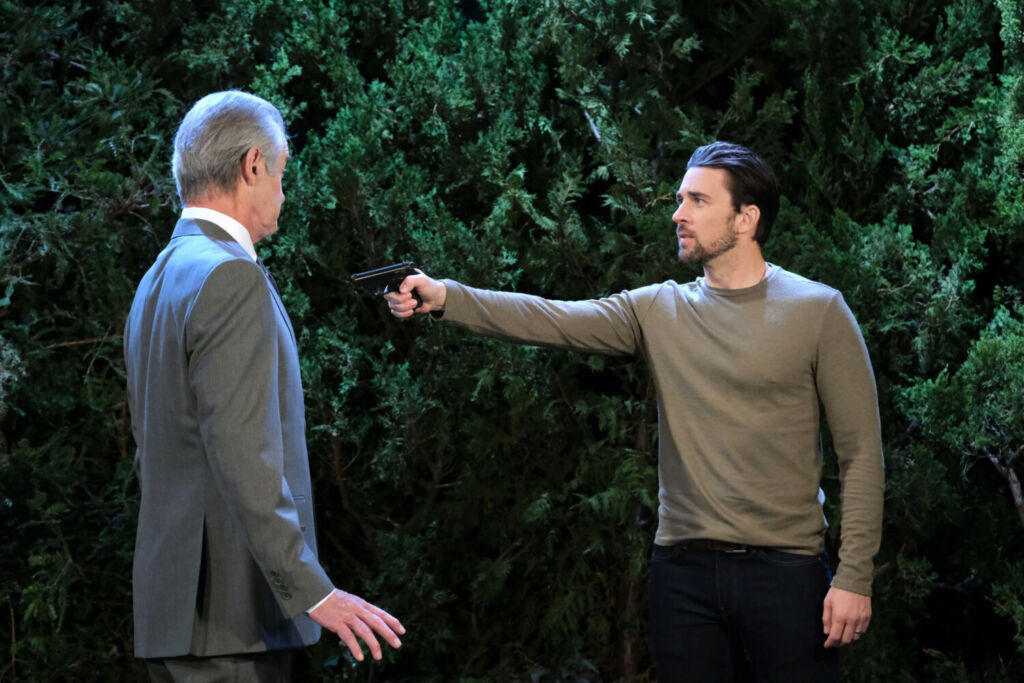 However, the emotional rollercoaster that Chad went through, and the audience, in the expert hands of Flynn, was nothing compared to the heartbreaking scenes where Abigail visits Chad at her gravesite, now that he solved the murder mystery.

Abigail is proud that Chad found her killer and tells him that she wants him to love again and that it’s OK to move on.  She knows he will always love her, and she will always love him.  Then, when Abigail asks Chad to tell her what traits their children, Thomas and Charlotte, possess that remind him of Abigail, it was very tender and not overplayed.  When it was time for their final goodbyes, both Flynn and Miller reminded us all why #Chabby was one of the best duos in DAYS history. 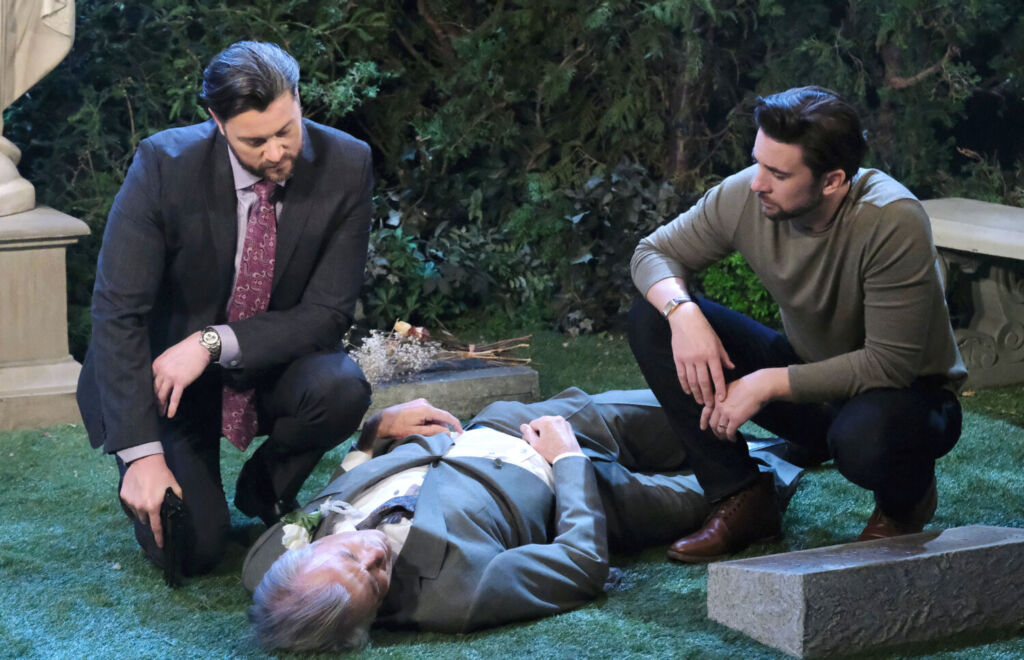 In the end, it was Billy Flynn who carried the ball all the way to the end zone and scored a touchdown in the conclusion of Chad and Abigail’s love story.  It is always a nice to see when DAYS decides to write for and feature material which plays to Flynn’s strengths, and this did. 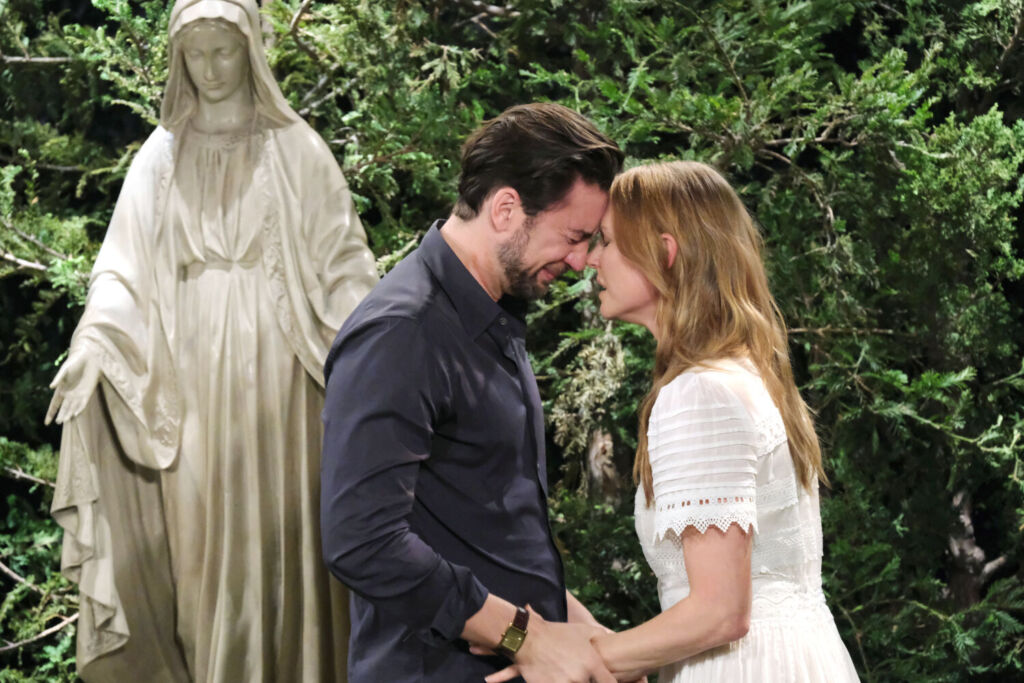 So, for all the reasons stated above, Michael Fairman TV names Billy Flynn’s work as the Power Performance of the Week.

What did you think of the Chad and Abigail goodbye scenes at her gravesite? What did you think of Billy’s performance and the reveal that Clyde Weston was Abigail’s murderer? Share your thoughts in the comment section below.  But first, check out our latest conversation with Billy, and his DAYS co-stars Greg Rikaart and Mary Beth Evans now on the Michael Fairman Channel below, where Billy discusses taping the pivotal scenes and more.