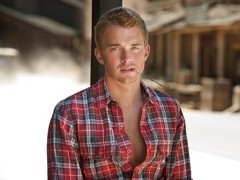 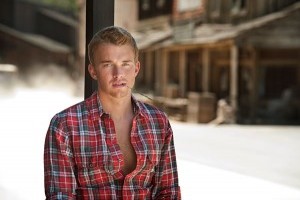 In a brand new feature out today from On-Air On-Soaps Michael Fairman for Frontiers L.A, Days of our Lives Daytime Emmy winning star, Chandler Massey (Will Horton) is front and center stage revealing many sides to him perhaps his fans and DAYS viewers did not know in a piece entitled, Candid Chandler!

The feature is also the cover story for the publications latest issue which hits newsstands tomorrow in the Southern California area.  However, the Frontiers L.A. website is loaded with fantastic new and never-seen-before photos of Chandler from their exclusive photo shoot and the entire article!

From the night Chandler won the Daytime Emmy, to his upcoming budding romance on-screen between Will and Sonny (Freddie Smith), to the intriguing relationship between Will and EJ (James Scott), Chandler gives his thoughts.  In addition, we learn what Chandler likes to do during his time away from the set of the NBC soap, and what a day in his life in Los Angeles is like!   Here are a few excerpts!

Chandler on what he wishes he would have added in his Emmy acceptance speech: “I could have articulated more that I wanted to thank the people who watch and support the story. Accolades are great, but the real award is hearing people say that they related to it, or it moved them. I wish I would have thanked the viewers for that. Who knows? Maybe one day I will get another chance!”

Chandler on the long talked about possible romance between Will and Sonny finally coming to fruition:  “It looks that way. I think it’s going to be something that hopefully the viewers have wanted to see. If I could give them that, that would be great. I am outspoken about how much I like the platonic friendship of Will and Sonny because I thought it was fresh. Regardless of how I feel about that, I am still going to play that to the best of my ability.”

Chandler on the twisted on-screen relationship between EJ and Will, where he reveals it may be coming to a halt: “All good things have to come to an end. I can’t help but hold back a smile, and sometimes I don’t when I work with James Scott (EJ). I think it’s hands-down my favorite relationship that Will has.  How many people aren’t afraid to do whatever it takes to do what they want? That is what makes EJ so attractive to Will.”

Make sure to check out the entire photo spread and feature here! Then let us know your thoughts on Candid Chandler, his Emmy victory for Will’s coming out story,  his thoughts on Will’s relationships with Sonny and EJ, and from reading the article, what you were surprised to find out about this young star!

Eileen Davidson Chats On Her Return To DAYS As Kristen & If Susan Banks Will Follow! – Watch the Video!

I just googled… how old is Chandler Massey? 21 years old. Impressive Portfolio. His character, Will, is acting and/or showing the audience….what he is capable of. for both the actor… his tour de force… acting talent… and totally encompassing… Will’s persona. Will, per se… is involved with the whole canvas… story… of DAYS. You could clearly see why. Congrats! again… on the deserved Accolade… the Emmy WIN. Seriously… how devoted are soap fans…. If I saw Chandler Massey and say… “Johnny Depp”, walking down the street…. it’d be Chandler, i’d say hi and gush about. for all the gush’ing i… Read more »

Love him. Excited they’re going forth with Will and Sonny, though I also hear what Chandler is saying in regards to liking the platonic relationship they have too. In any event, I’ll be watching no matter what. Great interview, Michael.

@Jules. I agree with you and CM. That to pair Will and Sonny… would lessen both their “playing” field. They should be best friends. after all, when someone is “coming” out… truly, a friend was much more important. this would keep open, both actors, the opportunity to stretch their acting chops.

The dude has a great career ahead of him. He has chemistry with everyone!

God he is so hot! Especially with a tan!

Read the article. bummer. I was kinda hopin he’s gay. 🙂

Can’t believe he’s only 21! Great pictures! Love the dynamic between Will and EJ so I hope that’s not ending. Reminds me of relationship between EJ and Stefano.

Chandler has done a great job on Days and totally deserved that Emmy. Shouldn’t be his last one either!

Thursday – 07/26. Just saw the cover of Soap Opera Digest at the grocery store today. “EJ and Will – more than just “friends” ?. Hello. I didn’t have a chance to read the article… This doesn’t surprise me… it kinda crossed my mind… with the Intense storyline… etc…. Just saying…. EJ has that commanding presence that would mow any one under who was caught up in his spell…. animal magnetism…. as it were… and he’s that BIG. then, it crossed my mind… a little too much info…. TMI. Sammi and Will both “in Love” with EJ. having said this…… Read more »

EJ is not gay so that ends the pairup right there. It may be a bromance. SOD and other mags, put things on the cover to get you to buy. Have found that before that they’ll mislead. James Scott does say that EJ is not above using Will’s attraction.

I couldn’t agree with you more… whew! EJ is THE man. wow, i do like your last line… EJ is not above using Will’s attraction. Dag! vulnerabilites…. mode. LOL. Those DiMera’s… I can’t wait for Kristen to waltz, slither, etc… back in to town. i’ve always considered the DiMera’s high brow…. yet, they too, succumb to Stefano’s own machinations… Kristen, EJ, Stefano… a nice recipe to keep my attention.

Friday – 07/27 Carrie and Austin Leave Salem – their last DAY. 07-24. I cried. These two…. “fans”…. were promised hoopla, champagne, intrigue… alas, they’re gone. Carrie and Rafe’s goodbye scenes… were riveting, at best. My reason, (wishing DAYS would) Keep Christie Clark… for Galen’s Rafe. Rafe seemed so natural and comfortable, with someone. Carrie… “knowing you has changed me forever.” “because of YOU… I know what real friendship, and real love is supposed to be.” I bought it. Rafealicious. Austin is at the Brady Pub with Mums Kate. “I’m going to Miss MY mom.” Austin’s oblivious ways and means… Read more »

Thank god Will and EJ might be coming to an end. They are repulsive to watch. About time Will gets involved in a real romance and that it’s going to be with Sonny. Wish Chandler sounded as excited as fans about Will finally getting a romance. Will recently struggled to come out so it would be a failed story to not show him find love since that was supposed to be the original driving force for Will to come out.