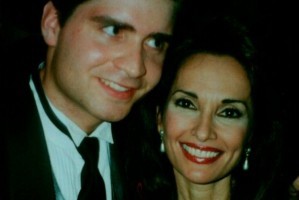 Celebrity escort to the stars, Chris Gaida, has written a new book that is set to hit bookstores at the end of this month on January 31st entitled, Arm Candy!

Fans have often seen these escorts, who walk and assist celebrities through the crowd at the Daytime Emmys, Golden Globes, movie premieres, anywhere there is a red carpet event.  Gaida has had the opportunity to walk with some of the biggest stars in motion picture and television and details it all in his new book!

In Arm Candy, Gaida reveals that he has spent a good deal of time with All My Children icon Susan Lucci, escorting her at the Daytime Emmys and several other events.   The celeb escort to the stars relates that La Lucci is one of his all-time favorite celebrities, and in an excerpt from the book Gaida talks about how gracious Susan really is!  Check it out in this exclusive below!

Gaida on Susan Lucci:  “The thing I discovered about Susan Lucci is that she truly LOVES her fans. Every time I have  escorted her she has gone out of her way to meet them and take pictures. This night was no different. The crowd started to worm around the extensions, walking on the carpet and surrounded us and the other soap stars.  She tried to greet them all and was posing in pictures one after another.  This seemed like it could quickly become dangerous,  so I rushed her along and told fans that we had to keep moving. Of course, many didn’t think I meant those words as they continued to try to get close to her and beg for a quick photo. She was very gracious and wanted to accommodate them, but I insisted that she didn’t have the time to stop anymore. Usually I am very nice with this. I understand the fans’ point of view, however, things were getting out of control.  I get to the party at this point. If she stopped to meet everyone, we would needed to make sure Susan was safe. Besides, I am sure we all wanted to be there for hours.

When we reached the elevators, three hotel security officials  were already positioned there for some added assistance. They had blocked off fans from this elevator bank so only people attending the party or people with rooms, requiring that elevator could enter. There were a few party guests already by the elevator doors anxiously waiting. When the elevator door opened, the people waiting filled the elevator. Just as the door was about to close, one security guard held the doors open and asked everyone to exit the elevator so that Susan, Helmut, our guests and myself would not have to wait. They clearly recognized Susan as a star and wanted to give her their version of VIP treatment.

Horrified at such a request, Susan told those people to do no such thing and she would wait for the next elevator. She thanked security, but told them it was not right. These people were waiting first. The last thing she wanted was for them to be inconvenienced for her. The people did exit and gave up the elevator. Susan was embarrassed and thanked them repeatedly as we entered the elevator quickly. The elevator doors closed with only us in it. We headed to the Penthouse Suite. She was now out of the public eye, so I knew the next moment would confirm what I already knew about her. After about two seconds of silence, she stated she felt bad the security guard asked them to get out for her. She hoped none of those people were in a hurry or upset about the inconvenience. Her publicist and I reassured her they were okay and that everyone knew it was security’s doing, not hers.

This was one of those special, private moments where a celebrity reveals their true identity. I already knew Susan was an incredible human being, but I was still so very proud to be by her side.  Most people would not have said anything or even worried about it, but she cared moments later.”

So soapers, Gaida confirms what many of us know, that Susan is one of the most approachable and considerate stars of them all!  Wouldn’t you agree?  If you have had any encounters with Susan Lucci, share them with us here! And make sure to pick up a copy of Arm Candy to get some more inside scoop on some of the biggest celebs and more on Susan Lucci!

DAYS Casting New Role Of Female Physical Therapist Hiding A Dark Secret – Who Would You Suggest?

I love Susan Lucci! She is the best! By the way, Happy Birthday Michael. I hope you are having a great one.

Susan is very generous..
I wonder if she would lend her escort to me for a day or two..
I would love to be escorted, on his arm , to Target and Walgreen’s 🙂

I hope that she will honor her fans & return to #AMC. If not on contract, at least an appearance every now & then. I know she’s moved on & is busy but I still hope she will give it the old college try.

Agnes Nixon is now with PP and Susan will be there for her most cherished friend Agnes..
We will see Erica in Pine Valley.. 🙂

This book sounds fantastic! I can’t wait to read more.

This is so nice to hear. I hope she comes back to AMC. I quit watching awhile ago, but will check out the new show when it returns.

Great to hear the details from behind the scenes! Can’t wait to read more!

At the Super Soap Weekends in Orlando Florida, Susan was always there for her fans,she always stopped to talk to us.She was always interested and made sure we were having a good time. We would standing by the bathrooms at MGM and wait for her and all the others actors from AMC,OLTL and GH. Everyone was so nice and would take pictures with us and let us take their pictures and Susan and Helmut come over to us and show us pictures and talk us like we were their friends , those were great memories.

I really would love to see Susan on the AMC reboot; it wouldn’t be AMC without her but I am fearful she has two ironclad contracts with Deadly Affairs and Devious Maids I hope people see the value of her on all three shows. At least recurring role but surely someone cna figure something out. I hear her part on Devious Maids isn’t that big so maybe she could handle it – although the other rumour is that she is stealing scenes. Idon’t think she will want to disappoint any fans BUT she isn’t getting younger. And more important maybe… Read more »