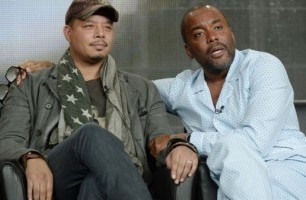 Lee Daniels, the creator of FOX new primetime hit soap opera set in the hip-hop music world, Empire related at the FOX TCA Winter Press Tour conference, that through the depiction of the series lead character Lucious (Terrence Howard) and his relationship with his gay son, Jamal (Jussie Smollett), he  wants to “blow the lid off homophobia” in the African-American community.

The producer-director revealed that his own father’s hostility toward gays frightened him and he knows the same attitudes are being passed on from one generation to another in households around the world.  “What we’re trying to do is to give people the opportunity to see that what they’re doing is painful,” he related to those in attendance during the Empire panel on Saturday.

Viewers have already learned during a flashback that Lucious is shown stuffing Jamal into a garbage can when he sees the boy trying on his mother’s high heels.   Smollett added that he’s been overwhelmed by the response to the story line that he has seen in social media.

RHOBH and Ex-DAYS Lisa Rinna After Seeing Farrah Abraham's Botched Lip Job: "I Apologize For Starting This S—t 26 Years Ago, Please Forgive Me!"

direct and to the point

A brave move, way overdue. I wish this was 30 years ago when many others like me may have benifit tied from positive role models. Better late than never – God bless! Let’s make the show a huge hit!

Love Lee Daniels and admire his strength, courage and devotion to tell stories that are worthy, meaningful and relevant. go Empire!