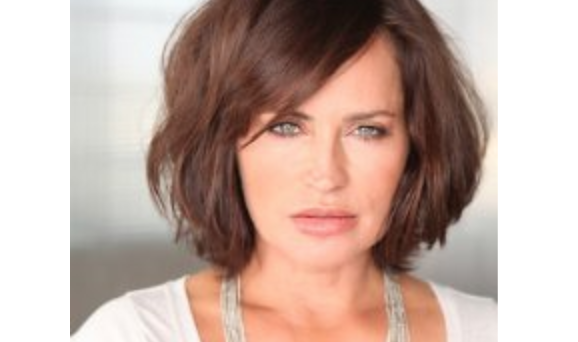 The backdrop of the series is Massachusetts and the world of politics, but there is a lesbian love-story also at the center of it and this time it’s not Chappell who is one of the participants in the romantic love story, but Brown and Minshew!  Crystal plays the mother of Alicia Minshew’s,  and the daughter of a Senator with a lot of secrets that will unravel during the upcoming episodes!

TV Guide Magazine’s Michael Logan spoke with Chappell about the new series and how she has made a success out of showing more romance, more sex for same-sex couples on soaps on the web!   Here is an excerpt below!

Crystal on how it feels to be able to show in more graphic details same-sex love, than once upon a time on Guiding Light during the Otalia days:  “You know what? It feels perfectly natural. What was unnatural is what we went through at GL. It felt like such a lie for Olivia and Natalia not to be able to express their love for each other. To try to tell that story without being able to touch or kiss was crazy. So this is just great! When it comes to LGBTQ issues, things are changing, moving forward, but we still have quite a ways to go. I really believe that projects like Venice and Beacon Hill help make a difference. And I love that we don’t have to deal with any censors, no suits in a tower saying that two women can only kiss on the cheek, or that they can’t look at each other for too long because America can’t handle it. And that freedom makes the work much more authentic. This was Sarah Brown’s first girl kiss, which was very exciting for all of us! After we filmed her first kissing scene, we were all going, “Yaaaaay!” And Sarah is an actress who has no fear. She was all about getting that first kiss out of the way, and then there was no stopping her!”

For more on Beacon Hill the Series visit the shows website here!  Now, what do you think about what Crystal had to say about the progression and what is being able to be shown on the web with same-sex love stories?  Are you intrigued by Beacon Hill?   Let us know!

What Were Your Impressions Of The Season Four Premiere Of Downton Abbey?

Michael Muhney Fans Ban Together To Raise Funds To Fly Banner Over CBS In Protest Of His Dismissal!

I agree with Crystal. While I feel the daytime community is slowly becoming comfortable with same-gender storylines, they’re still not okay with the sexual/affectionate side of those relationships. And web serials help bring that to the forefront; you don’t have the restriction of doing what you want to do. I hope in the future it’s OK for these couples to be seen having sex whenever they like, like heterosexual couples get to do all too often.

Love that this is set in Boston, and cannot wait to see Sarah Joy Brown dominate her acting skills once again!

Having gone through those painful moments of GL with Crystal, I have to say this woman has hit the nail on the head. She sees a very hungry audience who want their life portrayed realistically on the screen. In addition, she recognizes this is a fairly untapped area of possibilities with financial backing to support it. I thank Crystal for her willingness to take on what the shirts thought was “taboo”. I for one will continue to support her as I have since she was originally on Days. You are an incredible woman Crystal.

I love all the work Crystal Chappell is doing for the gays &lesbians. She is a inspiration to all of us. I have watched all of Crystal’s webseries she is so Amazing at everything from producing&director&Acting.

Great interview, i just can’t wait to follow this story. It’s interesting and the cast is awesome.

Thank you for the awesome article ! Crystal Chappell is an amazing actress and a brilliant producer. Her webseries are off the charts. That being said, I’ll follow her anywhere !

Sorry to ask a foolish question, but how can you watch Beacon Hill? I am from Boston and would love to see this. Walk around Beacon Hill many a days. 🙂

I believe it’ll be like Venice. Go to their website (linked in article) and keep with the updates.

I think this sounds good and I love the cast but I’m not a fan of Crystal’s webseries so far. I’ve watched both Venice and The Grove and just found them lacking in story or maybe I’m just not into the story she’s trying to tell, not sure. But I’ll give this one a go if the first episode is free and grabs me. I think at the moment there’s so many free webseries wanting viewers and some are really good so I hope the first episode of Beacon Hill is great.