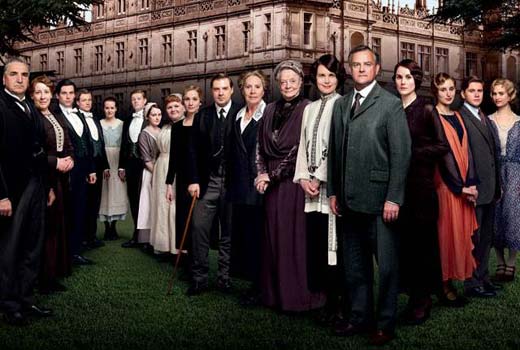 Downton Abbey season four debuted last evening on PBS Masterpiece Classic here in America in a two-hour episode where it seemed much went on with the downstairs crew, and perhaps not as much with the upstairs gang?

When we pick-up it is six months since the shocking death of Matthew Crawley (Dan Stevens).  Lady Mary (Michelle Dockery) has become the steely widow, who showed little emotion and was not in the land of the living!  She even called her baby, little George, a “poor little orphan!”  However, those who care for Mary and witness her wallowing in her grief finally make a major breakthrough, but not before it brought Mary and the viewing audience to tears with some exquisite performances.

Tom Branson (Allen Leech) tries to bring Mary back to life by suggesting she play a more active role in the running of the estate.  But it seems to fall on deaf ears.   You see,  Lord Grantham (Hugh Bonneville) keeps wanting the duties of running the place and keeps saying to everyone that he wanted to protect Mary from dealing with “death duties” because she is just not ready!  However, the Dowager Countess (Maggie Smith) told her son he just wanted sole control of Downton, once again!  And wasn’t Maggie Smith superb when she goes to see Mary and tells her she “loves her”, and tells her she has a choice to join the land of the living … or not?

Later, after Tom fails with Mary, he enlists Mr. Carson (Jim Carter) for help, since Carson and Mary always had a strong connection and friendship.  When he goes to speak to Mary she is a cold as ice.  He leaves her with this statement, “You’re letting yourself be defeated.”   Later after a family dinner gone awry, where Mary storms off from the table, she goes to see Carson and apologizes and breaks down in his arms.   This is the first time we see Mary in tears over losing Matthew!    Next, Lord Grantham finds a letter from Matthew written before his season three trip to Scotland where he names Mary as the sole heiress to his fortune.  After wanting to hide it, he does come forth with it and tells Mary, and once again she cries in beautiful performance by Michelle Dockery!

Lady Edith (Laura Carmichael) is certainly getting out and about these days now meeting up  with Michael Gregson, who wants her to move to Germany with him so he can get out of his marriage!  Edith invites Gregson to meet the “fam” at Downton!  We shall see how that goes!

One of the other major side story involved Mr. Carson , Isobel (Penelope Wilton) and Mrs. Hughes (Phyllis Logan)…. Isobel is still grieving the loss of her son Matthew.  So Mrs. Hughes decides to help out Mr. Carson’s old theatre friend who fell on terrible bad times … who wrote a letter to Carson … which Carson threw in the trash … that was retrieved by Mrs. Hughes … that is how she knew all about this!

Mrs. Hughes brings Mr. Grigg to stay at Mrs.  Crawley’s to give her purpose in helping someone else while she is still grieving the loss of her son, and to have her in essence … come back to life!   After getting Mr. Grigg better he prepares to leave for his job at the Opera House in Belfast.  Grigg was leaving on a train and Mr. Carson shows up… finally!  The two men have the long awaited conversation!  We learn that in their younger years, Alice, a woman Mr. Carson had feelings for, chose Mr. Grigg over him. Their marriage was loveless.  Grigg revealed she should have picked Mr. Carson.   As the train was about to leave the station, the two men shook hands and parted as friends.  And of course, in the touching ending … Mrs. Hughes walked off by Mr. Carson’s side.  When will these two admit they have feelings for each other?  Ever?

In addition, there was Lady Rose (Lily James) stepping out dancing which turned into a disaster at first, but may have brought her a new beau in her life!  Anna (Joanne Froggart) and Bates (Brendan Coyle) looking like they are being set-up for more trouble by the recently brought back Edna and conniving Thomas Barrow ( Rob James-Collier), and there was a very heartbreaking story involving the financial struggles of Mr. Moseley (Kevin Doyle) and more!

So, do you give the season four premiere of Downton Abbey a thumbs up? Or, a thumbs down?  What was your favorite part in the episode?  Did you need the hankies?  Let us know!

Im a first time viewer…and i enjoyed it!!!

I will not give any spoilers since I viewed the entire season…. but as a whole, this season has a lot of very humorous wit. It is so very good. Loved every minute. A big bonus is Shirley Maclaine’s return in the “Christmas day” episode, which in the U.S. is the season’s finale.

There was a lot of story to follow. Was Cora always so thick headed? Will Robert never learn? He can’t handle the estate and the money! Is the Dowager turning over a new leaf? Will Mr. Moseley ever come out on top? Bates and Anna had better look out – they’re loved by many but not by all. Michelle Dockery and Penelope Wilton soared last night.

Love this show and glad it is back on the airwaves.

Sounds good. I have yet to watch the ep.

At first it seemed rather slow and not up to previous seasons but as the story developed I was completely engaged and enjoying and it lived up to my high expectations. There is a lovely dynamic between Tom and Mary.