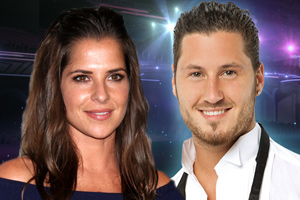 We finally know who General Hospital favorite Kelly Monaco (Sam) will be hitting the ballroom floor with when the Dancing with the Stars All-Stars Edition competition begins on ABC on September 24th!

As On-Air On-Soaps readers know, Monaco revealed to us in our recent interview that she did not want to tip the scales as to put our her preferences publicly for a partner.  However, today on Good Morning America the DWTS All-Star pairings were announced to the American public for the first time!

And so for Monaco,  she was paired with Val Chmerkovskiy, the younger brother of Maksim Chmerkovskiy.  Maksim got teamed with Kirstie Alley! Now here are the other pairings for the couple that could win the biggest battle ever for the Mirror Ball Trophy!  Dancing together will be:  Emmitt Smith and Cheryl Burke, Joey Fatone and Kym Johnson, Melissa Rycroft and Tony Dovolani, Bristol Palin and Mark Ballas,  Apolo Anton Ohno and Karina Smirnoff,  Helio Castroneves and Chelsie Hightower, Shawn Johnson and Derek Hough, Pamela Anderson and Tristan MacManus.

One more dancer will be paired with the “Viewers Choice” winner where fans will determine who the final All-Star cast member will be.  The three celebrities vying to fill the 13th spot on the cast are Sabrina Bryan, Carson Kressley and Kyle Massey.  Fans can vote for their favorite “Viewers’ Choice: All-Star” until Friday, August 24 at 12:00 p.m., PT, to determine which of the three celebrities will be named the final All-Star contestant. Once voting has closed, the final cast member and his/her professional dance partner will be announced live on Good Morning America on Monday, August 27.

So Kelly Monaco fans, what do you think of the selection of her partner Val?  Do you think on paper the duo could have the winning spark and combo?  Let us know your thoughts! And don’t forget to tune-in and vote for Kelly throughout the competition! And after the jump, watch the announcement of the dance pairings on GMA!

Not watching anything but GH on ABc.Hope Kelly wins but not voting because it counts as veiwers as we found an article on how voting works and helps ABC raise there prices on advertisng.

I just groaned when I heard Bristol was counted in as a “all-star” or champion… really did not enjoy any evening she was dancing, if you can call it dancing. What she excelled in was getting call in votes I would think because of who her mom is, not because she was a great dancer, which is how I and many others vote. I wish when it’s closer to the end that the judges points counted more than call in votes to weed out the chance that someone who is a great dancer gets voted out simply because someone else… Read more »