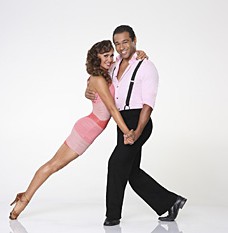 Last night on the second week of competition for season 17 of  ABC”s Dancing with the Stars, it was One Life to Live and High School Musical  Star, Corbin Bleu and his dance partner Karina Smirnoff,  who wowed the judges most scoring a 26 out of 30 for their Jive which Bleu performed as an homage to his High School Musical days.

With leaps, athleticism, and dance movements, they were the couple to beat. The only awkward moment came when Bleu, before the judges gave their scores, said to DWTS host Tom Bergeron,  “I have to do something for myself for a moment.”   He then shouted to the audience,”What team? What team? Wildcats!”  Obviously, another nod to High School Musical.  However, if you never saw the movie, you would have no idea what came over him!

Now on to Pretty Little Liars and Days of our Lives guest star, Brant Daugherty and his dance partner Peta Murgatroyd, The sexy couple danced the Rumba!  While their chemistry is palpable, the judges seemed to criticize some of the movement, and may have felt it was more smoke in mirrors, without really saying it.  To us, it looked pretty damn good!  Brant and Peta scored a 23.

As we reported last week, our pick to be booted off this week in the first elimination was ESPN commentator Keyshawn Johnson, and the dancing Gods were with us, because at the end of the night …he was the first to be given the boot!  Leaving Bill Nye and Bill Engvall, the next gents that should go, although with Bill Nye receiving so much fan support, he could get through for weeks on end!

In the “hankie” moment of the evening, that was provided by Valerie Harper’s dance partner, Tristan MacManus, who while in rehearsal was overcome to tears watching Valerie give it her all and try to learn the steps in their Paso Doble!  Harper had injured her knee last week and is battling terminal cancer.

Other’s who impressed:  Jack Osbourne, who was so hard on himself and self-depreciating in rehearsals, did a more than admirable job with the the Rumba with partner Cheryl Burke.  While Leah Ramini, who performed a Samba with Tony Dovolani,  finally publicly said something about her struggle with leaving the Church of Scientology citing it as both a motivation and a distraction for signing on to Dancing With the Stars during her rehearsal segment.  Jack and Cheryl and Leah and Tony both scored a 24 from the judges.

So who do you think had the best dance of the night?  You can watch Corbin and Brant’s performances below!  Who do you think should get booted off next week? Let us know!

Bill Nye will go on for a bit longer– he’s so darn lovable it would be like voting off your grandpa. He dances badly but when you watch him you know it his heart he is dancing like Fred Astaire — so I hope he stays for a bit longer just to watch his joy. Both Corbin and Brant are doing well, dancing with former mirror ball winners, so they have a good shot at the title. Valerie is an inspiration— and that moment with Tristan was so sweet– just proves true beauty lies in our souls not in our… Read more »