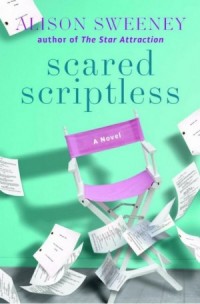 The multi-talented Alison Sweeney (Sami) is one of the busies people in Hollywood as we know! From her regular leading role on NBC’s Days of our Lives, host of the reality competition series, Biggest Loser, as an author, and more, Alison juggles her career in tinseltown with being a real-life mom.

Today, Alison revealed via Twitter the book cover her highly anticipated new novel entitled, Scared Scriptless!   The actress put it out to her followers stating: ” Just in – my book cover! So excited 2 share with you!! like it?”  As for the details on the book it is due out in bookstore on June 3, 2014,but available for pre-order now at barnesand noble.com!

So what is the book about?  Read here for the juicy storyline:  “Maddy Carson loves her job as a Script Supervisor on the hit show, The Wrong Doctor, as much as she loathes fake boobs, juice cleanses, oversized designer sunglasses, and all other things “Hollywood.”  Super-organized and down-to-earth, Maddy has maintained a strict dating rule throughout her ten years in L.A.: “No Actors!” But she is seeing someone in the industry, Craig, one of the Executive Producers for the show… and technically her boss.

When Maddy regales Craig with stories of Wolf County, her beloved hometown in the Sierra Nevada Mountains, he’s intrigued. He convinces her that a reality show featuring the eccentric characters of the charming ski town could be great for the production company (not to mention a hit that could help his career).

Given that her parents and her community are facing serious financial challenges, a show that could drive tourism and boost the economy may be just the saving grace they need.  Maddy and Craig visit Wolf County, where she uses her personal connections to recruit people for the show and to get footage for a sizzle reel to pitch to networks. Indeed, the lively characters and beautiful backdrop make for terrific material. But back in L.A., Maddy learns that Craig has his own agenda, and their creative vision’s clash. Now Maddy has to stop Craig, whatever it takes.

Meanwhile, Maddy has an unexpected flirtation with The Wrong Doctor‘s newest cast member, Adam Devlin. When things begin to fall apart with Craig, she decides to give Adam a chance-but is she suited for dating a hugely popular actor with throngs of female fans who follow him everywhere and even leave their panties tucked into his windshield? When it comes to life and love, Maddy has to learn that sometimes it’s more important to break all her self-imposed rules and simply follow her heart.

Mimicking the five-act script of a television show, Scared Scriptless is a love letter to TV, and offers a fascinating behind-the-scenes look for fans of both reality and scripted television – worlds that Alison Sweeney knows intimately.”

This sounds like the perfect vehicle for Sweeney to share her experience in both television genres with her fans!  What do you think of the book cover for Scared Scriptless? And does the story intrigue you?  Let us know!

NASHVILLE Returns Tonight! Who Will Live? Who Will Die? – Watch The Promo!

Love the cover and the title. I haven’t read Ms. Sweeney’s other novel. Think I’ll give them a try. Very talented lady. Congrats and continued success in all your endeavors.

AS is my favorite soap lead actress. She is extremely beautiful, stunningly sensational, and a talented artist. It’s great that she is talented as a writer as well.

Congrats to Ali Sweeney, she is one of the hardest working women in daytime tv! I LOVE her on Days! I hope they begin to do more with Sami’s character; she is too good an actress for them to minimize her role as they have been doing lately. Gotta’ get this book.

I can not wait to read the book!