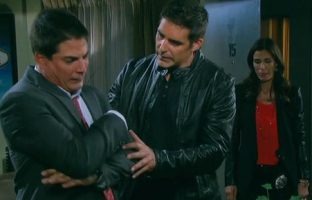 If you ever needed to reach for the hankies watching your favorite daytime drama, look no further than Monday’s episode of NBC’s Days of our Lives.

The series picked-up their unimaginable Friday cliffhanger with Gabi (Camila Banus) finding the strangled Will (Guy Wilson) dead on his apartment floor.  As the episode unfolded, key characters including: family members, loved ones, friends, and Will’s husband, Sonny (Freddie Smith) all learned of Will’s demise.

Gabi called her brother Rafe (Galen Gering) first, who comes to the crime scene.  Rafe is later followed by Hope (Kristian Alfonso).  And in very touching performances by both Galen Gering and Kristian Alfonso, the two cops try valiantly to hold it together, but can’t as they struggle to come to terms with the murder of the beloved Will.   Hope than decides she will be the one to call Will’s father, Lucas (Bryan Dattilo), and break the news to him.  She urges Lucas to get to Will’s apartment right away.   When he does, Lucas is beyond griefstricken in a heartbreaking performance by Bryan Dattilo.  When he calls Will, “My boy!” … major hankies were needed.  Lucas is then the one who has to tell the devastating news to Sami (Alison Sweeney) – Will’s mother.

Will’s grandmother Marlena (Deidre Hall), who has always been by Will’s side through his coming out, and supported him emotionally can barely hold it together when she learns of the news.

Marlena interuppts John (Drake Hogestyn) and Steve (Stephen Nichols) conversation, while they are talking about Bo’s (Peter Reckell) whearabouts, to tell them what happened and is shell-shocked. In Paris, Sonny (Freddie Smith) hears Will’s voice message where Will finally says to Sonny that everything that happened was his fault, and he loves Sonny so much.  Sonny decides he is going to head back to Salem and see Will and try to make his marriage work.  But he is stopped by a tragic phone call from his Uncle Victor (John Aniston).   Sonny learns Will has been murdered and crumbles to the floor.  Back in Salem, Abigail (Kate Mansi) while in bed with her fiance’  … killer Ben (Rob Scott Wilson) … reels when her mother calls her to tell her the shocking news of her cousin’s murder.  Ben tries to say that Chad (Billy Flynn) struck again, and murdered poor Will!

Abby goes to meet Gabi who is with her little girl Arianna trying to process Will’s murder, and how on earth she is going to tell the baby girl her daddy is gone! Will’s dear friend, Chad (while hiding out in the DiMera mansion) learns via computer that Will had been murdered by the necktie serial killer! Chad is griefstricken, and then is desperately trying to piece together three murders and who could be framing him.  And he does!  He realizes it’s Ben! And at the end of the episode, he confront the killer! Finally, as Marlena, Lucas , Rafe, John, and Hope have gathered at the Salem PD, in comes Sami who has arrived in Salem looking emotionless and shattered, and goes to her mother for her a very sad hug.

Major kudos have to go to the performance of the cast of Days of our Lives for this one:  In particular the men: Bryan Dattilo, Galen Gering and Freddie Smith really broke our hearts, and the ladies: Kristian Alfonso, Deidre Hall, Camila Banus, Kate Mansi all played their reactions spot on in this most saddest of episodes for long time Will Horton and WilSon fans.

So, did you need to reach for the hankies during Monday’s DAYS?  Which performance was a stand-out to you? Did you  how the residents of Salem found out about the death of Will?   Even though, the series killed off this legacy and important character of Will Horton, do you think it provides DAYS with long term story, or just a short term temporary shocker?  Share your thoughts in the comment section below, as the sadness continues all week long in Salem.

Susan Lucci To Lend Her Voice On Tonight's Episode Of BEST TIME EVER With Neil Patrick Harris!

GH's Richard Burgi Dishes On The Treachery Of Paul Hornsby, His Co-Stars & Returning To Daytime!