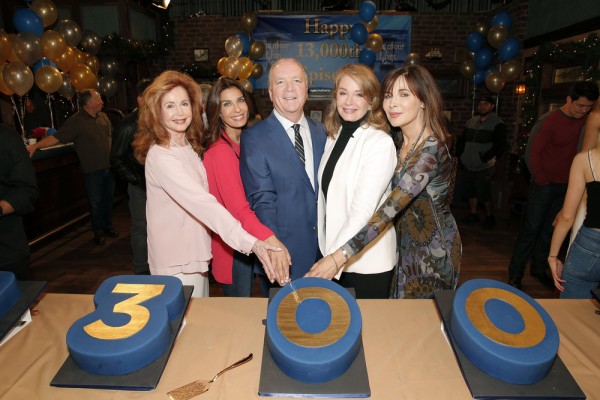 Tuesday was a momentous occasion for NBC’s Days of our Lives and its longtime executive producer Ken Corday.  The series is celebrating this week the taping of its 13,000th episode.

During an on-set celebration today attended by many cast members and creatives, Glamour.com spoke with the EP and got his thoughts on a myriad of subjects related to the soap now in its 51st year and this latest milestone.

When asked about several fan favorites returning later this year on-screen including: Charles Shaughnessy and Patsy Pease as Shane and Kimberly, and Leann Hunley as Anna, Corday responded:  “They don’t start airing until after Christmas. We are really way, way ahead, and we’re going to try and get closer to air time, but we do eight shows a week, so… I’m thrilled, but especially those two did not miss a beat walking on the stage. It was like they never left. Charlie had been gone longer than Patsy because she has made a few appearances at weddings, funerals, bar mitzvahs, etc. Charlie’s transition was seamless. It’s a good story. It’s interwoven with Hope’s story, and it’s great. There are more surprise returns from the past to come. Leann Hunley (Anna) will be back in Salem (as well). “

When asked about the status of Drake Hogestyn, who has been reportedly sidelined by an injury from a fall during a freak accident back in May, and has not been shooting new episodes, Corday confirmed it stating: “We wish Drake the best and hope to see him back on set soon.”

When teasing what upcoming storylines Corday is most excited for fans to see, the EP related:  “There are two: the one with Chad and Abigail and JJ and Gabi. They are very vibrant and good actors, the young future of the show. I’m very excited about the story Nicole will have coming up with Chloe and Deimos and with Brady and another huge return from the past. Again, a big surprise, and a great part of Nicole’s past and life experience in Salem. It’s a baby story, and those seem to work well for us.”

Peter Reckell To Return To The Cast Of The Fantasticks After 35 Years!

Oh, My Gosh darned IT

Leann Hunley the beautiful is back

as I’ve posted before… wouldn’t it be great to see Anna DiMera and Eve Donovan as besties… better yet… as Anna sister !!!!!

I love Anna & am thrilled she’s coming back! Now if we could just get Tony to “come alive” again, that would be perfect. Happy to see Shane, too, but I hope PP tones down her overacting. I’d really prefer her not to return.

Tont is due to come back to life because just like his father Stefano, he also has the Phoenix’ capabilities to rise from the dead.

The secrecy surrounding Drake’s accident and recovery status is scaring me! I hope he’s alright. I’ve heard conflicting reports of his accident and all his costars are tight lipped, which tells me he is/was possibly in critical condition.

I hope he is ok too…meanwhile, the return of Anna ect has renewed my interest in the show…so im sticking with it for now!!!

Yeah that was a strange response from Ken. I didn’t know the other actors are tight lipped. I hope Drake is doing great.

I hope Drake is okay. I think that other cast members are respecting his privacy by saying nothing.

It only takes a couple words from one person, mary, without compromising/disrespecting his privacy…”He’s OK” is all that’s needed.

It sounds promising. I hope #Days is looking for some writing talent in Nashville and not just acting talent. Great folks here that were working on Nashville. Some awesome are nor being retained by new regime. Folks are loyal to #Days in Nashville. A lot is happening in the city..and not just production of CMT ‘ s Nashville prime time show. I am sure that folks will turn out for a 13,000 episode celebration. It is the perfect time to come. Zsouthern Living Publishing is celebrating its 50th anniversary in Nashville in September. They are based in Birmingham, AL. Built… Read more »

Sooooo excited!! Love Leann. She is such a great actress!!!

I really hope they can turn this show around, it’s worrying seeing the ratings constantly tumbling.

I really hope that the rumors of Will’s return are true, we need him.

I love Kassie DePaiva and would love to see her full time; but, as excellent as she is, she can’t carry the entire show by herself. I don’t find any of the current story lines interesting. I was very excited about the return of Daniel Cosgrove; but, they have paired Aiden with that cartoon character villain and I find it boring. The missing Abigail should be interesting but the writing dropped the ball. I pray they aren’t going to try to make an item of Chad and that pitiful young woman playing Ciara. Billy Flynn is very good; but he… Read more »

What a Twinkie-munch interview. I wish someone actually had the guts to publicly call out Ken Corday over how exactly he has allowed this show to become such a totally unwatchable trainwreck. Memo to Ken: Take a good look at the recent numbers, which translate to cancellation if things don’t turn around in a hurry. He has proven time and time again just how out of touch he is with what fans/viewers want to see, and he lies over and over again. It’s very sad to see how far this show has fallen in such a short time. It used… Read more »

I certainly DO NOT want a cancellation any time soon

EXACTLY Pat. Not only that what a cavalier way to talk about Patsy Pease. .bar mitzvahs and weddings..dope. .people like baby stories. .uhhh nor really Teddy..people would like you to come out of the SIXTIES. .he’s going to tank his parents show into cancelation. .someone needs to wise up and release him on the strength of that interview alone. .you CANNOT keep recycling the same stories with the same characters. This is no REBOOT..none of them ever really were. .you have pre raped yourselves into oblivion and by Christmas your casting sinus WON’T help.

A return by Kassie DePaiva would be great but I think it would take a return by Chandler Massey to make the ratings move.

Sadly none of this makes me want to watch Days again. Ken constantly drops the ball, he’s a mess.