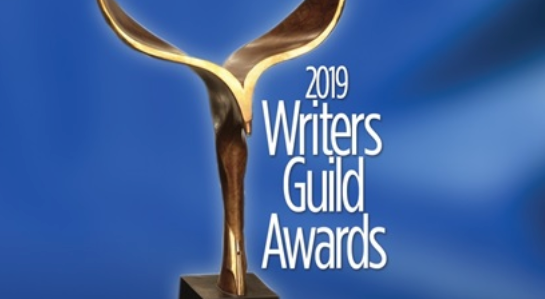 The nominations have been announced for the 2019 Writer’s Guild Awards for outstanding achievement in television, new media, news, radio/audio, and promotional writing during 2018.

Winners will be honored at the 2019 Writers Guild Awards on Sunday, February 17, 2019, at concurrent ceremonies in New York City and Los Angeles.

In the Daytime Drama category for writing, two soaps will face-off for the prize; NBC’s Days of our Livers and ABC’s General Hospital.  Here are the official nominated head writers and their teams.

So, who are you rooting for to take the WGA Award; Days or GH? Comment below.

76th Golden Globe Nominations: ‘The Assassination Of Gianni Versace’ Scores 4; ‘This Is Us’ Snubbed

if gh wins and it probably will it is a joke

GENERAL HOSPITAL ALL THE WAY!!!!

I have not watched Days of our Lives (never had the time)
but-
I know Ron Carlivati’s writing, he’s a brave/bold writer.
As for Shelly Altman, she has always been
stale/lackluster.

Days of our Lives deserves the win, hands-down.

(GH has no bragging rights, for sure)

I HOPE GENERAL HOSPITAL WINS BUT I QUIT WATCHING ALL AWARDS SHOWS WHEN IT SEEMED LIKE DEMONS WERE ON STAGE. THEY CURSED JESUS & GOD.THEY ALSO USED THE TIME TO MOCK TRUMP. COUNTRY MUSIC AWARDS WERE THE ONLY ONE NOT TO TELL HALF OF THEIR FANS TO GO TO HELL. SO CMT AWARDS GET AN A & THE REST AN F. THIS FROM A USED TO BE FAN OF HOLLYWOOD. BETTY WHITE WAS THE ONLY ACTRESS WITH DIGNITY.

Thanks! That’s the best laugh we have had here in Hell all week!

JUST REMEMBER LAUGH NOW BUT JESUS WILL WIN IN THEN END & YOU & the rest of your demons will burn forever. if you don’t believe i will pray for you cause u will lose so bad. u have my pity.

Edna, Edna, Edna, I have never seen you here before. I’m sorry, in advance, to disappoint you, but I must speak up for Satan in this case. Is it really necessary for you to interject “JESUS AND GOD” into this Discussion? Is it really necessary for you to offer your phony “i will pray for you” while at the same time wishing upon someone to “burn forever” and “lose so bad?” If you were really one to follow Christ’s teachings, you wouldn’t be spouting this venom, nor would you choose to defend the current president who is about as far… Read more »

“Days of Our Livers”. That’s the best laugh I’ve had in a week!

I’m rooting for Days of our Lives (not Livers).

I hope Days wins it the most exciting show on.Far from being boring like some shows are.