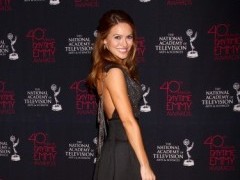 Everyone is waiting to see the debut of Chrishell Stause in her new soap role on Days of our Lives come Mid-August.  While Chrishell is still sworn to secrecy to not reveal much of her new Salem alter-ego, it is difficult not to, especially since the beautiful actress had been taping for a few months now at the NBC soap!

On-Air On-Soaps Michael Fairman caught up with Chrishell at the 40th Annual Daytime Emmy Creative Arts Awards a few weekends ago for this video interview, where we ask the former All My Children star about what she can tell us about her new role on DAYS!

Stause relates:  “I can give you a little bit.  So here is what I am allowed to say … she works in a hospital. She has a big secret.  I work a lot with Galen Gering (Rafe) and Lauren Koslow (Kate), who I love.  I can say she is very opposite of Amanda on All My Children.  So I am playing something completely different!”

At the Creative Arts Emmys, The Young and the Restless current casting director, Judy Blye Wilson won for Casting Direction,  Chrishell took a moment in our interview to honor her, and relieve her casting process of getting her first soap role on AMC through Judy, who was at that time casting the ABC soap.  And, that Judy was also responsible for Chrishell’s BFF, Y&R’s Melissa Claire Egan landing her soap roles as well!

Stause recalled, “Do I remember? Of course I remember.  I am from Kentucky!  So is Judy Blye Wilson, and so we bonded on that.  You have to remember, this is the first time I had gone through the audition process, but I had gone through a lot of rejection before that.   So, I was thinking, ‘free trip to New York’, whatever.  But Judy was so lovely, and made me feel special the whole time.  She told me later she always had her eye on me.”

In addition Chrishell shares her thoughts on the revival of All My Children, working with former co-star, Ricky Paull Golden (Ex-Jake, AMC, now Jesse, B&B) and more!

Watch the video interview below and let us know what you think Chrishell’s role will be on DAYS? And, if you are excited to see her back on daytime!

Kelly Sullivan Clarifies Her Exit From General Hospital … She Has Been Written-Off!

Michael E. Knight On If He Will Return To All My Children!

Love her! I just hope she isnt a new Cassie.

I hope Days is not setting themselves up by making such a big deal by keeping her role a secret for so long. I have seen shows play up so called secrets and they end up being a total letdown. for Day’s sake I hope they know what they are doing because we all know viewers will not have a problem voicing their disappointments.

I loved Chrishell on AMC and I wish that she was part of the online reboot, which has been excellent. But I’m really looking forward to seeing her on Days. She’s not only a gorgeous young woman, but also a very talented actress.

I agree; wish she was on AMC but I have start watching DOL so it is okay.

and I readily admit I’m Gay.

only knowing her from AMC…. I think she is a STAR.

Hot Women – HOT MEN. why we watch Serial. and LOVE.

I’m waiting for Chrishell and Jenn Lilly to come back.

Looking forward to her reveal.

I think there is a lot of storyline if she was indeed Cassie. We would all need to forget how Cassie and Rex were introduced on the show, but could add a whole new dimension to Kate. Since Billie and Austin’s return was not well-received, I would like to see Rex and Cassie come back. I also wish Brandon Beemer (Shawn-Douglas) and Belle would come back. Maybe Jen Lilly is the new Belle?

I hope she is the new Cassie too. That would give so much potential for storyline, especially if she hooks up with Rafe….who has dated both her mom (Kate) AND her TWO of her sisters….(Carrie and Sami)…I mean seriously, Days…can we say drama??

I will continue watching no matter who she plays. DAYS is not a YawneR.

It’s obvious that she’s Cassie and that she’s also Rafe’s physical therapist — since she’s Kate’s daughter and Sami’s sister that would be the logical Days thing to do.